STRIKE BACK STUDIOS ACQUIRES US RIGHTS

TO INSANE CLOWN POSSE DOC “THE UNITED STATES OF INSANITY” 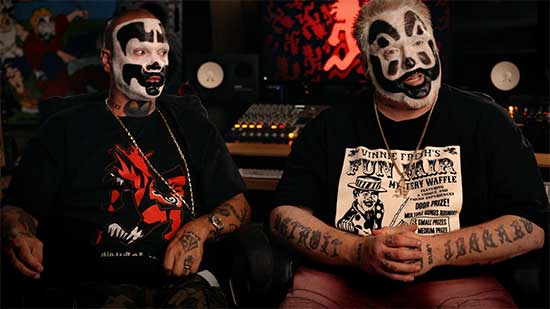 On the eve of its World Premiere at genre festival Fantastic Fest, Strike Back Studios has acquired US distribution rights to THE UNITED STATES OF INSANITY, the outrageous first amendment rights documentary featuring Insane Clown Posse’s Violent J, Shaggy 2 Dope, and their one million die-hard fans (called Juggalos) that were classified as a gang organization by the FBI. Directed by Tom Putnam & Brenna Sanchez, the award-winning filmmakers behind the hit documentary “Burn,” and produced through their company TBVE Films and with Public House Films in association with Hideout Pictures and Realization Films.

The film will have its World Premiere at Fantastic Fest in Austin on September 28 at 6:30pm at the South Lamar Alamo Drafthouse. This will be followed by Strike Back Studios partnering with Fathom Events for an exclusive nationwide premiere in theaters on October 26. This exclusive one-night premiere event will also include a 20-minute, never-before-seen Insane Clown Posse concert footage.

In the film, “The World’s Most Hated Band,” notorious rappers Insane Clown Posse, find themselves as unwitting warriors for the First Amendment after they take on the FBI following the classification of all one million of their fans as gang members. With the help of the ACLU, who filed a federal lawsuit against the FBI, the band fights to uncover the reasons behind the designation and get removed from the gang list as their fans begin losing their jobs, have their children put into protective custody, and face jail time — all because of their musical tastes.

“Our goal is to put the audience through our own paces of discovery during the seven years we filmed with ICP, their fans, their lawyers, and the government agencies pursuing them,” said Producer/Director Tom Putnam. “ICP’s extensive archive of music videos, home movies, documentaries and feature films are layered throughout our movie as well, helping us paint a unique story of two high school dropouts achieved their own American dream while bringing people along for the ride during the seven years we’ve been filming ICP and their fans as they fight for their lives against the FBI.

Noor Ahmed, President of Strike Back Studios said “after forming Strike Back a little over a year ago, we’ve been able to be a part of some amazing documentaries and feature narratives this year, but see ‘The United States of Insanity’ as our signature release of 2021. Having grown up less than an hour south of ICP’s hometown of Detroit in the 90s, I witnessed first-hand their rise to fame and influence. I’m proud to be a part of the fight against any group’s persecution by law enforcement.”

Tickets for the United States of Insanity premiere event can be purchased online at www.FathomEvents.com or at participating theater box offices. A complete list of theater locations is available on the Fathom Events website at that time (Participating theaters are subject to change).