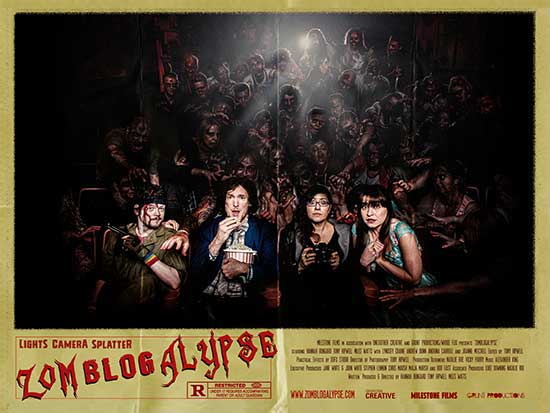 Zomblogalypse will receive its UK premiere at Dead Northern Film Festival – in association with Fangoria and Shudder – at City Screen York on 26 September.

The film follows the chaotic misadventures of an unlikely trio who decide to make a film celebrating a decade of surviving the zombie apocalypse: they soon realise that making movies at the end of the world is even harder than usual.

The feature is an expansion of the original web series Zomblogalypse, begun in 2008 when local filmmaking trio Hannah Bungard, Tony Hipwell and Miles Watts teamed up to make something armed only with a laptop, a York flat and a tub of green face paint. The series went on to clock up over a million views across various platforms, collecting legions of international fans along the way, and ran for four seasons before the team used their ‘filmmaking bootcamp’ of the web series to move onto independent features.

The film adaptation of Zomblogalypse was a labour of love for the filmmaking trio, who share producing, writing, directing and acting duties. Development began in 2012 with Hollywood studio involvement before going into hibernation for several years.

The idea however, like the zombie menace, refused to stay dead. “A film always felt like unfinished business for us,” notes Tony, who also served as director of photography and editor. “The trick was breaking the story: it needed to justify a feature while being manageable on a very tight budget.