Home | Culture | Music | THE DARK SIDE OF THE MOON Reveals First Ever Single and Official Music Video! 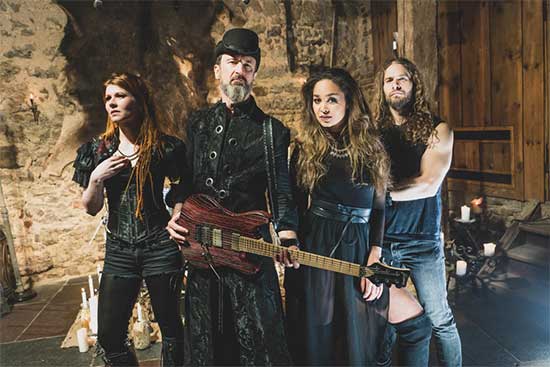 Consisting of Members of Feuerschwanz, Amaranthe and Ad Infinitum

A new band is born! THE DARK SIDE OF THE MOON, consisting of members of Feuerschwanz, Amaranthe and Ad Infinitum, enters the scene with a bittersweet reinterpretation of Florence & The Machine’s Game Of Thrones soundtrack song, “Jenny Of Oldstones”! Multi-talented vocalist Melissa Bonny breathes new soul into the song, playfully switching between soft clean vocals and oppressive growls in her very own manner.
With “Jenny Of Oldstones”, THE DARK SIDE OF THE MOON set the direction to transform musical themes from cinematography, TV shows and video games into powerful and epic modern metal tracks and add completely new elements through the characteristic guitar playing of Hans Platz, as well as the use of the harp. In doing so, THE DARK SIDE OF THE MOON will not limit themselves to cover versions, but will also write original songs.
THE DARK SIDE OF THE MOON on “Jenny Of Oldstones”:
“We are proud and happy to present “Jenny of Oldstones” – you’ve never heard the song from Game Of Thrones like this! Heavy Metal is incredibly expressive, there are so many ways to form a song’s musical and dynamic look – we create the images and emotions in the listener’s mind just by the power of music. From this came the idea to metalize film music – we bring you Cinematic Metal!
We can hardly believe it – half a year ago this song was the result of a bet made by Melissa and Hans, but this song led us to something really big – because of this one song Napalm Records signed us, an international band was formed, and now we are hard at work producing a full album! We’ll show you the dark side of songs you thought you knew!”
It all started with a bet between Melissa Bonny and Hans Platz. Whoever lost owed the other a “dare”. Hans won and challenged Melissa to record a metal version of “Jenny Of Oldstones” with him.  So the band began to turn their favorite cinematic themes into powerful metal songs!
THE DARK SIDE OF THE MOON are:
Melissa Bonny – vocals
Hans Platz – guitars
Morten Løwe Sørensen – drums
Jenny Diehl – harp
Share