The Horrible Imaginings Film Festival Returns With a Dynamic First Wave of Programming! 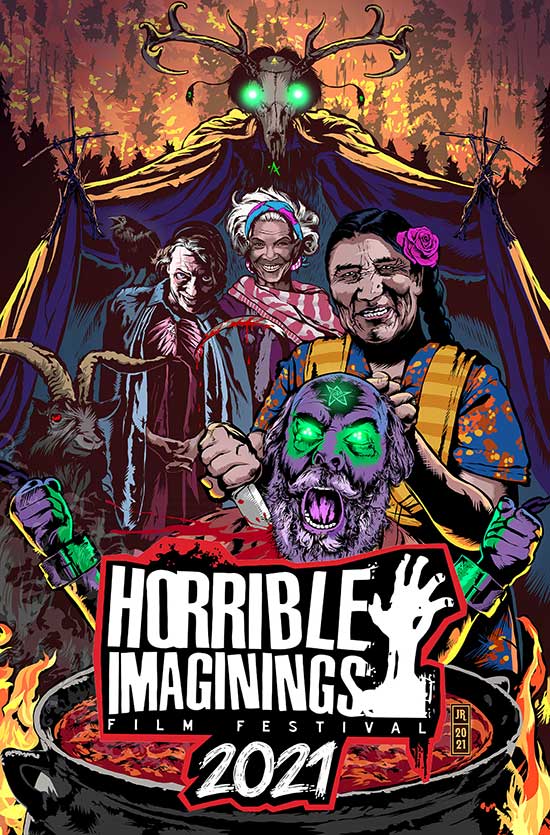 Entering its fourth year in partnership with the “The Frida Cinema,” the Horrible Imaginings Film Festival continues to be a global standard barrier to spotlight genre cinema, amplify artistic voices, and foster a community of acceptance. Returning to a hybrid model for the 2021 edition, the California based film festival will showcase the newest voices in horror, sci-fi, and fantasy genre cinema over a multi-day event that will consist of film screenings, diverse panels, parties, and networking sessions.

“The submissions this year showed a recovery from the drop off after Covid last year. Of course, that also means incredible competition amongst films vying for a tiny portion of available time. This first collection is the merest tip of the iceberg, but we wanted to represent our programming style in this first wave with a wide and eclectic mix of styles, tones, and countries!” – HIFF Festival Director Miguel Rodriguez

The First 11 Selections to the 2021 Horrible Imaginings Film Festival

Liz just wants to host the perfect dinner party, but an unexpected guest sends the evening into chaos, with potentially apocalyptic consequences.
HIFF Programmer Note: “This film starts off playing like an indie, Australian dinner party comedy, then takes a comedic turn into a “The Thing” meets “Invasion of the Body Snatchers” with a surprise gore fest that totally caught me off guard.”
******
Bed – Emily Bennett (9:45/USA)
Seemingly terrified of her own bed, Madeline locks herself in her room for weeks in an attempt to confront her fears. But what begins as an absurd, domestic quest turns into a genuine fight for redemption and revenge.
HIFF Programmer Note: “’Bed,’ is very effective in portraying the aftermath of sexual assault in your own space. It does this without any dialogue spoken or dipping into any clichés.”
******
Dar Dar – Paul Urkijo Alijo (9:52/Spain)
Dar-Dar is a mythical Basque demon that eats fingers. He says: ‘Dar, dar, dar, bring your finger for dinner. If you decline, I will return at nighttime and your soul will be mine’.
HIFF Programmer Note: “’Dar Dar’s’ blend of sound and silent film, making clever use of title cards, bare minimum dialogue, and extraordinary sound design that completely draws the viewer into the film, grabs hold of their guts and won’t release them until the movie is well over.”
******
Her Release – Valentine Miele (3:15/USA)
A woman reaching for love and connection surrenders everything in this blackly comic absurdist nightmare.
4
HIFF Programmer Note: “’Her Release’ is the “rip” on romance that 2021 indie horror never knew it needed.”
******
Hunter’s Cabin – N’cee van Heerden (14:58/Canada)
A young father withdraws to a remote cabin to face his curse alone, but he’s not the only one with a dark past in the woods tonight.
HIFF Programmer Note: “They create a character in a pragmatic light, without undue sentimentality and still manage to make it dramatically compelling.”
******
J’ai Le Cafard (Bint Werdan) – Maysaa Almumin (13:58/Kuwait)
A woman in a downhearted mood struggles to keep up appearances in front of her chirpy and driven office colleagues. An encounter with a dying cockroach in the office toilet develops into an absurd friendship, becoming the comforting companionship she needs until she realizes its destructive effects on her life.
HIFF Programmer Note: “I knew her intent was to explore the ugliness and invasiveness of depression. The treatment of the theme was beautifully done.”
******
Karaoke Night – Francisco Lacerda (7:52/Portugal)
Two sleazy tourists have the night of their lives at a karaoke bar in the Azores when they meet an alluring young woman.
HIFF Programmer Note: “Where do I start, with this left field from hell short film. It really goes to absolute bonkers places that you’re not expecting.”
******
5
Morbus – Kerim Banka (9:38/Canada)
Written by composer Mark Korven (The Witch, The Lighthouse) the film follows a young couple traveling down an isolated road where a hidden evil threatens to contaminate them.
HIFF Programmer Note: “This is how horror is supposed to be! Nothing good will come of it, once you decided to enter in to.”
******
My Religious Family – Brandon Hicks (3:10/Canada)
A Hand-Drawn retailing of a child’s religious upbringing in a religious cult – with a twist ending.
HIFF Programmer Note: “Super entertaining and funny story of what looks like a super “religious” family but keeps throwing twists and turns at you in the most hilarious/horrific way.”
******
The Thing That Ate the Birds – Sophie Mair and Dan Gitsham (11:55/UK)
On the North Yorkshire Moors, Abel, Head Gamekeeper, discovers the thing that is eating his grouse.
HIFF Programmer Note: “Sequence transitions in the editing are perfect, as the audience gets a glimpse of Abel’s failing marriage.”
******
Tumble – Milena Dutkowska (30:00/Poland)
Thirty-year-old Adam still lives with his overprotective mother. Their daily lives are filled with rituals of obedience and codependency. Everything changes when one night a man in a grey suit that is only visible to Adam starts accompanying him.
6
HIFF Programmer Note: “The hapless guardian angel trope is one we’ve seen before, but this filmmaker’s cinematic style and point of view is so strong, that it feels funny and fresh in her capable hands.”