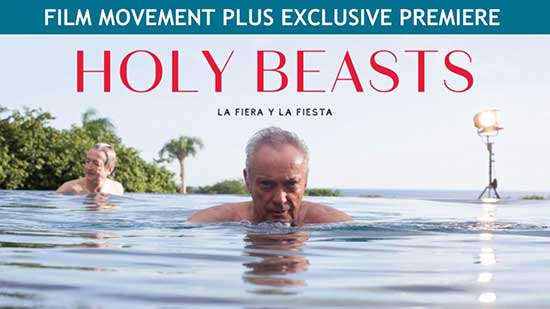 To celebrate Geraldine Chaplin’s birthday (July 31), Film Movement Plus unspools the North American Premiere of one of her latest films, a campy, tongue-in-cheek fictional film-within-a-film in honor of flamboyant and eccentric B-movie filmmaker, writer and theatrical producer Jean-Louis Jorge, an active member of the trendy ’70s underground scene who was murdered by three teenagers in 2000 at the age of 53.

Chaplin plays aging punk diva, Vera, who arrives in Santo Domingo to direct the musical La Palace, one of Jorge’s unfilmed screenplays about vampires and starlets, to be filmed on his home island. Welcoming her are two old friends, a producer and cinematographer Jaime Pina and Udo Kier), both members of the artistic troupe they all started out in. But while the Caribbean production is sumptuous and the musical numbers are grand, mysterious forces threaten the shoot and death begins to creep up on the haunted production.