Los Angeles, CA – In celebration of Pride Month, Brazilian director João Dall’Stella (Stalls, Dia De Las Carpas) has debuted his latest short film, Steam, free for audiences on YouTube. Over the course of 15 minutes, Dall’Stella follows an attractive young couple who decide to spice things up by visiting a bathhouse, only to find a murderous rampage behind the steam instead. 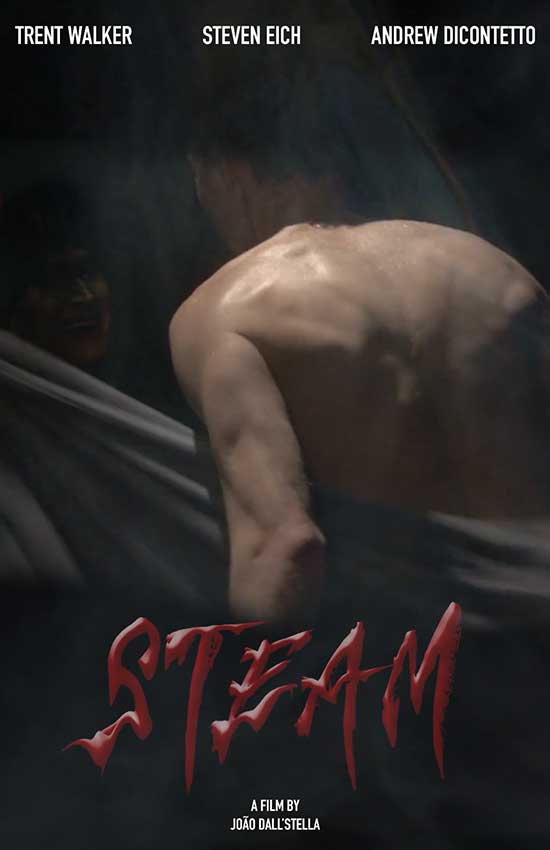 A native of Brazil, Dall’Stella relocated to Los Angeles to start a film career, helming a number of shorts to show his take on life as a gay Person of Color. His AFI thesis film Dia De Las Carpas won the DGA Student Grand Prize for Latino Directors and has been featured in prestigious showcases and festivals such as CAA Moebius, SAG-AFTRA Foundation and Oscar-qualifying film festivals. His short film Stalls has played in more than 50 LGBTQ+ Festivals worldwide. As a member of the Latinx and LGBTQ communities, he began making movies to create his own world where he celebrates them through his stories. His dream is to direct an original film about a gay superhero.

Ahead of the bow, Dall’Stella shared, “Steam is a celebration of the LGBTQ+ community that I’m part of and a combination of personal experiences that I have had throughout my life. It’s fun, thrilling, and scary. It has the perfect combination of love, sex, and death. The horror genre offers a campy quality that fits perfectly with the queer community and that’s why so many of us love horror films.
An imperative aspect was to have a cast of LGBTQ+ actors in the short film because when you created something within the community, you promote change to the industry. We need to tell our own stories without sacrificing the authenticity to please the general audience’s eyes.”

In terms of the future, Dall’Stella has already developed the short film into a horror feature script that has been gaining attraction as a finalist in the NYC Horror Film Festival screenplay contest and part of the NALIP film market. He is excited to share that with the world.