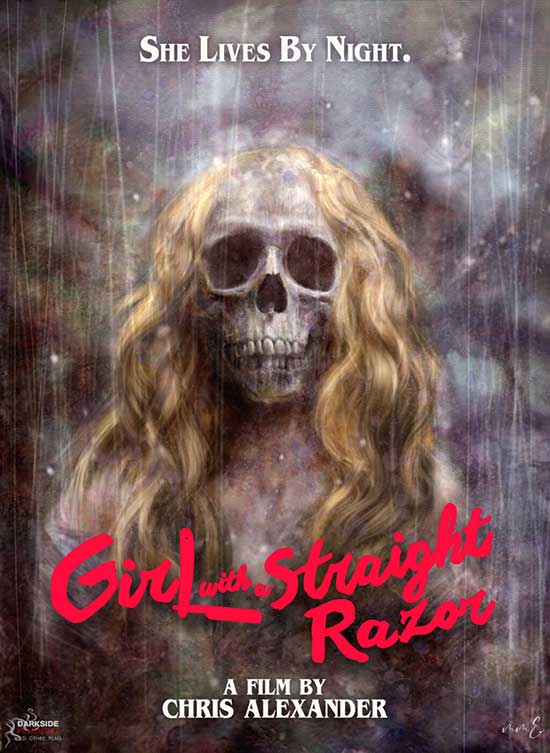 The film will be released on Blu-ray, DVD and VOD on August 17th.

GIRL WITH A STRAIGHT RAZOR is the first original genre production from Canadian horror and exploitation film distributor Darkside Releasing with their new partner, Moleman Entertainment, in what is a joint effort to produce and distribute sophisticated independent low budget genre pictures that emphasize style and substance while also delivering more visceral horror elements.

The official poster art for GIRL WITH A STRAIGHT RAZOR was painted by noted British comic and graphic novel artist Nick Percival (JUDGE DREDD, HELLRAISER, MARVEL ZOMBIES) and the poster design was created by Marc Schoenbach at Sadist Art Designs.

“I consider my work to be a kind of ‘elevated exploitation’ and GIRL WITH A STRAIGHT RAZOR is no exception,” says Alexander, who wrote, produced, directed and composed much of the score.

“Once again, I focus on a female protagonist and sympathetic ‘human monster’ who is trapped in a sort of isolated reality and finds salvation through violence. This time, the isolation was a given, seeing as the picture was carefully produced during the pandemic with minimal cast and crew. The intimacy of the process only added to the texture of the film, really.”

Darkside Releasing will release GIRL WITH A STRAIGHT internationally this summer on multiple formats and platforms.

Chris Alexander is a Canadian writer, editor, music composer and filmmaker. From 2009-2015 he served as the editor-in-chief of the American horror film magazine FANGORIA and is the editor-in-chief and co-founder of cult film magazine DELIRIUM. He is the writer, director and composer of the avant garde horror films BLOOD FOR IRINA, QUEEN OF BLOOD, BLOOD DYNASTY, FEMALE WEREWOLF, SPACE VAMPIRE and NECROPOLIS: LEGION (produced for Full Moon Entertainment). As a musician he has released the albums MUSIC FOR MURDER, BLUE EYES OF THE BROKEN DOLL, THEY DRINK YOUR BLOOD and BODY DOUBLE. For more on Alexander’s work visit www.ChrisAlexanderOnline.com.