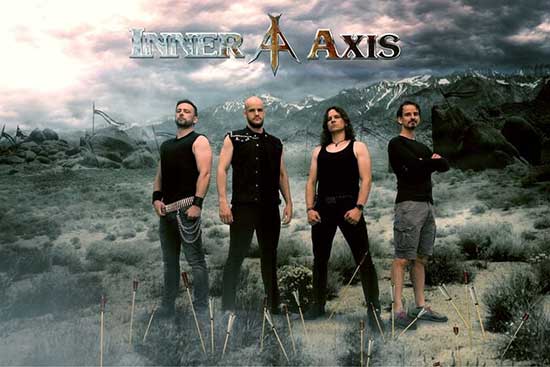 The Heavy Metal band INNER AXIS starts into spring 2021 with two brand new power-driven tracks, released each as a digital single and as double-feature CD and 12” Vinyl-Maxi. Produced in the PITCHBLACK STUDIOS and deliver a perfect genre sound, noticeably enhanced by new band member and guitarist Nino Helfrich (also IRON ANGEL) and Annihilator bass player Rich Gray, who contributes his skills on the two tracks.

For the artwork, the band does not make any compromise by hiring specialist Jan Yrlund, who also worked for Manowar, Apocalyptica, Battle Beast, Bon Jovi und Korpiklaani before.

“Midnight Hunter”, with an instrumental b-side, released this month with a video too. Some additional video specials are also due for release in the following days and weeks. “Midnight Hunter” demonstrates the band’s capabilities to create and perform powerful, epic as well as catchy songs in the spirit of classic 80s metal, which is also emphasized by the cover artwork design and visual presentation of the music video. Besides this female bass player Melissa Cavo is featured in the performance shots of this video.