THE GHOST BROTHERS ENCOUNTER VIOLENT ACTIVITY AT A NOTORIOUS OLD WEST GOLD MINE ON AN ALL-NEW EPISODE OF GHOST BROTHERS: LIGHTS OUT 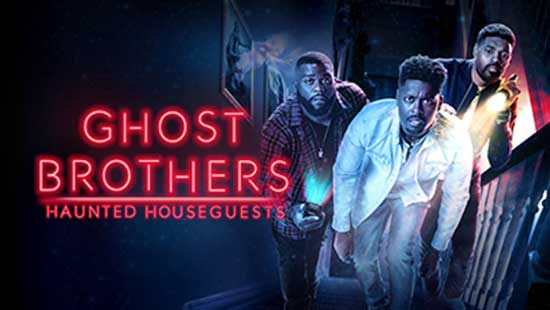 Each episode of HAUNTED HOSPITALS tells chilling tales of paranormal activity inside hospitals, nursing homes, morgues and medical institutions. Past patients suspended between this world and the next, departed medical professionals who insist on overseeing their wards long after death, spirits roaming corridors to signal unfinished business with their presence – these terrifying stories are told by the medical professionals and patients who experienced them. These are not random encounters, but part of paranormal patterns experienced by hospital staff all over the world. [Hour-long episodes]

SEASON PREMIERE: “Dance of Death, The Feeder and Swept Away” – Begins Streaming Friday, May 7

The ghost of a young man who died while fighting for social justice returns to seek closure. A near-death experience opens a patient up to the paranormal. The otherworldly cries of a distressed infant haunt a pregnant woman after she is rushed to the hospital.

A personal support worker on the night shift is stalked by an energy-sucking entity. A nurse in a Catholic hospital encounters the tormented soul of a nun. A man is chased through an abandoned psychiatric hospital while on a service call.

A nurse is taunted by the ghost of a child who died while in her care. The spirit of a psychiatric patient implores a young boy to play. A bedridden patient spends a sleepless night in the company of terrifying ghost twins.

With people the world over using cell phones, CCTV and dashcams, more paranormal phenomena is being captured than ever before. In this series, viewers will hear firsthand from those who recorded the remarkable footage and meet experts who will attempt to explain the – often terrifying – unexplainable. [Hour-long episodes]

SEASON PREMIERE: “UFOs in the Forest, Sightings by the Sea and Demon in a Box” – Begins Streaming Sunday, May 9

UFO hunters become the hunted, deep in England’s notorious Rendlesham Forest. The gruesome remains of a mermaid wash up on a beach in the United Kingdom. A demonic box wreaks havoc in Florida.

A guitar shop in England is rocked by ghostly goings-on. A man collapses from a suspected possession at a haunted cemetery. A spectral hound confounds a couple in Texas.

“Poltergeist in My House, Creepy Cottage and Deathly Dolls” – Begins Streaming Sunday, May 9

Homeowners discover they have an unwanted house-ghost. Paranormal investigators attempt to contact famed occultist Aleister Crowley from beyond the grave. A New Jersey woman shows off her creepy collection of haunted dolls.

In each episode of GHOST ADVENTURES, Zak Bagans and Aaron Goodwin, along with A/V techs Billy Tolley and Jay Wasley, travel to a different haunted destination where they meet with locals, eyewitnesses and experts in an attempt to piece together the haunted history of each site. They then begin their “lockdown” investigation, using the latest scientific gadgets and technology in an effort to obtain physical evidence of the paranormal and uncover the truth behind each haunted mystery. [Hour-long episodes]

Zak Bagans and the crew board a steam ferry from the 1800s to investigate escalating paranormal activity. The staff fears something dark has awakened on the historical vessel after lying dormant for months during the COVID-19 pandemic.

Some of the most amazing, eye-opening and downright scary paranormal videos from around the world are featured as a panel of experts break down the footage and analyze what exactly the eyewitnesses captured. Insights from some of the most knowledgeable specialists in the field and firsthand accounts from the people lucky enough – or perhaps unlucky enough – to witness these strange phenomena for themselves just might make a believer of even the biggest skeptics out there. [Hour-long episodes]

A woman in Tennessee finds out she is not alone while working from home. A child-like demon creeps up behind a man and his friends in Indonesia. A British couple realize that ghostly activity in their home may be connected to an ancient burial ground nearby.

“Skinwalker Stalks a Cowboy in Arizona and More” – Begins Streaming Friday, May 7

A cowboy narrowly avoids a brush with a scheming skinwalker. Multiple UFOs loom large over San Diego. A family in Malaysia is petrified when an unknown creature slithers out of a toilet.

The Ghost Brothers – Dalen Spratt, Juwan Mass and Marcus Harvey – are flipping the switch in their new discovery+ series GHOST BROTHERS: LIGHTS OUT. The dopest brothers on television hunting ghosts, these candid and unorthodox paranormal investigators explore disturbed hotspots across the country, checking out and sizing up local legends and supernatural stories. They are ready to expose the haunted holdouts still hanging around these locations … and why they don’t leave. Marcus and Juwan kick off each investigation by entering haunted sites without any prior knowledge of the paranormal territory they are walking into. Dalen, on the other hand, knows all the creepy history. Observing from his own mission control center, he guides his friends through the most active areas of the property. Going in blind, Marcus and Juwan must discover for themselves what matches up with the legend and what does not. [Hour-long episodes]

Dalen Spratt, Juwan Mass and Marcus Harvey venture to Vulture Mine to dig into the haunting at the Old West’s most notorious gold mine. But the unexplained activity turns violent, injuring the crew and making the Ghost Brothers the target of a dangerous presence.

“Go to the Light” – Begins Streaming Saturday, May 8

Dalen Spratt, Juwan Mass and Marcus Harvey dive into the Gulf Coast’s Pensacola Lighthouse to shine a light on the horrific haunting. But as the Ghost Brothers illuminate the site’s past and paranormal presence, they find the lighthouse itself may play an unexpected role.

Jack Osbourne and Katrina Weidman face all-new eerie encounters in the return of PORTALS TO HELL. The avid paranormal investigators resume their chilling journey to haunted locations across the United States, confronting the dark side of the supernatural as they seek concrete evidence that a spirit world exists. In each episode, Osbourne and Weidman dive headfirst into a site, examining unusual incidents while utilizing specialized technology and a network of experts, including psychic mediums, in their search for answers. [Hour-long episodes]

Jack Osbourne and special guest investigator Heather Taddy visit Lake Shawnee Amusement Park in Princeton, West Virginia, one of Travel Channel’s Most Terrifying Places in America. The team is in for a grim ride at this abandoned park that has six deaths in its history, and is also part of a Native American burial ground. Psychic Michelle Belanger assists.

Jack Osbourne and special guest investigator Heather Taddy travel to Bakersfield, California, for a stay at the five-star Padre Hotel, a Prohibition-era inn that has never been investigated for television. Uncovering a dark and deadly past, the team, aided by psychic Michelle Belanger, soon learn that not all of the hotel’s guests are living.

The programs below will premiere on Travel Channel as follows: