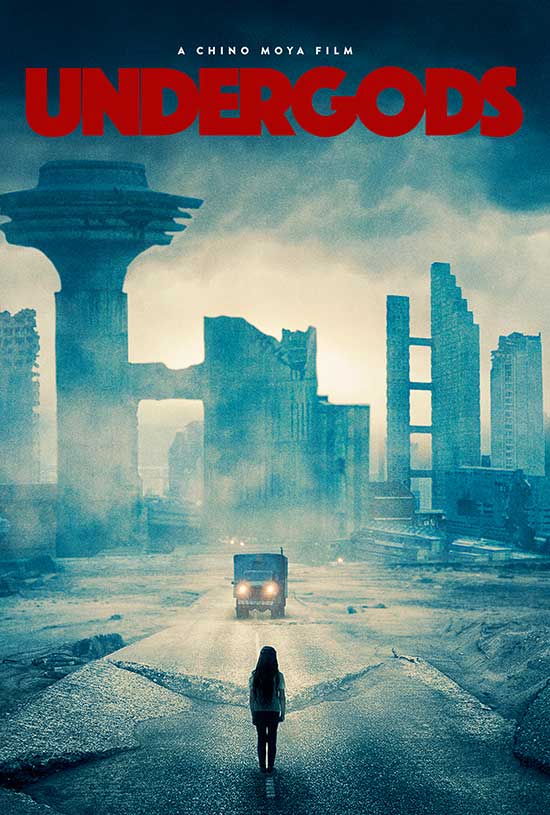 The poster and trailer have been shared for new dystopian fantasy-thriller, Undergods, which will be coming to cinemas and digital download on May 7.
Following its world premiere at Fantasia last year, the film went on to celebrate its UK premiere at Glasgow Film Festival in February. Since then, Undergods has gone on to receive two British Independent Film Award (BIFA) nominations.
From May 7, Undergods will be released day-and-date; in select cinemas nationwide and On-Demand simultaneously. A limited-edition Blu-ray and vinyl soundtrack are also planned for later in the year.
Undergods stars Kate Dickie (The Witch, Game of Thrones), Ned Dennehy (Mandy, Peaky Blinders), Geza Rohrig (Resistance, Son of Saul), Burn Gorman (Pacific Rim, Enola Holmes) and Tanya Reynolds (Emma., Sex Education).

In a futuristic, post-apocalyptic world, K and Z roam the streets on the lookout for corpses and something even more valuable – fresh meat.

Made with the support of the BFI using funds from the National Lottery, the Wallonia Brussels Fund for Audiovisual and Cinema, the Estonian Cultural Fund, the Estonian Film Institute, Sweden’s Film I Vast and in association with the UK’s Sharp House, the film is produced by the UK’s Z56FILM in co-production with Velvet Films (Belgium), Homeless Bob Production (Estonia), Media Plus (Serbia), Filmgate Films (Sweden) and Ridley Scott Creative Group’s Black Dog Films and RSA Films.
Director Chino Moya also shared his excitement about the upcoming release saying “This is a collection of uncanny tales that will be released in one of the uncanniest periods of our lifetimes. I hope to entertain the audiences as I take them out of their comfort zone.”
Undergods will be in select cinemas and On Demand from May 7
#Undergodsthefilm

Short Synopsis: In a futuristic, post-apocalyptic world, K and Z roam the streets on the lookout for corpses and something even more valuable – fresh meat.