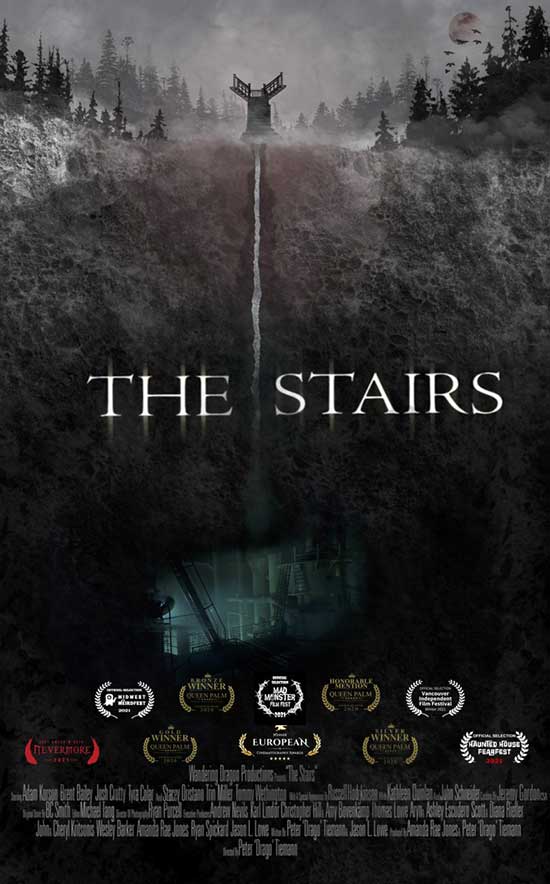 After a great reception on the horror festival circuit, Cinedigm Corp (NASDAQ: CIDM) announced today that it has acquired all North American rights to the horror film THE STAIRS. Twenty years after a mysterious disappearance, a group of hikers unknowingly stumble upon a long-forgotten evil in THE STAIRS. The film is anchored by a cast of acting veterans, led by John Schneider (The Dukes of Hazzard) and Academy Award® nominated Kathleen Quinlan (Apollo 13); it also features Adam Korson (Imposters), Brent Bailey (Agents of S.H.I.E.L.D.) and Stacey Oristano (Friday Night Lights). This chilling new film will be available on demand and digital this Summer.

What started as a week’s long adventure with friends, quickly turns into a terrifying fight for survival in THE STAIRS. In 1997, a young boy is out hunting with his grandfather (Schneider), when he stumbles upon a mysterious staircase deep in the forest. The subsequent disappearance leaves locals baffled as to the fate of the wayward pair. Twenty years later, a group of hikers set off on an ambitious trail, deep into the same stretch of wilderness. With each step away from civilization, they are pulled deeper into the treacherous trap of the mountain terrain where they stumble upon the same set of ominous stairs. Descending deep below the earth, they find themselves coming face to face with the thing that nightmares are made of.

“I am thrilled to finally be able to share THE STAIRS with everyone,” said the first-time director, Tiemann. “I fell in love with horror as a young boy, and soon found a way to turn my passion into a career. For this story, I wanted to give the cast, crew and audience a visceral experience, and I hope you enjoy watching it as much as we enjoyed making it.”

“THE STAIRS truly delivers for horror fans looking for a movie with real scares, suspense and a terrifying conclusion,” said Melody Fowler, Vice-President of Acquisitions for Cinedigm. “Along with its satisfying story and well-developed characters, the film features superb stunts and inventive creature design and effects.  All of these elements together elevate THE STAIRS, and the film’s strong festival reception with genre fans further confirms that it is a must-see.”

This film is currently on the festival circuit, and as of this press release, has been the Official Selection in 9 Film Festivals with 14 nominations and 12 wins including Best Picture (Audience Award) at Nevermore Film Festival. In addition, THE STAIRS was just nominated for 6 awards at the HorrorHound Film Festival – Best Directing, Best Writing, Best Cinematography, Best Sound Design, Best Special Effects Feature and Best Feature Film.  Winners will be announced on March 21st.

The deal was negotiated by Melody Fowler, Vice-President, Acquisitions, on behalf of Cinedigm, with Amanda Rae Jones and Peter ‘Drago’ Tiemann, on behalf of Wandering Dragon Productions.