Scandroid’s “Dark Tide” featuring Megan McDuffee is boldly reimagined in this brand new remix from Cassetter. The introspective atmosphere and a stunning vocal duet of the original take on a new dimension within Cassetter’s patient and meticulously crafted production. The Cassetter remix of “Dark Tide” is out now on all platforms from independent retro synth label FiXT Neon. 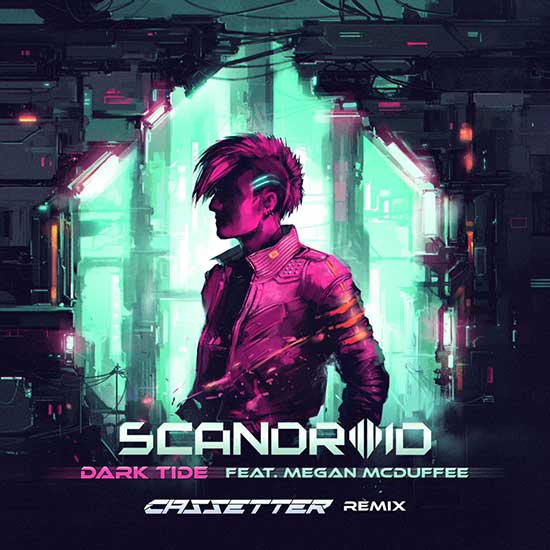 “My approach to this remix was quite different than any of the remixes I have done before. I listened to the original version only once, to not subconsciously copy the initial melodies or notes. Listening to vocals of the best synthwave vocalists out there made gave me so much inspiration, that I made the whole track automatically, with the intention of taking the listener into the cyberpunk world.” – Cassetter

The original “Dark Tide” (feat. Megan McDuffee) appears on Scandroid’s The Darkness and The Light and was released in December of 2020.

Cassetter released his first full-length album, The Fugitive, in 2019. The recording established him as a forward-thinking creator with a unique sonic identity, and an enthusiastic audience put hundreds of thousands of streams on the album within weeks of its release. This was followed by a second full-length album in July 2020. Entropy marks the continued evolution of Cassetter’s sound, pushing further into unique production and songwriting styles while maintaining a clear connection to the artist’s synthwave origins. With placements in Spotify editorial playlists and a diehard fanbase growing on YouTube, Cassetter continues to expand his audience while helping to redefine retro synth music for a new decade.