The song itself is about dead-end jobs and the cult of productivity. This theme runs throughout her forthcoming EP, Anhedonia due out later this year. In this case, it’s about climbing senseless corporate ladders and sacrificing things one loves in order to perform at work, to survive and to stay afloat. 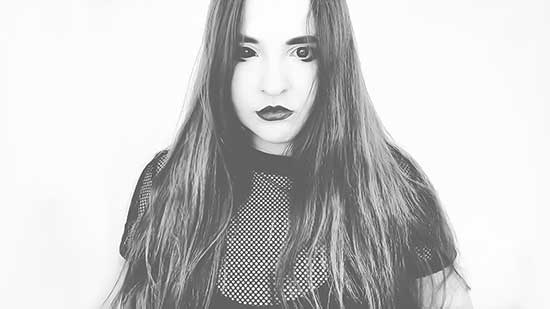 About the forthcoming EP, Anhedonia:

Anhedonia, scheduled for release in July 2021, will be the first concept EP to be originally released under the name of ALIA SYNESTHESIA. Paying homage to the sounds of the 90s (trip-hop, NIN, The SugarCubes, Bjork) Alia brings in the combination of pop and operatic vocals, distorted cello riffs, and booming, danceable basslines.

In Psychology, “anhedonia” refers to inability to experience pleasure or loss of interest in pleasurable things. It’s linked to depression and other mental health disorders. ALIA SYNESTHESIA conceptually explores anhedonia of modernity, with all it’s silent hysterics and mental storms, not only as a de-contextualized nebulous tendril of clinical depression, but as an every day side effect of mental battles for purpose and meaning within the grinding cult of productivity.

Anhedonia will be released in two editions, White (standard edition) and Black (limited to 20 copies only). There are slight differences between the editions that provide different context to each. Both editions are available for pre-order on the project site: anhedonia.koncept.wiki/.

Alia is Yakut (Siberian first nations), and was born and raised in North Siberia, where she started her music education at 6, subsequently immigrating to Canada at the age of 14. Although classically trained, her first musical exposure was to electronic music.

Alia released her first solo record titled Kingdoms Fall in 2017 under the project name Subterranea. Shortly after, two more records under different project names have followed, Banshee (2017), a synthmetal relese, and DataVVitch (2018), released first as anonymous record. Ever since, Alia has been touring the world from Hawaii (2017) to New Zealand (2018) and Japan (2019) as a live member of industrial/darkwave UK pioneers ATTRITION (Coventry, UK) and her neoclassical symphonic dungeon synth project Subterranea.

In her home city of Toronto, Alia opened for the father of dungeon synth Mortiis (2019), as well as black metal/heavy metal band Malokarpatan from Bratislava, Slovakia (2018). Due to versatility and uniqeness of Alia’s sound, she performed with metal bands, goth/darkwave and industrial bands, witch house acts (Valhall), synthwave acts (Dana Jean Phoenix), and dark ambient/experimental acts like Northumbria, Uxvae, and Darsombra.

Alia’s voice is often described in reviews as ‘siren-like’, haunting and beautiful, yet powerful and deep. The compositions she weaves range from tribal and hypnotic, to complex, nightmarish, avant-garde and multi-layered, laced with her signature baroque vocals.