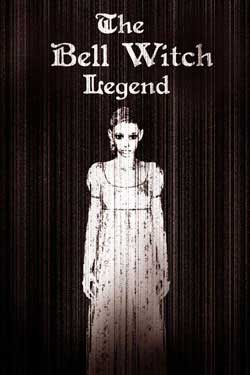 SYNOPSIS:The Bell Witch is a ghost story of American Southern Folklore. It’s a tale of a sinister spirit who haunted the Bell family in Robertson County, Tennessee for a period of four years. The haunting’s involved spectral creatures, disembodied voices, unbelievable violence, and even resulted in the death of John Bell… all at the hands of the infamous Bell Witch.

The Bell Witch may or may not sound familiar. However it should. The original inspiration for the film “The Blair Witch Project” and also the recent “An American Haunting”. The film we are reviewing today is the independent release titled: “The Bell Witch Legend”. Now to clarify, this indeed is a documentary. Rather than a film or “mockumentary” which you are all too familiar with from the Blair Witch Folks.

The doc released by SkyDive Films and directed by Zac Adams runs 42 minutes and is pretty fascinating to say the least. As far as documentaries go this one is pretty scary. I say that because these are real folks with real stories that upon hearing them tend to creep you out. A small town with a big dark history. All originates from the past and a curse issued on the Bell family long ago in the 1800’s upon John William Bell. Now I did look into this as the reports are fascinating and found the following info posted on wikipedia:

According to the legend, the first manifestation of the haunting occurred in 1817 when John William Bell, Sr. encountered a strange animal in a cornfield on his large farm in Robertson County, on the Red River, near Adams, Tennessee. The animal, described as having the body of a dog and the head of a rabbit, vanished when Bell shot at it. This incident was quickly followed by a series of strange beating and gnawing noises manifesting around the outside, and eventually inside the Bell residence that did not stop until 3 a.m (witching hour). Betsy Bell, the family’s younger daughter and the only daughter still living at home (Bell’s oldest daughter Esther married Alexander Bennett Porter July 24, 1817 when she was 17), claimed to have been assaulted by an invisible force.

An artist’s drawing of John Bell’s death, originally published in 1894. In the foreground one can see a couple of men feeding the family cat with some of the unidentified liquid which was found near the body of John Bell. The cat died.

John Bell Sr., later in life, suffered frequent facial seizures, often rendering him speechless. John Bell, Sr. died on December 20, 1820. A small vial containing an unidentified liquid he had apparently been given or ingested thinking it was medicine was found near the body. When some of the contents were force-fed to the family cat, the animal died immediately; the bottle was then thrown into the fireplace. At the funeral, people could hear the Bell Witch laughing and taunting the pastor.

Pat Fitzhugh’s retelling of the Bell Witch legend concludes with a statement to the effect that many people believe that the spirit returned in 1935, took up residence on the former Bell property and remained there through the present day. He notes “the faint sounds of people talking and children playing can sometimes be heard in the area” and asserts that it is “very difficult to take a good picture there.” Other sources have said that 1935, the year when the witch claimed it would return (“one hundred years and seven” past 1828), brought nothing out of the ordinary to the Bell descendants living at the home who’d been anticipating some great disturbance.

This at least updates you on the history portion. As the doc rolled on, you could really see the truth and fear in these peoples eyes as they spoke about the Bell Witch. And to further clarify, the Bell Witch was no witch at all but rather a poltergeist spirit with a mean temper. A vengeful one at that. Reports in the film go on to state incidents that have happened but to numerous occasions. One man states that it is forbidden to remove a stone from the Bell Witch cave or as to encounter misfortune. This is accompanied by stories to back this telling up such as folks who ignored warnings and paid the price.

I really enjoyed this and think you will all to. You get a full dose of history from the folks who live there and have researched it. It’s definitely not your tourist thriving location, however films such as these and others have brought alot of outsiders to see it all first hand and experience a piece of it for themselves.

The documentary is shot in basic doc form with cuts back and forth to ongoing stories, shots of the town and Bell Witch clippings. They have also enlisted actors to play out some of the past tales on screen. Though the appeal isn’t so much visual as it is hearing real accounts of the unknown. Enough that you might not sleep so well afterwards. Chilling, creepy and shocking!

On a side note, for those looking to delve more into the background, there seems to be many pages that go into great detail on the legend and its past haunting’s.