In the film’s story, Jennifer (Rachel Weber) is living alone in a large, empty house while struggling with depression after a recent loss. She is trying her best to deal with the hand that life has dealt her. On the eve of a major thunderstorm, Jennifer accidently locks herself in the basement. As water begins to flood in and quickly rise, Jennifer soon finds herself in the ultimate fight for survival! 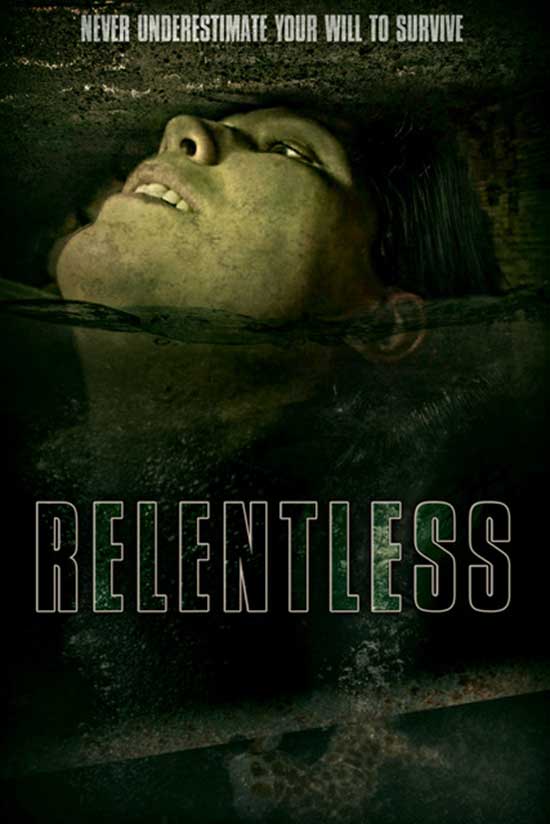 Director Barry Andersson has talked about the challenges of filming, recently. Andersson says of RELENTLESS: “I loved exploring the basic idea of what we, as human’s value when faced with a personal tragedy. What do we hang onto and when do we need to let go of things? We set up the house to be a metaphor for these very questions. The upstairs represents things we worry about every day such as paying bills, charging our devices etc.”

Andersson also mentions the influence of the setting on the film’s story. Andersson has said: “but, what I find strange is that those are the very things, that if we were stranded on a desert island, we wouldn’t give a second thought. In the basement, we had boxes and shelves of memories of people that were lost in the character’s life, which, like most of us tuck away and only revisit from time to time. This all leads to the climax of the film where once life’s challenges become all-encompassing it forces Jennifer to let go of everything and focus on surviving and saving herself.”

Terror Films’ President Joe Dain spoke of the film’s release, as well. Dain said this week: “we had to decide what label this film made sense for. Though, RELENTLESS might not be seen as a traditional horror film, it does deal with the horror of loss and loneliness, while also tackling our basic human instinct to survive in a harrowing and desperate situation.”

The film will hit digital platforms on Friday, November 27th. In advance of the release, TERROR FILMS is giving fans a first look at the: official trailer, poster and several stills.