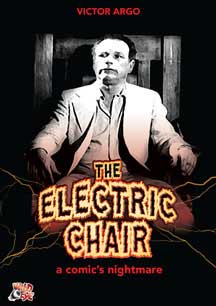 A true lost treasure of New York City filmmaking at its most inspired, sarcastic and dark.
Noir-laced with shades of both Scorsese and Jarmusch.

“Electric Chair” – a Bukowski-inspired tale from the New York underground – is a lost independent film, recently unearthed by Wild Eye Releasing and distributed by MVD Entertainment Group. It was originally a one man show that played off Broadway. Initially, Harvey Keitel was slated for the starring role but due to another personal commitment, he recommended the role to his friend Victor Argo.

In the film, Argo (Ghost Dog, Taxi Driver, True Romance) is a shoe store manager who attempts to revive a failed career as a stand-up comic by performing – thanks to his ex-friend and sometimes agent, Sheldon-at a mysterious club where he finds himself sharing the stage with a looming, ready-to-shock electric chair… and performing before an audience of himself as a young boy, his mother and others from his past. During his nightmare routines, nothing that comes out of his mouth is funny until he turns the comedy on himself.

Before his death in 2004, Argo was a prolific character actor in a string of art house and action fare – a favorite actor for directors Martin Scorsese, Jim Jarmusch and Abel Ferrara – he can be seen in films such as Bad Lieutenant, Ghost Dog, The Last Temptation of Christ, True Romance, Taxi Driver and many more.

Director Mark Eisenstein was once Christopher Walken’s professor in college, and takes credit for talking Walken into quitting school to pursue his acting career. For “Electric Chair”, Eisenstein ‘borrowed’ all the film equipment from the college where he taught filmmaking. Eisenstein is also directed the unreleased feature, “God Is on the Other Side”, starring David Johansen of the New York Dolls.

“Electric Chair” will be screening at 92YTribeca on Friday, Oct 15, 2010 at 7:30pm. It will be held in the 92YTribeca Screening Room at 200 Hudson Street and admission is $12.00. Director Mark Eisenstein will be on hand for a post-screening Q&A. Ticket Info: tiny.cc/szqx4

“Eisenstein’s dark comedy features a powerfully honest performance by the late, great Victor Argo and struck a chord somewhere between Lenny and The King of Comedy.” – Austin Underground Film Festival