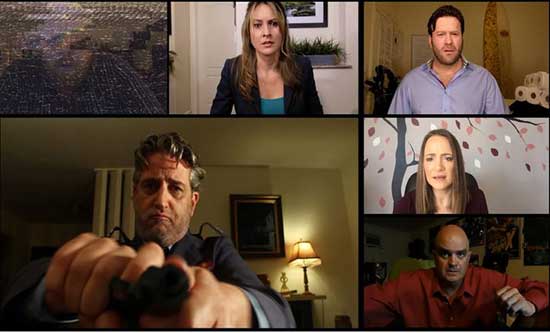 It was only meant to be two weeks. Then two weeks became ten months. The pandemic led to paranoia … then paranoia became the pandemic.

“Social Distance” is a voyeuristic look into the lives of six people working from home while in quarantine during the 2020 pandemic. Each must battle the destructive demons of isolation, addiction, jealousy, and conspiracy.

Worldwide release in more than 100 markets on November 21 on VOD, DVD and Blu-Ray.

The Fact and Fiction Behind SOCIAL DISTANCE

We thought it would be interesting to share some background on SOCIAL DISTANCE and reveal how this movie, made on a shoestring budget, came to fruition. The movie was first conceived shortly after quarantine started back in March 2020. Filmmaker, B. Luciano Barsuglia, and an actor friend, Jed Rowen, were having discussions about the pandemic, the shelter-at-home orders, and the direction the circumstances were taking them.