Cannibal Comedian is a horror epic with an undertone of dark comedy. Set in modern day Western USA, the film will allow us to explore the intertwining of over- the-top humor and rampaging horror at full throttle. It will combine the pure terror of hearing Leatherface’s chainsaw with the gut-busting laughs of a classic Jim Carrey film. Littered with scary, grotesque and wildly energetic characters, Cannibal Comedian is a love letter to horror and “stand-up” comedy. 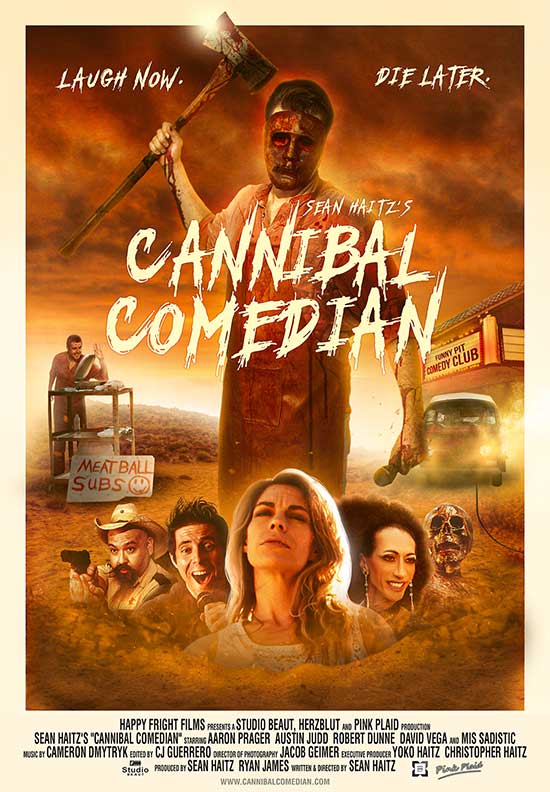 In Cannibal Comedian, A psychopathic cannibal, fed up with his lack of ambition, tries his hand at stand- up comedy in an attempt to satisfy his appetite for normalcy. Aaron Prager stars as Charlie (the titular Cannibal Comedian) alongside Austin Judd, Robert Dunne, David Vega and Mis Sadistic.

The film is shooting for an early 2021 release.

I have been passionate about making movies since the age of nine when I picked up my first video camera. I haven’t put it down since! My first film with a production team was a twenty- minute short called SWAMP ZOMBIE. I rallied up my friends and family to help be the actors and crew members. I was thirteen at the time. Growing up I’ve always loved Halloween. When I was ten, my friends and I decorated a haunted yard for the neighborhood. I dressed as Freddy Krueger and instead of wearing a mask I used warm liquid latex on my face to make it more realistic. I got such a thrill from jumping out of the dark and scaring people.

My first film to gain notoriety was MANGROVE SLASHER 2, a forty-seven-minute horror/shlock comedy. The budget was $600 and a bucket of blood. It sold out all three showings in the Sarasota Film Festival and received a cult following from tons of horror news coverage.
My first feature length film BIG TOP EVIL had a fifty-thousand-dollar budget and was picked up by Gravitas Ventures Studios with a worldwide release. (Now available on demand and Blu-Ray.) In the film we have a cameo from horror icon Bill Moseley. I love making movies and music too! I am also a singer/songwriter using my original music in my films.