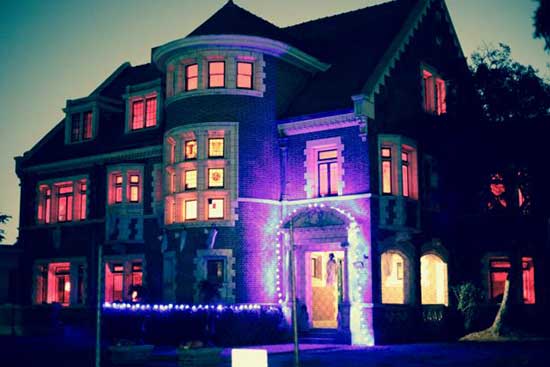 With this week’s announcement that The Infamous American Horror Story Murder House will open to the public for the first time ever, homeowners Dr Ernst von Schwarz and his wife Angela Oakenfold have now revealed the list of participants for the three-day, 24-hour first-ever live stream event from the notorious historical Los Angeles monument. Watch a preview of the livestream here.
Kicking off at dusk Thursday, October 29 and closing out at sunset Sunday, November 1, The Murder House livestream event will feature 15 cameras set up throughout the 10,000-square foot home streaming live throughout the entire weekend.
Beyond The Murder House live stream, viewers will see daily programming (details below). While the live stream is open to all via the ticketed event, The Murder House will open its doors to a few lucky ticket holders. Six fortunate (or unfortunate)–two per each of the three nights–Murder House fans in the terrifying basement all while being live streamed to the world (while a doctor monitors their vital signs and psychological condition).
An initial outline of the weekend’s events is as follows:
●The first-ever paranormal investigation will be carried out by Exorcist Bishop James Long, who has appeared on “Ghost Adventures,” “The Possessed,” “Gates Of Hell,” “Exorcism Live!” and “Portals To Hell”
●Famous psychic and white witch Patti Negri from “Ghost Adventures” will lead the houses first-ever seance
●Michelle Belanger, vampire expert and acclaimed author who has been seen on “Paranormal State,” “Portals To Hell “ and “The Real Vampire Files” will delve into the haunting world of the occult
●Prolific historian and Halloween expert Lisa Morton will take us on an exploration of the history & traditions of Halloween
●Tarot expert Sasha Graham will explain the world of tarot and one lucky ticket holder will get a virtual reading live on air
●Energy healer Satish Dholakia will give advice on how to protect yourself from negative energies and unwanted evil entities
●Psychiatrist Dr Waguih Ishak will discuss the addictive nature of horror and the pathology of fear
●Homeowner and cardiologist and Professor Dr Ernst von Schwarz will delve into the history of medieval torture techniques
Tickets are on sale now at www.themurderhouse.com. In addition, a commemorative t-shirt for the event will be on sale on the website. A portion of proceeds from the event will be donated to the Baby2Baby charity.
Website
Instagram
Twitter
TikTok
Share