Over the course of six boxed episodes, players will receive a variety of cryptic documents, audio recordings, physical clues, and unsetting puzzles to help them find out what happened in this terrifying immersive experience. 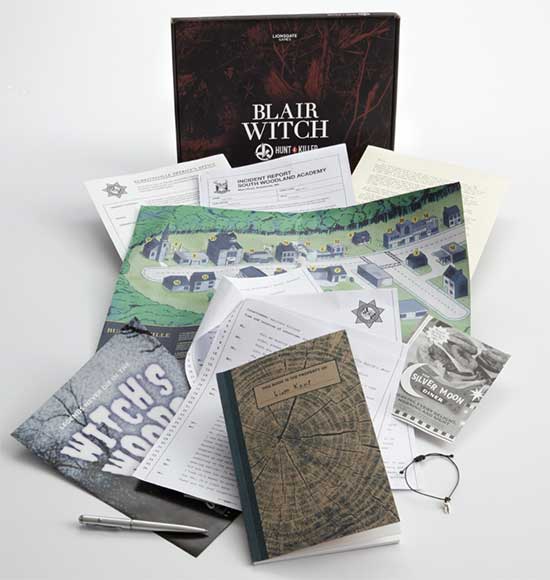 Hunt A Killer Horror: Blair Witch is currently available to sign up for early access and will be officially available on Thursday, October 1st, just in time for Halloween.

September 29, 2020 – SEATTLE, WA – Is Burkittsville still hiding the dark and mysterious secret of the Blair Witch? What is still lurking in those haunted woods? Now, a new game by Hunt A Killer, the makers of the popular mystery, sci-fi, and horror themed games, lets players discover the frightening history of the Blair Witch for themselves.

Hunt A Killer has partnered with global content leader Lionsgate (NYSE: LGF.A, LGF.B) to release the new Blair Witch table-top experience. This is Hunt A Killer’s first time partnering with an entertainment company on a storyline, incorporating the iconic Blair Witch universe into their line of horror themed games. The game will be a part of Hunt A Killer’s subscription-based offerings, granting players the opportunity to become Members in their gaming community.

“We are thrilled to partner with Hunt A Killer to continue expanding the world of Blair Witch into games,” said Daniel Engelhardt, SVP of Lionsgate Interactive Ventures & Games. “Their creative approach and mechanics are a natural fit for a franchise defined by unique storytelling, and represents a special way for us to build upon the narrative of the video game we launched last year.”

In this new season, players become detectives to solve a missing persons case near the infamous Black Hills Forest. The storyline begins with an introduction to Rosemary Kent, a woman who lives near the edge of the forest and is looking for help to find her missing son. Over the course of six boxed episodes, players will investigate the mysterious woods and learn about any disappearances, while finding out more about the powerful forces that reside there. From there they must piece together the clues, face the horror of the Blair Witch and those who serve her, and find out if they can survive the woods.

Each month, a new boxed episode will be delivered to the Member’s doorstep, and they must work to unfold the story while sifting through a variety of cryptic documents, audio recordings, and unsettling puzzles. By the end of the season, enough horrific clues will have surfaced to help solve the case. Along the way players will have access to resources and can join the Hunt A Killer private Facebook community to ask for tips and socialize with others playing the game.

“We are excited to share this new season with our Members and the fans of the Blair Witch films,” said Ryan Hogan, CEO and Co-Founder of Hunt A Killer. “Lionsgate is a great partner for us, and the hair-raising story we have created together is sure to provide the perfect immersive experience for a thrilling game night with friends or family.”

Hunt A Killer worked with horror producers, Jason Egan and Patrick Rizzotti to broker the Blair Witch deal which was negotiated by SVP Business & Legal Affairs, Eva Feder, for Lionsgate.

ABOUT HUNT A KILLER

At Hunt A Killer, our mission is to revolutionize the entertainment industry by challenging conventional forms of storytelling. We provide interactive entertainment experiences that position participants as detectives looking to solve thrilling stories revolving around sci-fi, horror and mystery. Learn more at: www.huntakiller.com/.