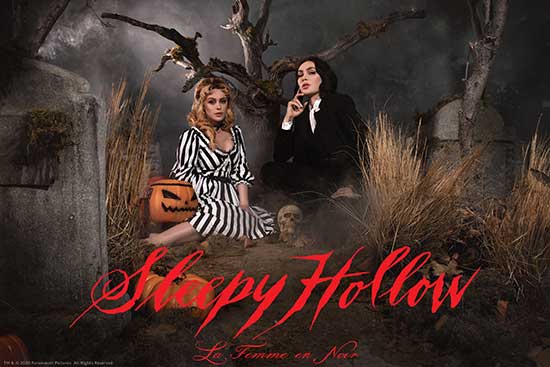 Paramount Pictures and Los Angeles-based apparel company and high-end goth fashion house La Femme en Noir have announced today a licensing partnership for the Sleepy Hollow property for apparel and accessories, which kicks off with an exclusive Winter Collection.

“It is really unique with a very specific style that is unlike anything done before,” expounded Pitt of the Sleepy Hollow Winter Collection, which is based on the immensely popular 1999 film. “For it, Lynh and I recreated a wearable version of Katrina’s magical black and white striped dress from the film, with much attention to detail, down to the lace detailing. We also created an original toile print featuring our take on several iconic images from the film, like the Hessian Skull, the Crone, the Iron Maiden and the jack-o’-lantern scarecrow, just to name a few. The collection infuses not only the Victorian aesthetics of Sleepy Hollow, but also a little 80s punk. And for our accessories, one of the stand-out pieces is our 3D replica of the jack-o’-lantern scarecrow head, which has been fashioned into a fully functional purse.”

As for the continued expansion of both La Femme en Noir and its sister company Vixen by Micheline Pitt (who recently announced a licensing deal with Paramount for Pet Sematary), Pitt offered of both apparel companies’ plans, “La Femme en Noir is excited to soon announce more properties in collaboration with the illustrious Paramount Pictures, with more film studios to soon follow. We are also thrilled to help change the landscape of what licensing looks like, with unique designs and collections that are fresh and exhilarating in the world of licensed apparel.”