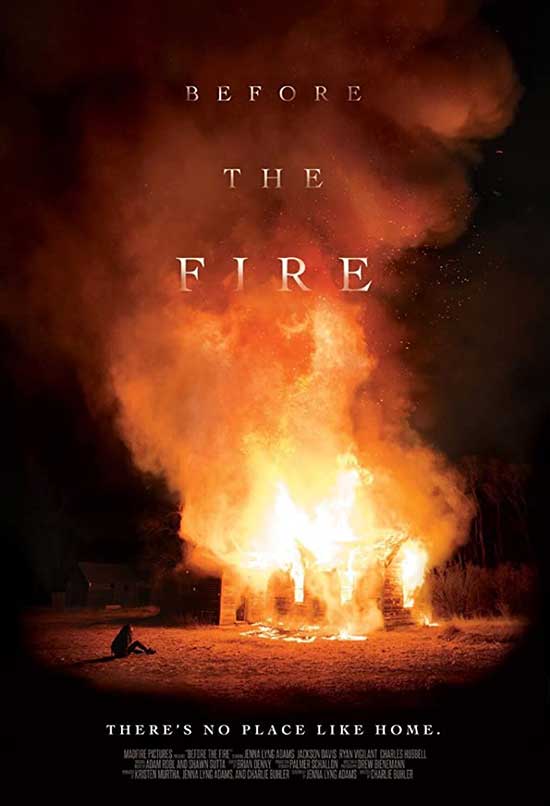 Dark Sky Films proudly announces the acquisition of the pandemic thriller BEFORE THE FIRE. Below you will find additional information about the film including the official trailer debut.

Before The Fire will be available in theaters and on digital later this summer. Stay tuned for additional information including release date and poster reveal.

Dark Sky Films today announced it has acquired all North American distribution rights to the timely new pandemic thriller BEFORE THE FIRE, the debut feature from director Charlie Buhler and written by and starring Jenna Lyng Adams of The Kominsky Method.
Nicola Goelzhaeuser, MPI/Dark Sky’s VP of Sales & Acquisitions, negotiated the deal for the Madfire Picturesproduction with John W. Bosher and Chris Charles of Throughline Films and Michelle Chang of Ramo Law on behalf of the filmmakers, including producer Kristen Murtha. Dark Sky plans to release the film in theaters and on digital platforms by mid-summer 2020.
BEFORE THE FIRE had its world premiere at the Cinequest Film Festival in March, immediately preceding the national lockdown in the U.S., which brought the film’s festival run to a halt. BEFORE THE FIRE received wide acclaim as a frightening and timely look at how individual lives are turned upside down by a global crisis and strikes an eerie resemblance to how we are living life today. The film follows Ava Boone (SAG Award nominee Jenna Lyng Adams), a Hollywood actress whose rising career is cut short when a pandemic influenza sends her back to the small town she fled years before, only to find something more dangerous than any virus waiting for her. Instead of shelter, her South Dakota hometown brings her face to face with unforeseen peril.
Adams, who is repped by Luber Roklin Entertainment and BRS/Gage Talent Agency, is joined in the cast by Jackson Davis (Vida, Palm Swings), Ryan Vigilant (Naked as We
Came) and Charles Hubbell. Director Charlie Buhler is repped by attorney Lev Ginsburg.
Buhler said, “We fought to make this movie because we felt that there was a very specific expectation about the types of stories women were able to tell. Jenna and I both love action and sci-fi, so we wanted to make a female protagonist that we women could really rally behind.”
Screenwriter and star Jenna Lyng Adams added, “Audiences are thirsty for unconventional, layered and imperfect women on-screen. Dark Sky Films has been known to support female driven films and we are happy to have found the right partnership for this movie.”
Among the raves BEFORE THE FIRE received upon its premiere, Liz Whittemore of the Alliance of Female Film Journalists said the film “is about trauma, family dynamics, fear, betrayal and power. It will pull you in from the very first moments and not let up until the credits.” “BEFORE THE FIRE couldn’t be more timely, giving audiences a chance to ponder who they want to be versus who they will be if things get worse,” said Fanboy Planet‘s Derek McCaw.
Dark Sky Films’ Nicola Goelzhaeuser said, “BEFORE THE FIRE arrives as the world is caught in an existential crisis, but it is really a timeless achievement that reveals how far people will go to survive. We look forward to bringing this female driven film to audiences everywhere.”
Share

Tags BEFORE THE FIRE