In “Buried Worlds with Don Wildman,” the iconic Travel Channel host takes his thirst for adventure into terrifying new territory to explore mankind’s darkest mysteries. In his newest series premiering on Travel Channel on Monday, June 8 at 9 p.m. ET/PT, Wildman is on a mission of a more cryptic sort, heading to remote regions of Peru, Haiti, Bulgaria and beyond – visiting the dark chasms and caverns of the paranormal and supernatural, tracking alleged lingering ghosts, devilish demons, vampires and witches burned at the stake. His global quest to explore the world’s most terrifying mysteries will consist of seven hour-long episodes and a two-hour special event finale airing on Monday, July 27 at 8 p.m. ET/PT. 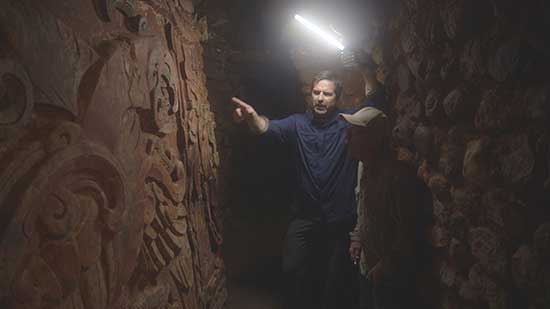 As he joins in taboo rituals, comes face-to-face with paranormal entities and witnesses deadly practices, Wildman is seeking out the darkest legends in the world and experiencing them for himself. His adventures take him to the Virginia woods for a harrowing encounter with demonic spirits and to Poland and Germany to hunt for powerful occult objects hidden by the Nazis. Later in the season, Wildman’s journey takes him to the coast of Peru – the site of the world’s largest mass human sacrifice, never revealed before on TV – and comes face-to-face with an ancient tribal god.

“’Buried Worlds’ is a quest that flips the switch on the paranormal and the supernatural, and sheds new light on the dark origin of legends and myths,” says Wildman.  “And I investigate those legends and myths first-hand, traveling to their sources in some very surprising places.”

In the premiere episode, Wildman begins his adventure by traveling to Eastern Europe to discover the truth behind the haunting stories of vampires that still linger and torment rural Bulgarian towns. He joins a group of active vampire hunters as they investigate an abandoned village terrorized by vampires and uncover what looks to be the tomb of one of them. He continues his journey by diving into the history of these beings, not only in Bulgaria, but in Hungary as well. As Wildman discovers the dark past of vampires and witches, he is given the opportunity to contact the spirits of those who have passed, with the help of a modern-day witch. To bring his adventure full circle, he explores the dark truth of the infamous Count Dracula.

Additional episodes inside the hidden horrors and deadly dangers of these unseen worlds include the following:

Wildman travels to Haiti to experience the mysterious power of voodoo. He gains access to a bloody sacrifice and learns the terrifying truth about zombies. Back in New Orleans, he witnesses a top-secret ritual as one man is possessed by the God of Death.

Wildman visits a Virginia town where paranormal activity is spiking and finds a connection to the lost Roanoke colony. Wildman retraces the path of a mysterious relic and explores whether dark magic brought to the New World could have doomed the settlers.

Traveling to Poland and Germany, Wildman gets access to a mysterious Nazi diary. Its dark clues take him to a perilous cave built to hide treasures and a crypt where Nazis held occult ceremonies. Wildman joins a witches’ ritual to see how Hitler tried to use black magic to conquer the world.

In Peru, Wildman investigates a deadly ancient cult by undergoing its most terrifying ritual. In remote caves, he finds evidence of a supernatural war. Finally, he uncovers clues about bloody sacrifice … and reveals the truth of this dangerous religion.

Wildman investigates dark cults in the Louisiana bayou. He finds evidence of rituals and joins an exorcism to ward off evil. Wildman learns from a witch that the land has dark powers. And he searches the swamps south of New Orleans looking for the mysterious orbs said to be the spirits of long-dead pirates forever doomed to guard their hidden treasure.

Wildman inspects a new find: ancient “witches marks” in an English cave. To explore ties to the supernatural, Wildman visits magical wells and dives the wreck of “the first Titanic.” He meets modern Druids to see if a bloody battle ended with a deadly curse.

Wildman undertakes the greatest challenge of his career – facing lethal dangers and deadly curses deep in the Honduran jungle on his quest to find the legendary Lost White City.