Debuts on Digital & Blu-ray™ May 5

Bonus Materials Include a “Making-of” Featurette 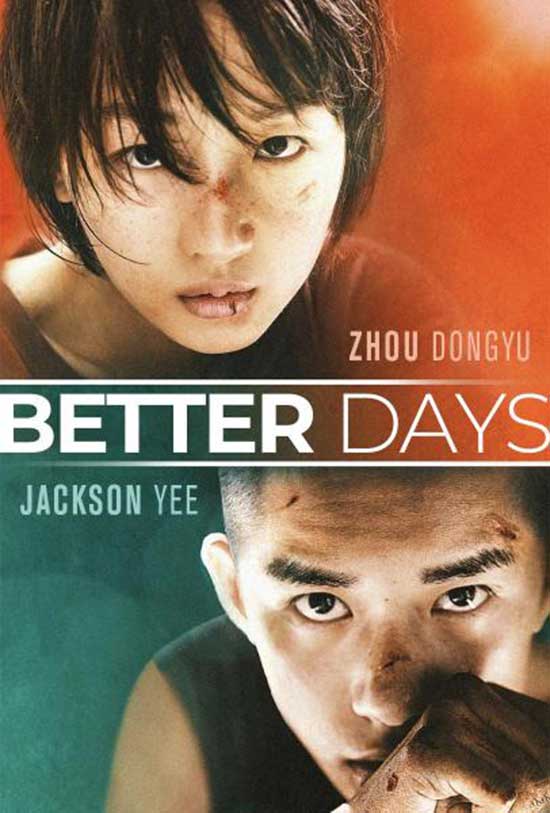 In the dramatic thriller BETTER DAYS, debuting on digital and Blu-ray May 5 from Well Go USA Entertainment, a bullied teenage girl forms an unlikely friendship with a mysterious young man who protects her from her assailants, all while she copes with the pressures of her final examinations.  Director Derek Kwok-Cheung Tsang (Soulmate) paints a bleak picture of an oppressive society, in the guise of a gripping fairy-tale love story, exposing the dark world of bullying and societal pressures of achievement facing today’s youth.  BETTER DAYS acclaimed cast includes Zhou Dongyu (Kung Fu Monster, The Thousand Faces of Dunjia, Soulmate) and C-pop superstar Jackson Yee (TFboys, GG Bond: Guarding). Bonus materials include a “making-of” featurette.

A favorite with critics and audiences alike, BETTER DAYS is currently rated 100% on Rotten Tomatoes’ Tomatometer, with an audience score of 97%.  In addition, the film won Best Picture, Best Director and Best Actress at the 2020 Hong Kong Directors Guild Awards, was named a “Film of Merit” and won Best Director at the 2020 Hong Kong Film Critics Society Awards and took home 2020 China Film Critics Association awards for Actress of the Year (Zhou Dongyu) and Best New Performer (Jackson Yee).

Nian finds her life at a standstill when facing relentless bullying from her peers as she prepares for her college entrance exam. Fate brings her together with small-time criminal Bei, but before they can retreat into a world of their own, both are dragged into the middle of a murder investigation that will change their lives forever.

BETTER DAYS is not yet rated and has a run time of approximately 135 minutes.