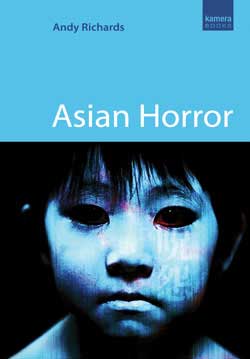 I’m always happy to find another book focused on the theme of Asian horror. Mainly because with each published offering, I learn a bit more about the underlying theme of Asian films. Asian horror has so many variations that surpass American styles of filmmaking, that the inventiveness is often mesmerizing at times. Then again, it can also be heavily redundant when a particular trend is in motion such as the wet haired girls films. Author Andy Richards gives us his interpretation of the “that was then and this is now” explanation on the social aspects and historical backgrounds that have influenced the filmmaking trends within Asian horror circles.

What I found most interesting was that several of these trends have been “named” and classified into styles of Asian horror. There of course is the J-horror trends, but it doesn’t stop there with other Asian sectors making their way into the genre. The book begins as most of this nature with a brief introduction into why those crazy Asians are the way they are and what motivates them into the conceptual realisms we have come to know. What is often pointed out, is that the early influences such as Kabuki, supernatural outlooks, and suffered culture all contribute in interesting ways. In other words, they have plenty levels of mental anguish and skewed pasts to summon the ideas of suffering into there work with much more ease than the western world. The Asians also have much different points of view on death, the afterlife and our relation to it, as Richards points out.

The book goes into sections that review and analyze some of the more well known titles to better communicate the trend movements. Earlier works start with giant monsters, ideas of hell, specters, ghosts and even attempts at mirroring are western vampire themes. Though it’s the later years where things get racy, controversial, scary and even more bizarre than a collection of David Lynch films rolled into one. As its called, trends begin to take form and assume certain names. “Ero-gro” combines eroticism and the grotesques producing some of the more distributing films in cinematic history. With this comes the themes of rape, torture, body mutilation and incestuous debauchery. This in fact started the CAT II trend which has become more known thru the recent yeas with a renewed interest in extreme horror experiences. V-cinema is a new term discussed that talks about the straight to video releases which nowadays is more of a norm than an exception. The themes of zombie based productions have come full circle based on the western attraction to the subject and the idea of cyberpunk seems to best captured thru the often tricky camera play approaches started by Asian filmmakers. Still more trends that are really not entirely defined yet can be seen in OTT titles like Machine Girl and “Tokyo Gore Police”.

I was surprised at how up to date this edition was naming some titles such a s Vampire girl vs Frankenstein girl which arrived on the scene only months ago. Further chapters take on more specifics of K-Horror and Thai terrors pointing out a few of the stand out titles to emerge. While its pretty common to run thru the most noted titles, what I appreciated more was the background inclusions that came with each. It gave more of a fact checking base that revealed more than just what the movie was about. The last chapter sort of culminates everything up to now really spending a chapter not only giving a closure but a sense of where eve thing as been a, is going and the current states of the industry. “Asian horror” is short and sweet with just enough content to get “right” the kind of information that readers of this genre would seek out. Great job!