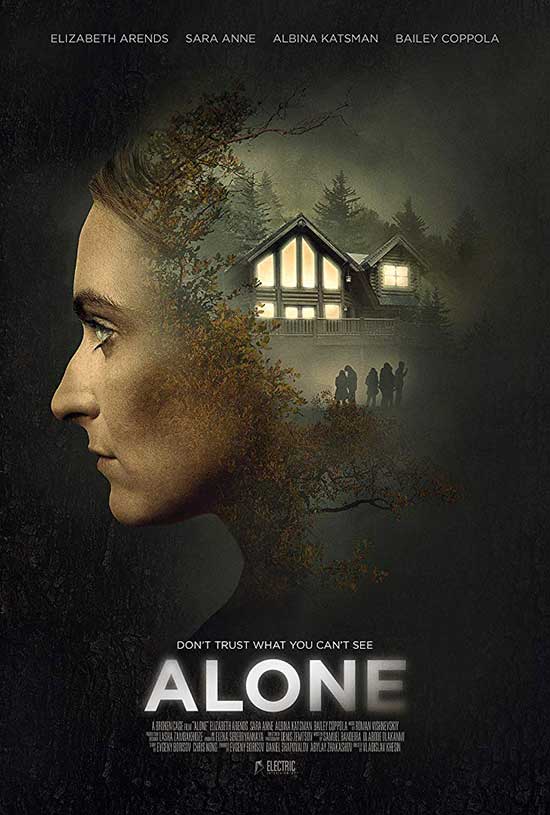 “Alone” follows a writer seeking peace and solitude in the countryside in an attempt to recover from tragedy and finish her book. However, as the welcoming country house turns into a living hell, she soon realizes that her inner demons are not the worst of her problems.

Emma is an Author who is going through writer’s block born of depression. At some point before, she lost her unborn child. Her psychiatrist recommends that she tries to get some peace and quiet. She has a kindly couple allow her to use their cabin for this purpose. While she is supposed to be alone, she starts hearing strange sounds and noticing that someone is moving her things. While the couple tries to reassure her that there is no one there, her paranoia starts to get to her. Then she is murdered twenty-four minutes into the film.

The movie starts with the police pulling up to a young girl screaming about her baby. Close to her is a guy with a bloody nose who the police have their guns trained on while he is telling them that he didn’t do it. It’s then we jump to Emma (Elizabeth Arends) on her way to the cabin. The weird jumps to this movie made me think that the young girl from the opening (who we later learn is named Hailey) and Emma were the same person. The connection feels like it was done on purpose. Emma isn’t actually introduced, rather her story begins with her going to her new home, so when she mentioned the lost baby it felt meaningful. This is problematic because there is no connection whatsoever.

Twenty-five minutes into Alone we are introduced to our new characters. Nice girl Hailey (Sarah Anne) and her brother Jesse (Bailey Coppola) are taking their friends Luke (Dane Majors) and Nicole (Albina Katsman) to their old family cabin. As one would expect, it’s the same cabin that author Emma was just murdered in. There isn’t a whole lot done to develop these characters. Final Girl Hailey is a nice girl who recently left her boyfriend and is secretly pregnant. The rest all fall under the same archetypes as most slashers. It’s then that we meet Nicole’s boyfriend Daniel (Kyle Dondlinger), who she secretly invited, and who brought Hailey’s ex-boyfriend Nate (Graham Jenkins)  with him. Daniel is a genuinely nice guy, and about the only likable character in the movie. Nate is a violent and abusive jackass. It doesn’t take long for the violence to start, and it looks like Nate is the main suspect.

Where can a person start with the problems that this movie presents? Rarely does a movie have two beginnings, it’s just regretful that it didn’t stick with the more interesting one. When the movie started with Emma, I was genuinely curious to see where this would go. A blind woman having to fend herself from an intruder sounded like an interesting movie, especially when it seemed that she had a past trauma.

She is then raped and killed so quickly that we don’t even get a chance to learn much about her. Emma was at least an interesting character. Her replacements are so cookie cutter and annoying that interest dwindled quickly. With the exceptions of the scenes with Hailey and Nicole, none of the other characters have any chemistry. It’s probably difficult when every character can be defined by a single word. The character of Nate in particular seems way out of place. He is a psychopath who responds to most situations with violence, so it seems questionable that he would be both the best friend and former boyfriend of the two nicest characters in the movie. When the movie tries to accuse him of murder, it is certainly believable.

The final nail in the coffin to the movie is the attempt at a twist. To the movie’s credit, it was certainly a surprise, it’s just that it didn’t make a whole lot of sense. Further exacerbating matters is how the twist was presented. Most movies that have a twist like this will maybe have a quick review montage to give the context behind the twist. Alone decides to replay twenty minutes of the movie. Not only do we get to see everyone die again, we get to see it with the information that we’ve already been given. 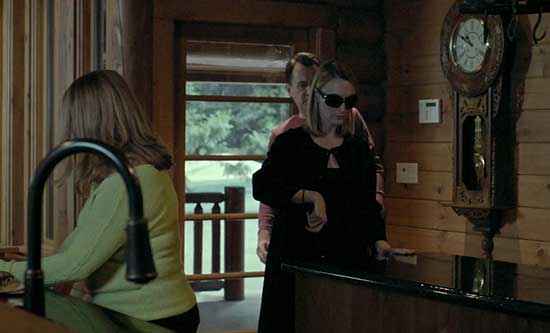 Alone is an odd movie, unfortunately one that isn’t very good. I can appreciate the attempt at a twist, but when the movie has to replay one fifth of its entirety to get the point across, it doesn’t exactly deserve praise. This is one that should probably be avoided.