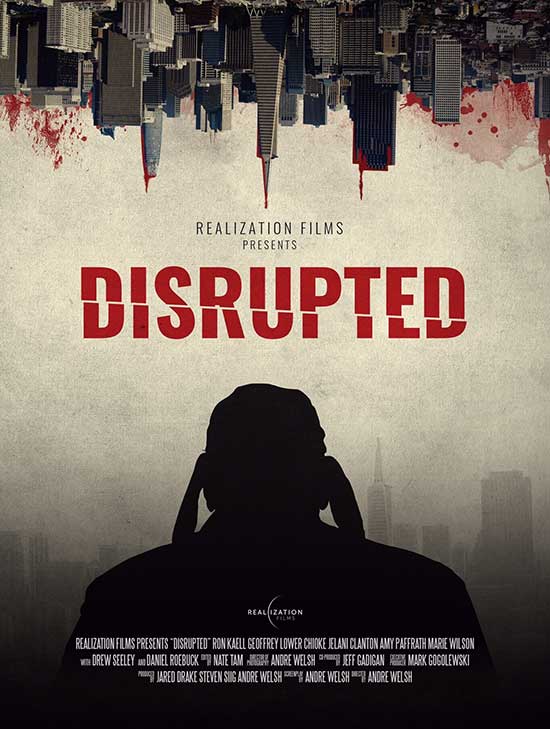 SUSPENSE THRILLER “DISRUPTED” BY REALIZATION FILMS TO BE RELEASED NATIONWIDE IN SUMMER 2020
The latest feature length film DISRUPTED, which is produced by Realization Films, will take over cinemas and online digital streaming services beginning in the Summer of 2020. Ron Kaell, together with Geoffrey Lower and Chioke Jelani Clanton are the lead actors of the movie.
DISRUPTED will be having it’s World Premiere as an Official Selection of the 2020 Cinequest Film & Creativity Festival occurring from Tuesday March 3 thru Sunday March 15, 2020. Voted as the Best Film Festival by USA Today readers, Cinequest is an international festival that celebrates the ingenuity of cinematic arts combined with Silicon Valley’s technologies & spirit of innovation to empower great creations.
The motion picture DISRUPTED is a singular journey about the weight of one’s past and the impossible challenge to do right by it in the present, bound into a tight-knit psychological suspense crime thriller that festers in the collateral damage of gentrification and race-related tensions rooted in modern day Oakland. The high-intensity film features dynamic visual storytelling, a tantalizing musical score, elements of intrigue, ambition, and power struggles, which make for a compelling picture.
Synopsis:
For longtime Oakland resident, Pete, survival is an endless struggle in a gentrified, tech-driven world that’s left him in its dust. But he’s clean and sober, has rectified a relationship with his daughter, and the memories of his wife’s unsolved murder from decades ago rarely haunt him these days. That is until a local killing is strikingly familiar. Reluctantly pulled back in by the retired detective who worked the original case, Pete again sets out to find his wife’s killer and is quickly consumed by his rekindled thirst for justice, a pursuit that cost him everything once before.
DISRUPTED also stars popular actors such as Marie Wilson, Drew Seeley, Amy Paffrath, and Daniel Roebuck. Producers are Mark Gogolewski, Steven Siig, and Jared Drake. Co-Producer is Jeff Gadigan, while Andre Welsh is the director. The screenplay is the work of Andre Welsh.
It is an honor for the DISRUPTED team to be able to showcase their cinematic artwork by having the World Premiere at the 2020 Cinequest Film & Creativity Festival. Make your plans now to be among the First Audience anywhere to see this film before its theatrical and digital streaming release later this year. For more information regarding the Cinequest program, schedule, as well as the passes and tickets for event screenings, visit www.Cinequest.org
For the latest updates, exclusive sneak peaks, giveaways and more, follow DISRUPTED on social media.