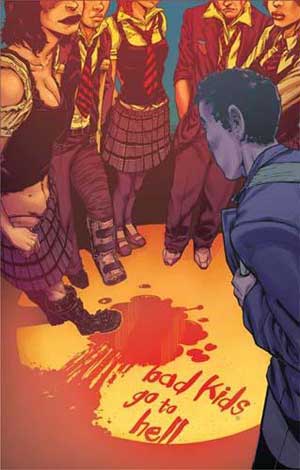 Go ahead, it’s ok to say it. How many folks started to instantly make comparisons to the film “Breakfast Club”. Maybe in spirit at least with a group of 6 teens being called into school on Sat to serve detention all with different character personas. Heck even the room they are locked into appears with an open sense of the library scene from the film. Where this differs is that it’s a modern telling with more extreme notions and characters.

We get a background on why some of them are here and in the process learn about the lives they lead and the local status their parents lead. What is different is that this is primarily a horror tale that involves a local Indian who was forced out of his home and land so that the school could keep building and expand. A library is erected and political strings are pulled to ultimately gain whatever needs are required. As we learn of the Indians suicide we also learn of his curse he put upon the place. Haunted some say, with jaded sprits, a controversial land surrender and a seque of some dark events that occurred in its initial building.

The group is Crestview’s batch of spoiled, sexy offspring who mix, match and bicker the whole time while revealing more of the character build. Sexy is an understatement as the females are hot, dirty minded and mix in a way that makes them even hotter. Megan gets sent to detention for a public strip show display she felt compelled to indulge on. The rest are there for various circumstances. Veronica is the token hot Goth witchcraft chick who gets to show off her knowledge a bit that doesn’t help matters. The place is noted for being haunted as they learn that the location is directly over an Indian burial ground. HMM didn’t they have that same problem in the film “Poltergeist”? Ya building anything over burial grounds is not good mix!

While its safe to assume that the story is built primarily on supernatural directions. the Scooby doo quickly falls away into a much more involved social drama that paints a picture of their circumstances and their parents influence on the community. Plots unravel, surprises emerge and alot of killing or accidental deaths rise to the surface. The script itself is smartly composed to pull the readers into the world of these teens. A looming threat of a wronged Indian also haunts the bunch to the point of fearing for their lives. By the time you reach the end, alot of your assumptions will be shattered in favor of where the writers WANT to take you. “Bad Kids go to Hell” is truly entertaining within these slick modern told pages.

Artwork is professionally done with bold thick lines and vivid color. Antarctic Press provides a impressive looking collection of the 4 “Bad Kids Go to Hell” comics under 1 well designed roof. Side Note: The TPB also features the cover artworks and a few of the layout sketches to check out. 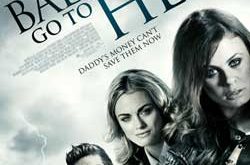