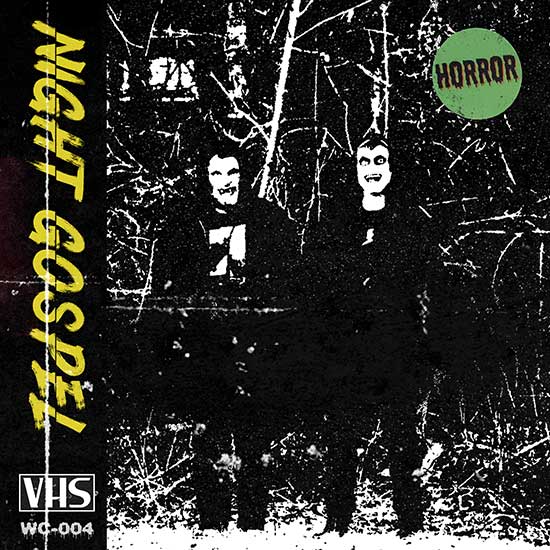 New Jersey-based Horror soundtrack/punk/synth obsessives, NIGHT GOSPEL, are set to release their debut self-titled EP on October 18th, just in time for Halloween. Today, October 4th, they have released the first single “Church of Hell” for your listening displeasure:
wetcassettes.bandcamp.com/album/night-gospel
Alongside a coming FREE digital release of the album via their label, Wet Cassettes, the duo also has planned a VHS- housed horror mixtape limited physical edition. In addition to the album’s four songs, the mixtape cassette has inter-spliced spooky sounds, audio recordings of REAL exorcisms and haunted objects, reminiscing old Halloween soundtrack tapes they loved as children. If that wasn’t enough, the VHS shell comes packed with an old-school horror comic lyric insert, printed by the band, as well as various trinkets, tricks, and treats.
Originally conceived as a vehicle to create mini-soundtracks for their own short films, over the last year, NIGHT GOSPEL have crafted these four tales of menace and grit in their own home studio. They have taken influence from adjacent genre greats such as John Carpenter, Goblin, Samhain and The Misfits, and combined them into their own unique sound. While the short films never came to be for this album, it is a concept that is being strongly considered for future releases.
With song titles such as “Escape from New Jersey,” “Church of Hell,” “Carnival Feast,” and “The Beast of Bayville: The Return,” the band has not only re-written some of their favorite moments from horror’s bloody history, but have also began to forge a path with their own dark sonic poems for ghouls to enjoy for many Octobers, and all of the months in between, to come.
www.instagram.com/wetcassettes/
Share