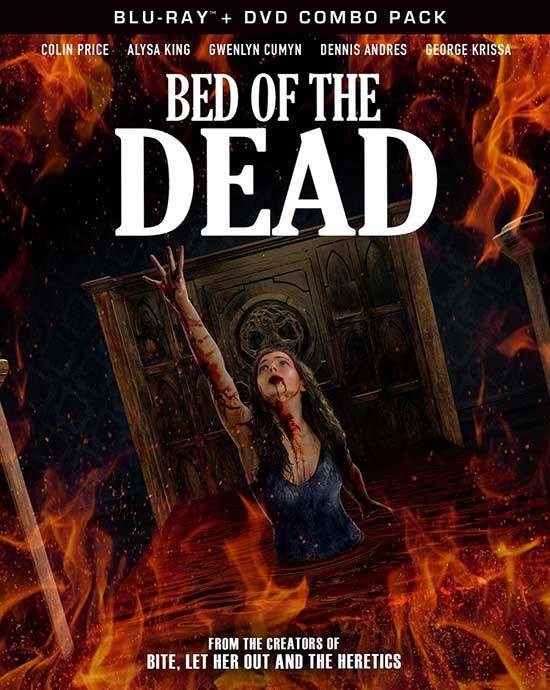 Black Fawn Distribution is pleased to announce the release of their newest title: the blood-soaked thriller Bed of the Dead. Produced by Black Fawn Films and Breakthrough Entertainment, Bed of the Dead is the directorial debut of Jeff Maher, whose cinematography can be seen in the majority of Black Fawn Films’ most recent releases including Bite, The Heretics and I’ll Take Your Dead. The film is available now on VOD platforms across Canada including iTunes and Black Fawn Distribution’s own Black Fawn

Bed of the Dead follows two young couples who visit the city’s oldest singles club for some late night fun. They soon find themselves stuck on a haunted antique bed where leaving leads to a bloody end. While plagued by frightening hallucinations, the group must figure out the bed’s secrets before they’re gruesomely picked off one by one. You made your bed, now die in it!

Expanding on the haunted furniture sub-genre, Bed of the Dead will receive the Black Fawn Distribution collector’s edition treatment with a physical release slated for Tuesday, June 18, 2019. The collector’s edition will be presented as a 2 disc Blu-ray/DVD combo pack and will feature an exclusive slipcase, a documentary on the making of Death Bed: The Bed that Eats (the 70s cult classic and the only other film to feature a killer bed), a music box player featuring previously unreleased songs from composer Steph Copeland, and more.

“Bed of the Dead has seen a long journey from its conception to its release but, we couldn’t be more proud to have finally fully acquired this title,” states Black Fawn Distribution’s Operations Manager Chris Benn. “Horror fans have waited long enough for this film to be released and we wanted to get it into their hands as quickly as possible. It’s simply a great addition to any collection.”

“It took a few years but, finally this weird little flick we made is available for your viewing pleasure,” states director Jeff Maher. “Horror fans should enjoy the buckets of blood as much as the cast disliked being covered in them.”

Filmed in Hamilton, Ontario, Bed of the Dead sold out its world premiere at Fantasia International Film Festival (Canada) going on to screen at such film festivals as Sitges (Spain), Fright Fest (England), Berlin Fantasy Fest (Germany), Toronto After Dark (Canada) and Other World’s Film Festival (USA). The film is the directorial debut of Jeff Maher (Director of Photography for The Heretics, Let Her Out, Bite) and stars Colin Price (The Heretics, Murdoch Mysteries), Alyssa King (Slasher, Berkshire County), Gwenlyn Cumyn (Barbelle, Chasing Valentine), Dennis Andres (TV’s Workin’ Moms, Killjoys) and George Krissa (Blood and Fury). The film features another hauntingly beautiful score by Steph Copeland (The Heretics, Let Her Out, The Drownsman) and was produced by Cody Calahan, Chad Archibald, Christopher Giroux and Jeff Maher.

“This is our fifth special edition Blu-ray that we’ve released under the Black Fawn Distribution banner,” explains General Manager Chad Archibald. “Jeff Maher shot a gorgeously dark film and Bed of the Dead deserves to be seen in the best quality possible. This is also the only version of the film that will have these special features attached to it so, it’s a must have for horror collectors.” The Blu-ray/DVD will be available on its own or as part of a limited edition “Blacklist” package which will feature a signed copy of the film and a variety of exclusive collectibles. Pre-orders for the film can be placed through the following link: www.blackfawndistribution.com/store

Synopsis
Four twenty-somethings find themselves stuck on a haunted antique bed where leaving means suffering a gruesome death. Plagued with frightening hallucinations, they must figure out the bed’s secrets before they are gruesomely picked off one by one.