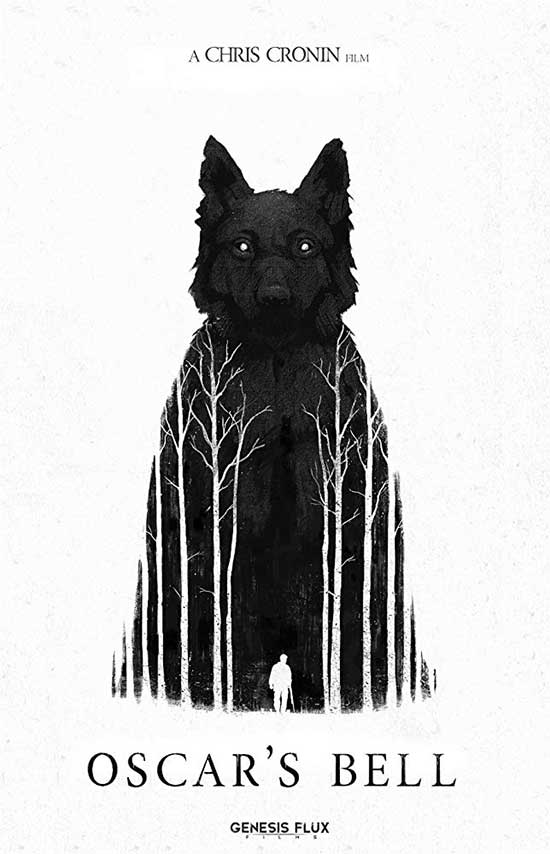 Duncan and his dog Oscar have gone on their weekly camping trip into the wilderness together. However, when Duncan looks out into the woods, something else looks back.

Oscar’s Bell is a visual delight and suspenseful until the last moment. A divorced father Duncan played by Paul Bullion takes his son and pet on a camping trip in the secluded wilderness. The film was Directed by Chris Cronin and his award winning team Genesis Flux. Genesis Flux makes a quality production and offers films such as Sophie’s Fortune and Balcony. Our cast isolated surrounded by the wilderness and the unknown is classic horror. The wilderness has fueled fear of humans since the beginning of time. Millions of minds have wondered what lies beyond the shadows.

The suspense starts out as Oscar the family pet a German Shephard seems to hear something in the wood and goes to investigate. The dog has a bell on his collar that jingles with ever step he takes. The suspense ramps up as the father awakens from the comfort of his camp fire to the noise of something unknown in the woods and the dogs collar bell.  The noises seem innocent enough at first but get weirder and more sporadic with the moving sound of Oscars bell. The music and scene intensifies as it develops. The music and score intensifies as the panic in our main character sets in. He hears the dog and it seems injured. He investigates and the dog comes back and seems to be scared and hides under his vehicle. Noises in the woods and animal sounds seem to keep our main character on edge. Duncan goes to investigate and looks back to see his sleeping soon. Being on the safe side he puts his son in the vehicle and forces the dog in the vehicle to further investigate after retrieving his gun from the vehicle.

It wouldn’t do the film any justice if I gave more of the plot line or story out. The rest of the films is the stuff urban legends are made of. Oscar’s bell is a high quality film that deserves respect from horror and suspense fans everywhere. I would love to see this film in a theatre environmental. I hope to see more from this team and Chris Cronin fabulous job on every aspect, great talent for building environment and suspense.