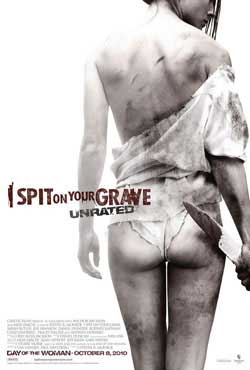 A woman who is brutally raped during a cabin retreat seeks retribution against her attackers who left her for dead.

You know, back in 1978 when I was just a Black Saint in training i took in a movie with a bunch of my acolytes (yes I had them way back then as well). It was originally called “Day Of The Woman” but apparently wasn’t making a lot of money under that title so the distributor at the time changed the title into something a little more marketable. They changed the title to “I Spit On Your Grave”. That was a brilliant move on their part. With that title & a provocative poster image of a woman with her back facing the viewer in tattered clothing scarred & Bruised and most importantly holding a knife…by it’s blade. They had themselves a winning campaign. But was it a good movie?
I can tell you that all of us were sufficiently excited to be entering the bijou even though we really had no idea what the movie was about. Well we soon found out that it told the tale of a woman (Camile Keaton, Buster’s granddaughter)! who rents a secluded cabin in the woods to work on a book she’s trying to write. She figures the seclusion is what she needs to get her creative juices flowing. Unfortunately, She gets noticed by the neighborhood rednecks & they in time enter her cabin & rape her…repeatedly. Now I have to admit that being the youngsters that we were we were actually titillated at the actions taking place on the screen. It’s not that we were pro rape, far from it. But it was fairly graphic sex taking place on the big screen & at that tender age we were for lack of a better word….excited.
Now let me make something completely clear to everyone reading this before you all get your panties in a bunch, Rape is a detestable action, whether it be man on woman, man on man or any other combination your sick little minds can think of. The film doesn’t glorify rape but I’ll be damned if it didn’t spend a lot of it’s running time on it rape scenes. I said scenes because Ms. Keaton is raped repeatedly by 4 men inside & outside of her cabin. It’s been awhile since I’ve seen the original but I do remember the rape scenes going on seemingly forever. I still wonder to this day how it must’ve felt filming those scenes both for Ms. Keaton & the 4 actors who performed those heinous & sexually explicit scenes. To this day they are very disturbing & a tribute to director Meir Zarchi’s skill in choreographing what had to be very unsettling set pieces for all involved.
Of course, in the end she gets her revenge on all of them & the score is settled. These scenes were very graphic as well but she comes out on top & kills her attackers. All is well…or is it? We never do find out. All the film gives us in the end is a woman who finds the inner strength to fight back & avenge herself but we never get a sense of what her life will be like afterwards. Can she live a normal life again? Could she have a healtthy sexual relationship with anyone, man or woman, again? We never find out & this I find to be the flaw in the film. But then again I don’t think Zarchi had that in mind. He wanted to make a movie about an ncomfortable subject with no gloves on & he did. The film was a success financially if not critically.
Here we are now 32 years later & director Steven R. Monroe working with the original Zarchi script with some input from screenwriter Stuart Morse & production company “Family Of The Year productions(!) have remade the movie & on top of that are planning to release it unrated. It takes guts to release any movie unrated nowadays. No newspaper will accept ad’s for it. I don’t think many theatres will screen it at all. So I believe that they’re hoping that the original films repuation & word of mouth will get them some decent box office.
The film is basically the same as the original except for a couple of extra characters, one of whom is a sheriff who gets in on the rape. The film opens with our heroine/victim (I really don’t know how to describe her since she’s basically both) driving to the cabin. As she’s driving the title of the movie appears on the screen. No “Starring” credits…actually no credits at all. Just the title. her name is Jennifer & she is played by a very brave actress by the name of Sarah Butler who is not only a stunning woman but a very good actress at well. I wish the Academy Of Motion Picture Arts & sciences would pay atttention to films like this to see a performance like hers. She is amazing & really gives it her all.
Jennifer stops for gas & directions at the local gas station where the local rednecks it around & do basically nothing but spit, pump gas & eat junk food. One of them, Johnny (Jeff Branson) makes a play for her & she laughs it off but unintentionally knocks him over spilling windshield wiper fluid over him much to the delight of his cohorts. She apologizes profusely & eventually leaves to her destination. Once there she unpacks a whole lot of wine & gets settled into her new abode for the next few months. 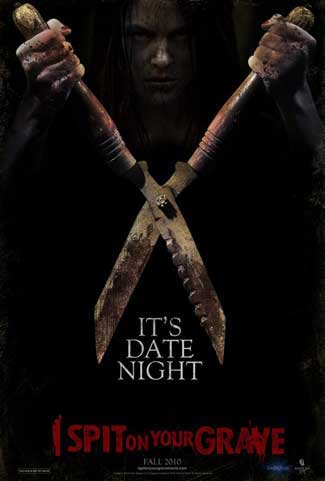