“Bizarre, gore-soaked, and thoughtful… one of the most unique and enjoyable festivals around today.”

The Philadelphia Unnamed Film Festival is once again ready to unleash the finest independent genre cinema upon the City of Brotherly Love. Returning to the Proscenium Theater at the Drake in Center City Philadelphia from Wednesday, September 5 to Sunday, September 9, PUFF is back for its third annual edition, with an extended feature program, special presentations, and much more.

In the 2018 edition of the Philadelphia Unnamed Film Festival,  genre fans will have the opportunity to check out eleven feature films — the biggest lineup in PUFF history — as well as four short film programs. Additionally, PUFF will kick-off with a Wednesday night Pre-PUFF event, showcasing a special exhibition of the John Waters’ Hairspray, to celebrate the 30th anniversary of the film, as well as a Horror Shorts program screening exclusively at South Street Cinema.

Bringing titles that have played Fantasia, Tribeca and Slamdance to Philly, PUFF 2018 has something for everyone, from Joko Anwar’s bone-chilling Satan’s Slaves to Mitzi Peirone’s surreal fairytale Braid. The festival also includes ghost stories and supernatural scares with The Witch In The Window and Luciferina, mind bending thrillers like The God Inside My Ear and Butterfly Kisses, and stylized action films such as Buybust and Rock Steady Row. Offering an eclectic mix of horror, action, crime and comedy, PUFF 2018’s program is guaranteed to please even the most hard-pressed genre fan.

The exciting, new elements for PUFF3 come hand-in-hand with much of what has made PUFF successful in the past. Returning for 2018 is the second annual Legacy Award Ceremony, honoring Philadelphia’s own Joe Augustyn, who wrote and produced the cult classic Night of the Demons. PUFF celebrates homegrown films in the Local Shorts Program, with a spotlight on regional cinematic storytellers, and much more. Furthermore, PUFF 2018 welcomes a cavalcade of filmmakers and special guests, including cult  musician Weird Paul Petroskey, who will be performing a live set following the screening of the documentary Will Work For Views on opening night.

Badges for PUFF 2018 as well as individual tickets for all programmed films can be purchased via Film Freeway HERE. For more information, including our schedule and feature film trailers, please visit the official Philadelphia Unnamed Film Festival website HERE. You can also get exclusive updates and previews for PUFF 2018 via the festival’s Facebook and Twitter, and see our full line-up below.

Presented in conjunction with Cinema Ray, Pre-PUFF ushers in the fest in style with a 30th Anniversary exhibition of John Waters’ 1988 comedy classic Hairspray. Starring Divine in one of her final film roles as the iconic Edna Turnblad, this socially-relevant cult sensation will be followed by a conversation with Dreamlander Elizabeth Coffey, who also starred in Pink Flamingos and Female Trouble. WXPN host Robert Drake will moderate the event.

Prior to our opening night selections, PUFF is proud to bestow our second annual Legacy Award to Philadelphia native Joe Augustyn, the writer and producer of the cult classic horror film Night of the Demons. A graduate of Temple University, Augustyn is most notable for his works in genre cinema, which further includes Night Angel, starring Karen Black, Doug Jones, Helen Martin and Linden Ashby, and Night of the Demons 2, as well as his advocacy for paranormal research. Most recently, Joe Augustyn has launched a career as an author, garnering acclaim for his debut horror novel, “The Nine Lives of Felicia Miller,” in 2012.

The film follows a downtrodden family grieving the loss of their matriarch, who was mysteriously ill for years. But after a string of chilling supernatural occurrences, the family begins to suspect that their mother may have unfinished business that spells doom for them all. Satan’s Slaves is the terrifying latest cinematic offering from noted international genre provocateur Joko Anwar.

Followed by Filmmaker Q&A and a Live Performance from Weird Paul Petroskey!

Before there were “influencers” and “YouTube stars,” there was Weird Paul. The self-described original vlogger, Weird Paul first began recording entertaining, DIY videos and music at age 13 in the hopes of making a career out of his art. 30 years later, Weird Paul has produced thousands of videos and over 160 songs… and doesn’t show any sign of slowing down, despite the obstacles life throws in his way.

A clever and defiantly feminine vision from filmmaker Mitzi Peirone, Braid follows two desperate thieves who arrive at the doorstep of an estranged childhood friend’s mansion. However, their plan to rob their former acquaintance of her riches goes awry, and they discover that she lives in a dangerous and vibrant world of her own creation. A sophisticated mix between Funny Games and Alice in Wonderland, the first film ever entirely produced with cryptocurrency, Braid is a thrilling and surreal nightmare that puts the “gore” in gorgeous.

PUFF’s yearly search for the most unusual in short-form cinema culminates in the Bizarre Block. This year, we highlight a pair of outrageous and avant garde films that aim to break your brain and shock your system.

Director Brett Glassberg throws caution to the wind in this morally bankrupt tale of a Thanksgiving gone very, very wrong, offering surreal visuals, frantic performances, shocking gore and a metric ton of “F*** You” energy. Yet the real brilliance of the Derelicts may be the twisted turns that the film puts on display, leading to a horrifying finale that will leave you running home to take a shower.

A young woman goes through a sudden change when her boyfriend leaves her to join a cult. An atmospheric, DIY thriller that is quirky, contemplative, and chilling in equal measure, this mind-bending descent into conspiracy and fantasy marks an impressive directorial debut from Joe Badon. Punctuated with dropping visuals from cinematographer Daniel Waghorne, The God Inside My Ear is a unique oddity that flips the script at every corner.

Stylish, engaging and brimming with nostalgia, Yojimbo meets Turbo Kid in this kick-ass Slamdance winner. Rock Steady Row follows a newly enrolled college student, who arrives to campus to find destitution, fear, and warring fraternities who trade in stolen bicycles. When his prized bike is stolen by the baddest kid on campus, this freshman finds himself fighting, stealing, and conning the various eccentric students to retrieve his ride.

PUFF has once again aggregated the most fantastic short-form films from around the globe with our International Oddities Block. With a focus on the most strange and singular voices on the film festival landscape today, these bite-sized gems give a glimpse into the future of independent filmmaking. Furthermore, PUFF is excited to welcome back our International Oddities Block MVP, Logan Fry, with his latest film, Ro-boob: The Farting Robot Monster.

We Go On co-director Andy Mitton returns to PUFF with his latest feature, The Witch in the Window, which tells the tale of a father and son whose summer retreat takes a terrifying turn when they learn a local legend is more than just lore. However, Mitton’s penchant for telling horror stories that are emotionally grounded as they are eerie shines again in The Witch in the Window, especially as he spotlights a pair of phenomenal performances from Alex Draper and Charlie Tacker.

Explosive, pulse-pounding and ultraviolent, BuyBust is yet another incredible credit for acclaimed Filipino action filmmaker Erik Matti. Anchored by a hard-hitting performance from Filipino pop star Anne Curtis, BuyBust follows an anti-drug enforcement agency whose massive drug bust goes terribly wrong, leaving the officers fighting for their lives in the slums of Manila. Unnervingly intense, BuyBust pulls no punches and opens a brutal new chapter in the storied legacy of Asian action cinema.

PUFF is bringing a murderer’s row of scary short films to South Street Cinema, presenting a plethora of macabre masterworks in a very special Saturday Night presentation. From psychological terrors to disturbing gorefests, including the latest from Death Metal filmmaker Chris McInroy, PUFF’s horror block welcomes the horrorhounds of Philly to get their fright fix for only $5.00! [Note: Festival Badges will be honored by South Street Cinema]

An immersive and creepy horror offering that blurs the lines between fact and fiction, Butterfly Kisses revives the found footage genre with a fresh and frightening tale of obsession. The film follows a mysterious student film that is discovered by a struggling documentarian who vows to find out the truth behind the disturbing flick. However, as he goes deeper and deeper into the ghoulish horrors at the heart of the footage, his loosening grip on reality puts every revelation into question.

A bloody and hypnotic twist on ‘70s-style crime film, The Queen of Hollywood Blvd is a revenge tale that breaks every rule in the book while delivering something unforgettable. Showcasing a tour-de-force titular performance from the director’s own mother, Rosemary Hochschild, Orson Oblowitz’s feature debut follows a 60-year-old strip club owner who is confronted by the mob, setting off a destructive and deadly domino effect set against a neon-soaked Los Angeles background. Notably featuring the final film performance of acting legend Michael Parks (Kill Bill, Tusk), The Queen of Hollywood Blvd is portrayal of pride and payback through a rare perspective.

The latest film from Argentinian shock master Gonzalo Calzada, Luciferina is a provocative and visually explosive film in which religion, innocence, and evil spectacularly collide. Natalia is a 19-year-old nun who reluctantly returns home to say goodbye to her dying father. Upon reuniting with her sister, she finds herself accompanying her into the jungle in search of a life-altering drug experience. Yet, instead of pleasure, they find a world of demonic darkness. Gory, sexy, and strange, our closing night film is brought to PUFF by Philadelphian distributor Artsploitation, and ends the third annual festival in a crazed fury of satanic madness!

All events at The Proscenium Theatre at The Drake (302 South Hicks Street) except the Saturday Night Horror Shorts at South Street Cinema (327 South Street).

Tickets for All Screenings (Unless Specified Above): $10.00

Festival Badges (Valid for Every Screening/Event Unless Specified Above): $50.00

Available online at www.unnamedfilmfestival.com or at the box office 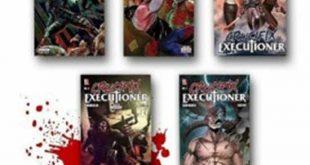 The Crucifix Executioner: Most Killer Kickstarter is now Live!!

TALES OF THE UNCANNY, plus the ultra-rare features EERIE TALES & HISTORIES EXTRAORDINAIRE.