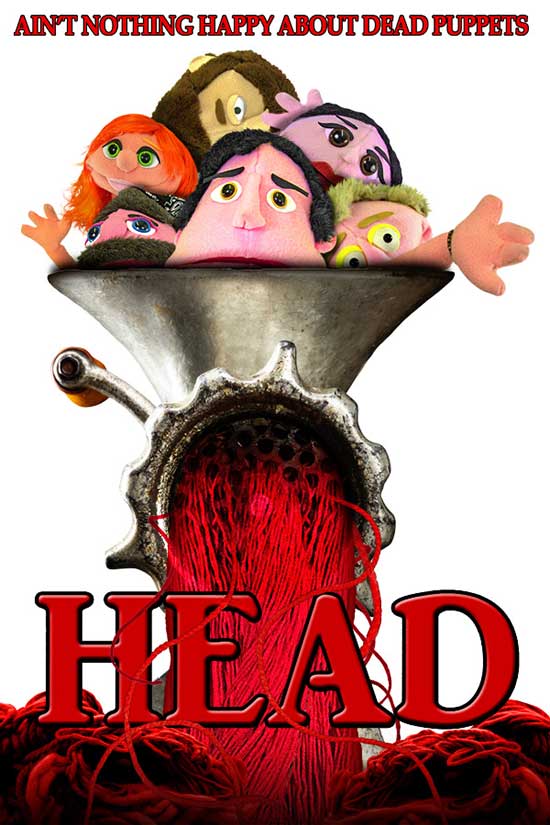 TERROR FILMS has managed to bring horror fans everything under the sun. Ghosts, demons, killers and creatures of all shapes and sizes have been shown by this distributor. Their newest acquisition is set for release on Friday the 13th (July 13th, 2018). This genre distributor will bring you the most risquee in puppet horror, Jon Bristol’s HEAD!

HEAD is everything you could want and more in a horror film. It’s an ode to 80’s horror flicks about a group of twenty-somethings on a camping trip. There are hot chicks, sex in tents, a serial killer chopping off heads and victims tied up in trees. What more could you ask for? Oh yeah – all of the characters are puppets!

Unlike the soon to be released Happy Time Murders, there are no signs of humans in HEAD, only puppets. Walking, talking, sex having, shit talking puppets – one by one, they are being murdered by a crazed killer. And as the tag line in the official poster and trailer for HEAD proclaims – “Ain’t Nothing Happy About Dead Puppets.”

This title was developed by a creative team of filmmakers. The film was directed by Jon Bristol, who also penned the script with J.R. Calvo and Brian Woodman. As well, the film was produced by Rick Passmore. And, the film features the voice talents of: Bristol, Manda Vasas, Nick Foreman, Mike Finland, Sally Arlette Garcia and Ben Farley.  Chris Gierowski executive produced this feature.

Terror Films will launch the film on several Digital platforms. Platforms hosting the film’s launch include: Amazon Prime, iTunes, VUDU and Tubi TV. The release will be available  in North America, as well as over 40 english speaking countries. Additional Digital platforms will follow, along with a DVD release, at a later date.

In the meantime, readers can check out the official trailer and poster for HEAD, along with a few fun stills here!