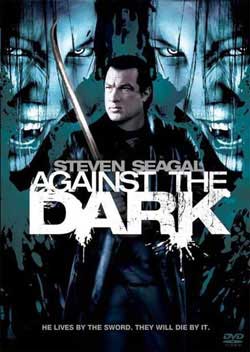 Katana master Tao (Steven Seagal) leads a special ops squad of ex-military vigilantes on a massacre mission, their target: vampires. On the post apocalyptic globe, sucked dry by bloodthirsty vampires, a few remaining survivors are trapped in an infected hospital. Tao is their only hope and he knows the only cure is execution. Now it’s time for the last stand against the flesh-eating vampires and there’s nothing left to lose but the last of humanity.

The future of mankind has brought on an outbreak. This outbreak is a lethal virus that effects the hosts and turns them into blood sucking savages. The savages which resemble vampires feed on human flesh, attack with maniacal intentions and rip humans to shreds without a second thought. In other words, insane mutant killing machines. As this outbreak has increased and caused chaos, the remaining survivors consist of those who seek shelter and food and those who have joined together to fight these things which call themselves “Hunters”. “Hunters” travel in groups wielding sword and custom knives to do battle against these creatures. Our story takes place in a recent viral outbreak where a vigilante team headed by Katana master Tao (Steven Seagal) and his group of special ops warriors seeks out survivors and takes out as many of these creatures as they can, mostly with the quick slice of a blade.

Our other group is a group of survivors who sought refuge in a local building for shelter and food and find themselves working there way down to freedom. The infected tend to rest during the day and seek food at night. To add to the tension, a military operation is preparing to exterminate the entire area so they don’t work there way out to infect others. The groups have to clear the area before dawn.

I’ve always held Segal as a favorite action hero of mine. Movies like “Hard to Kill” & “Above the Law” were great films in there time and then somewhere along the way the thrill of Segal got lost in one to many releases that didn’t hold up. Fast forward to 2009 and we have Segal playing his best “Blade” impersonation as he uses his skills in swordplay and few kicks for food measures. Against the Dark is not a bad film, though it tends to get lethargic at times. Most of our scenery is confined to this building and like a video game around every corner is another blood sucking creep to do battle against. Beyond that premise we doesn’t get a whole lot of story to go off of. There’s plenty of gore, gory flash backs and chopping, slicing eating scenes but even that gets old as it seems to be the norm with every room they encounter.

The band of survivors struggle with finding there way to the “security door” as its mentioned while trying not to get eaten or infected along the way. The problem is, the creatures are evolving so they are slowly becoming rational enough to fool the survivors. This is not a good thing as the survivors try and grab whoever they can along the way to join them.

The battles are fought pretty decent as Segal is a master if this kind of cinema fair. Though I think he’s mostly unplayed and not given a chance to really shine. Which is shame as I would like to have seem more from him. The lines given are far and few between but also when spoken are classic Segal. Lines such as “I’m the one who’s gonna do you like you’ve been doing everybody else” is alot of fun and gives you a glimpse of the Segal we came to love even though his style of speaking is more like something you would use to seduce a woman. I do hope that Segel continues o this path as I think he could make a a great hero/ warrior role in other films. Though hopefully they will pump up the action and the character development. On other accounts director Richard Crudo does the best as he can with an obvious limited budget. The creature vampires are pretty nasty and live up to what we expect from them. The film was pretty dark lit, so often many of these scenes were a struggle to see though a mostly night shot film.

Overall I did enjoy alot of it, but as mentioned before after the first half I was ready to see something new which never really materialized. This aspect tends to drag a plot as we know by this point into he film the objective, how its gonna end and what surprises we assume they’ll try and though at us. Essentially its an escape film from a hospital that requires going down the hallways of each floor rather than quick exit down a flight of stairs. Not bad, nothing new but Segal as vampire killer is new and something I hope to see more of in the future.

Tags Against The Dark Steven Seagal 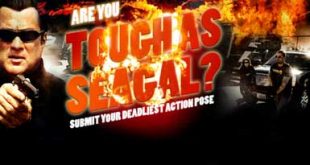 Steven Seagal Photo Contest: Are You As Tough As Seagal?