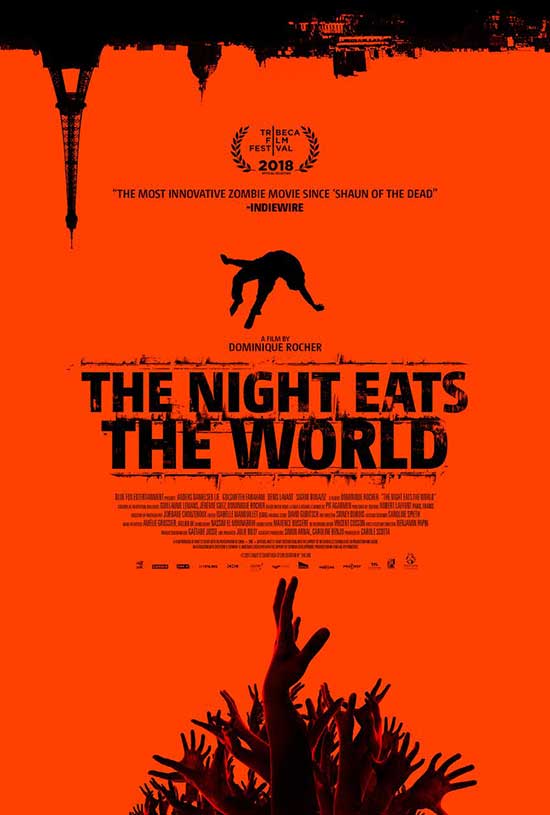 Blue Fox Entertainment is proud to debut the new Official US Poster and release details for Dominique Rocher’s innovative new take at zombie cinema, THE NIGHT EATS THE WORLD, opening in theaters and on VOD July 13th.  The Tribeca premiering French production was actually shot in both French and English (French take, then English take…) – (Tribeca and other festivals screened the French version with English subtitles, Blue Fox Entertainment will be releasing the English language version which has yet to be screened in public.)

Great Norwegian actor Anders Danielsen (PERSONAL SHOPPER, OSLO, AUGUST 31st) gives an amazing performance as Sam, who wakes up in his apartment after a wild night of partying to find out zombies have invaded the streets of Paris and he appears to be the lone survivor.  Ward-winners Golshifteh Farahani (THE PATIENCE STONE, ABOUT ELLY) and Denis Lavant  (HOLY MOTORS, BOY MEETS GIRL) co-star.

After waking up in an apartment the night after a raging party, Sam comes face to face with his new reality: an army of zombies have invaded the streets of Paris and he is one of the lone survivors. Petrified with fear, he barricades himself inside the building to survive. He wonders how long can he last in silence and solitude, and the answer comes when he learns that he’s not all alone after all.

Tags THE NIGHT EATS THE WORLD