From Legendary Studio EUROCINE Comes OASIS OF THE LOST GIRLS!

An obscure ’70s exploitation film from Eurocine and Full Moon

From the annals of legendary French Erotica studio Eurocine’s sex-soaked vaults comes Oasis of the Lost Girls (aka Police Destination Oasis), a sleazy wallow in sadism, torture and intrigue that only Eurocine could have made!

Freewheeling female friends Annie (Living Dead Girl’s Francoise Blanchard) and Nadine (Caged Women’s Nadine Pascal) are snatched during a night of rump-shaking discotheque shenanigans by an evil slavery ring. Drugged and gagged, the gals wake up in the “Oasis”, a clandestine bordello nestled deep in the African Congo where they – and a gaggle of girl prisoners from all over the world – are subjected to untold torments. Their miseries are overseen by the sadistic “warden”, Madame Gaby (Shirley Knight, White Cannibal Queen), a ruthless fiend who foils the girls’ attempts at escape at every turn. 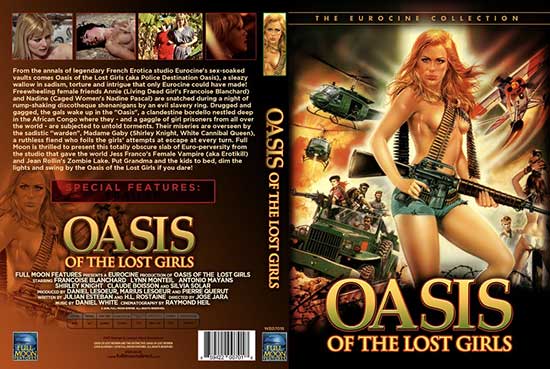 Full Moon is thrilled to present this totally obscure slab of Euro-perversity from the studio that gave the world Jess Franco’s Female Vampire (aka Erotikill) and Jean Rollin’s Zombie Lake.It was after all, Full Moon founder Charles Band’s now iconic Wizard Video VHS and home video imprint that brought many of Eurocine’s most famous films to North American video store shelves in the 1980s. It just makes sense for us to do it again with many of the RAREST titles in the Eurocine library.

Put Grandma and the kids to bed, dim the lights and swing by the Oasis of the Lost Girls if you dare!