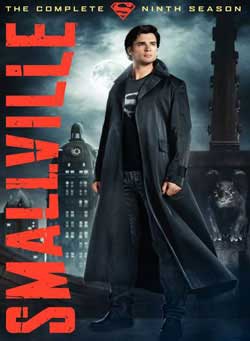 After a meteor shower bursts from the heavens, raining destruction on the unsuspecting citizens of Smallville, years pass, and the healing process leaves the town’s inhabitants with scars and secrets. From the ashes of tragedy, a popular yet awkward teen attempts to decipher the meaning of his life and his clouded past. As he struggles with the transition from boyhood to adulthood, Clark finds that his strength and strange abilities set him uncomfortably apart from his peers. Soaring into its ninth season, this modern retelling of the Superman legend and its classic characters continues to blend realism, action and emotional depth to reveal a new interpretation of the enduring mythology. This season, as Metropolis’s clock tower tolls our characters’ darkest hour, we find Clark Kent (series star TOM WELLING) finally making his first attempts to embrace his calling as a superhero.

The Smallville universe was not that small with this marking the 9th season of the hit TV show. While I’ve acknowlede the fact that the show has great things about it, I confess to this being my first season to really sit down and watch. Why? I’ve never been a huge Super man fan, but have been a huge “superhero” fan. As the show announced progressions, I got wind of the appearance of more villains, more heroes and of course the ragtag team of the Justice League of America. So I would wait patiently for more hero announcements to plan my viewing sessions carefully.

Well season 9 features one superhero team that was too much of a guilty pleasure to pass up….The Justice Society of America. For comic book fans on the old age of heroes, word of Dr. Fate, Hawkman and a few others was a moment in waiting. But I’m probably getting ahead of the story here. Superman who everyone refers to as the  “blur” is determined to focus more on saving than delving in mortal ways. He had momentarily lost his powers of flight an has been in training with Jorel. He also seems somewhat determined to leave his superman logo as a personal sign of accomplishment with each new crime stopping event. Now, I cant really comment on all the events leading up to season 9, but I can give my interpretation of where things are now.

Clark Kent has been on somewhat of a sabatical. Apparently folks coming and going at the daily planet is common place from what I can tell. Lois Lane is infatuated with “the blur” and rightly so as she has been given exclusives to some of his exploits. This also includes frequent calls from superman per a disguised voice (sorry I just can get used to calling him “the blur”) Clark has come back but is at war with his feelings for humans and what he needs to do to be their protector. Lois is really at the center of this as the Clark Kent version also starts to win her over with his charm.

If you haven’t got the gist of this series, there is alot of drama and alot of back and forth tension between Lois and Clark (and superman for that matter). It doesn’t take too long to get with the roll of things but the dram at times tends to be lethargic. My interest comes more when the action starts to stir up with a smattering of odd villains. The series begins with a weird appearance by Mettalico, a reporter who goes rogue for superman wit his meteoric powered heart. The winy Toy man shows up to set off a few bombs here and there, but the strangest comes in an episode overtaken by viral infected zombies tat feels more like a 28 days later tribute. Though don’t get me wrong…..its pretty cool!

So I was trying to put some pieces together and here is what I came up with….Lex Luthor was killed and now Tess Mercer is the resident femme fatale who also runs the daily planet.Justin Hartley reprises his role as Oliver Queen/Green Arrow, being upgraded to a series regular with much of the series opening drama himself. (from wikipedia….Allison Mack portrays Chloe Sullivan, one of Clark’s best friends. She is in love with Clark, although the feeling is not reciprocated. She also happens to be Lois’s cousin which adds to the tension of haring about Lois’s infatuation. Chloe is regarded as “Watchtower” who acts as the eyes and ears for superman and associates. She is a bit of computer genius often hacking into locations per Clarks request.

For newcomers to the series, a few of the names and original characters expected to be a part of the Justice league were left out due to copyright issues. This is also why characters like the “Flash” are referred to as “Impulse” instead. It’s a bit of a goulash of what we’d expect as comic book fans, but these are the legalities of television that as to dance around certain formalities.

This little tidbit  from wikipedia sums up the inclusion and focus on Zod this season: With the ninth season, “Major” Zod (Callum Blue), along with other members of Zod’s military group, are revived by Tess Mercer, though without their Kryptonian powers. Their efforts to obtain those powers becomes the central conflict for the season’s story arc

In summary, this season has turned out to be one of the better ones and a great followup to season 8. Plenty of new appearances, lots of drama and a wholesets of rules that only exist in the superman universe make this a continually exciting tv show to watch. I loved the new inclusion of DC characters and hope that the writers will continue to push th eenvelop by bringing lots more. Amazing TV!