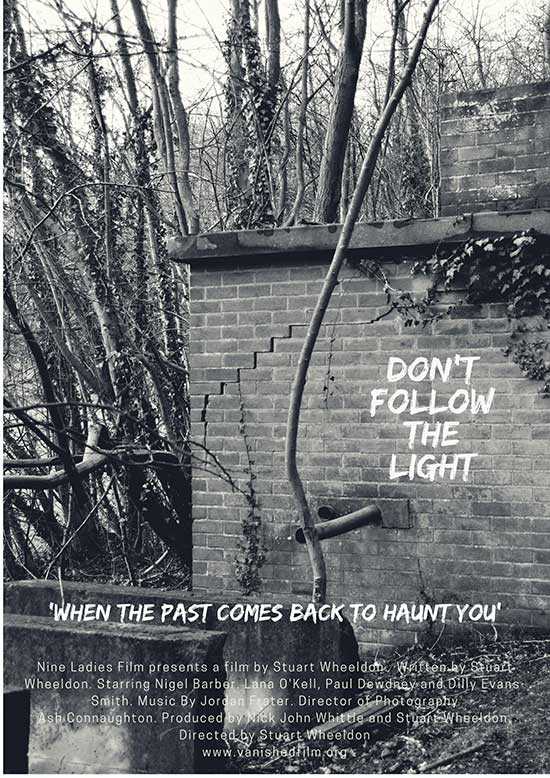 After the success of his powerful psychological horror The Telephone, Derbyshire writer-director Stuart Connock Wheeldon is again to take the world of independent cinema by storm. His new film Don’t Follow the Light today steps into the preproduction phase and will be filmed in and around the Derbyshire countryside in the summer of 2018.
Don’t Follow the Light is a prequel to the thoroughbred filmmaker’s much-talked-about production concept for Vanished, with which we are already acquainted thanks to its cult following on social media. Here is a smart spin on misadventure and mystery delivered amid a gripping quasi-factual mise en scène. Vanished has already attracted the interest and support of industry professionals.

The prequel – which now seeks funding – pre-empts the story of Gillian Gold, who followers of the plot will know as the ‘Banksy of Journalism’ and a tenacious investigative journalist. The clever Hitchcockian echoes of Don’t Follow the Light are heard amid a succession of unsolved murders and the disappearance of Gold herself. The prequel creates an intelligent backstory that we very easily fall into.

A bevy of great actors has already been chosen for production: Lana O’Kell will play Gillian Gold, Nigel Barber will be joining the cast in the role of Dr Williams, Paul Dewdney will play Dr Childs and Dilly Evans-Smith the role of Jessica. All are acclaimed players who bring to the production an engaging mix of experiences and will add heart and soul (not to mention a degree of arid ruthlessness) to the characters.

Nine Ladies Film (owned by Stuart) must crowdfund to begin production. The Film is being produced by Stuart and Nick John Whittle on behalf of Nine Ladies Film. A working budget enables Stuart to better realise this early chapter in the Gillian Gold story, and will allow him to add finesse and sophistication to an already addictive script. He hopes that with the help of a generous public who believe in the power of the ‘independent’ the film’s essence can be expressed in full.