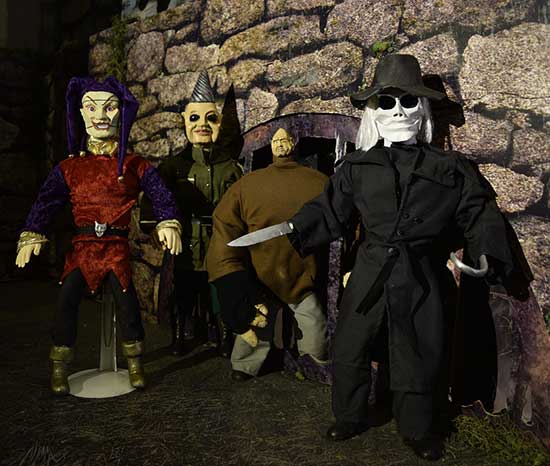 March 26th, 2018 – For decades, producer and director Charles Band’s iconic Full Moon Features studio and distributor has become synonymous with outrageous fantastic film entertainment, offering hundreds of wild, imaginative motion pictures filled with monsters, mayhem, dark humor and genre-bending innovation. Perhaps most iconic in the Full Moon cannon are the diminutive creatures found in Band’s beloved movies like the PUPPET MASTER series, a now 11-picture strong franchise dealing with a troupe of mystical, murderous marionettes, not to mention the malevolent playthings in the DEMONIC TOYS films, the killer cookie in THE GINGERDEAD MAN franchise and the sinister smoking EVIL BONG itself.

A large part of the fan appeal surrounding these creatures are the wave of toys, dolls and merchandise made for the collectors market, including an incredibly popular line of “Replica” dolls made to look exactly like their on-screen counterparts. And while Full Moon has always insured that their previously released Replica’s have been of the highest quality, the studio has just announced plans to partner with a major FX talent to create an even more faithfully designed and constructed Full Moon character replica dolls for the connoisseur collector.

Full Moon is excited to join forces with Las Vegas-based practical special effects artist Tom Devlin for his new “Devlin’s Puppet Factory” imprint, a studio whose aim is to make these incredible Replicas come to life. These carefully created, hand-sculpted dolls are a stem-to-stern faithful recreations of your favorite characters as depicted in the films themselves, right down to the clothing they’re wearing.

“With these Replicas, the Full Moon faithful will see a quality of doll that we haven’t seen in some time,” says Devlin, who outside of running his Vegas-based “Tom Devlin’s Monster Museum”, has also created FX and props for over 100 films (including many Full Moon productions) and for some of the most celebrated Haunted Attractions in the world.

“There’s an attention to detail here, as well as a slew of characters that have not been available or have been limited in the past. The most notable difference they will see is that these are actual 1:1 replicas using existing head molds for the characters we already have and they will be 20-22 inch scale rather than the 15-16 in scale we have seen recently. As far as the costumes go, we are trying to achieve as close to the original look with the materials available. We have gone to the extent of stitching the gold onto Jester’s sleeve as that fabric is not around.

Tom Devlin has been working professionally as a special makeup effects artist since 2001 and, in addition to his work in film, television and Haunted Attractions, in 2011 he appeared as a contestant on season one of the SyFy reality series “Face Off”. He quickly became a fan favorite with his winning horror villain “Teddy Told Me To”, a terrifying take on the teddy bear.

“Tom is an incredibly talented dude and a visionary artist,” Band concurs.

“Full Moon is both honored and excited to have him bring our most famous fiends to life again, creating these faithful, beautifully made dolls that the real fans will lose their minds over!”

The first characters in Devlin’s Puppet Factory’s series will be PUPPET MASTER’s Blade and Jester (retail price: $220 USD each) and Pinhead and Tunneler (retail price $200 USD each). The Replicas will be produced in quantities of 25 units per character at a time, so first come, first serve. Quantities will be re-stocked when they are available. Each Replica will come signed and with a Certificate of Authenticity and will be available ONLY