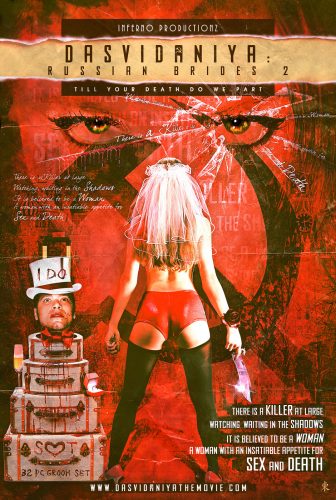 San Diego, Ca. – Inferno Productions releases the Official Grindhouse Trailer for Dasvidaniya: Russian Brides 2 on March 8, 2018 in an homage to Meir Zarchi’s “Day of the Woman”.

Dasvidaniya: Russian Brides 2 synopsis:
Svetlana Veselov (Julia Hazanov) is a sweet, naive exchange student from Moscow plunged into a living nightmare where she must fight to survive. But, what happens when the hunted becomes the huntress and the pain of others brings pleasure?

DIRECTOR’S STATEMENT
I have been in love with film since childhood watching
everything from classic Hollywood, foreign action to
macabre horror. When my avid reader and film buff mother
purchased the complete pay-tv movie channel package, I was
in heaven immersing myself in the fantasy world of 24
hours, 7 days a week international cinema. Films that dealt
with revenge and retribution as in Larry Cohen’s “Black
Caesar, Roger Corman’s “Shogun Assassin” (Lone Wolf and Cub
Series Compilation) or Meir Zachari’s “I Spit on Your Grave
(Day of the Woman) were favorites because of their extreme
visions and unflinching exploration of morality and
justice.

My intention for DASVIDANIYA: RUSSIAN BRIDES 2 was to
create a visceral, sexual, character driven film that
explored the vengeful desires that exist in all of us with
a strong lead actress of actual Russian decent. Julia
Hazanov from Moscow, fortunately, came to us through an
audition for our first horror feature film PENANCE where
she played devious European model/actress Ivanna. I had
fashioned Ivanna’s character after model/action star Milla
Jovovich and created “Dasvidaniya: Russian Brides 2” as a
fake grindhouse trailer that would play during a premiere
event within PENANCE. After premiering the trailer during
the Horrible Imaginings International Film Festival and
launching online marketing material, the positive feedback
convinced us to add “Dasvidaniya: Russian Brides 2” to our
2018 production schedule as an actual feature film series.
-Dante