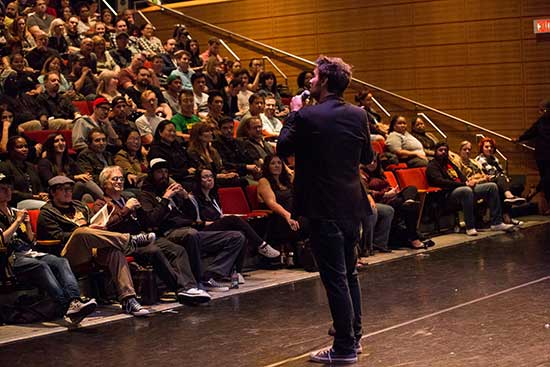 Following our second edition in October 2017, where the festival doubled in size from our inaugural year, The Brooklyn Horror Film Festival will be expanding significantly once again in 2018. Already established as a premier East Coast genre festival, we’re elated to announce we’ll now span eight days, running from October 11-18, 2018. Adding four more days to the schedule means we’ll have the ability to screen more of the best independent genre film from around the world!

Submissions for The Brooklyn Horror Film Festival 2018 are now open on FilmFreeway & Withoutabox for shorts and features in the horror genre–and beyond! The first submission deadline is January 20th and the final deadline is August 13, 2018.

Horror Buff Badges (12 film selections) and Splatter Packages (6 film selections) are now on sale at early bird prices, so act now before they sell-out! Both of these specials offer pre-selection before individual tickets go onsale to the public and include access to our annual pre-fest kick off event!

We’re extremely excited to be partnering with Nitehawk Cinema in 2018 which will become one of our primary screening venues, including Opening and Closing Night. The festival will maintain its tradition of extending our reach to old and new venues across Brooklyn, bringing together the dynamic cinephile culture that sets the borough apart. Stretching eight days the fest will offer the bulk of its screening and events on the weekend, while the weekday schedule will be lighter.

For our third edition we’re also thrilled to announce that our annual HEAD TRIP shorts program, which has spotlighted films that pushed the boundaries and expectations of the horror genre, will be expanding to its own sidebar and will include features as well. The HEAD TRIP program will accept horror films that play with all genres, from sci-fi to fantasy and documentary to (weird) drama!