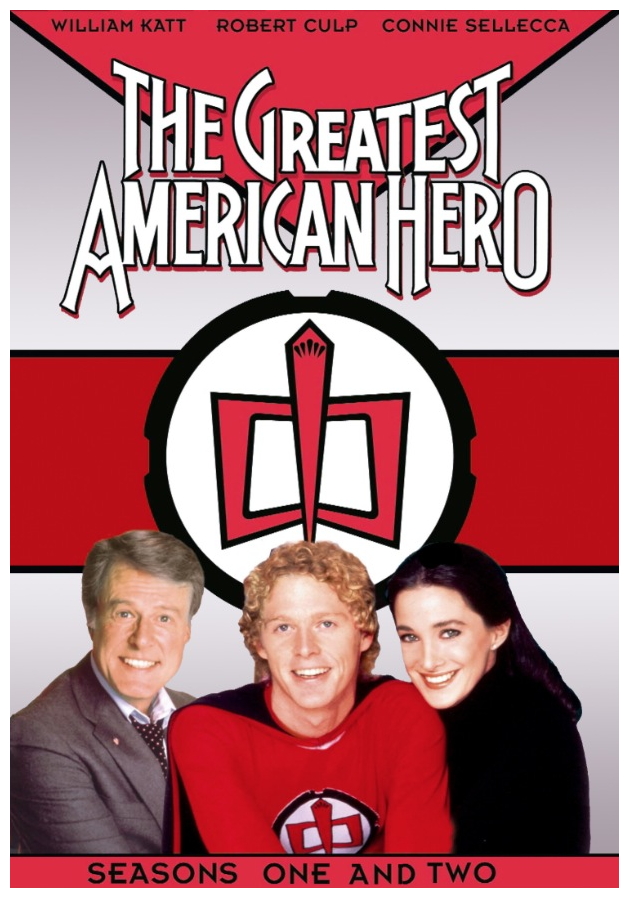 After starting his career as a television scriptwriter in 1968, Stephen J. Cannell created several dozen successful crime dramas from the seventies to the nineties, including The Rockford Files, Chase, Black Sheep Squadron, Baretta, City Of Angels, The A-Team, Hardcastle & McCormick, Wiseguy, 21 Jump Street, Silk Stalkings and The Commish. He was the cheapest writer on the Universal Studios lot, and signed a deal as a head writer for about US$600 a week. “I was at Universal for eight years and I never renegotiated my deal but once. It was late in my arrangement with Universal. There was one thing in my deal that my agent had managed to get in there: I had good fees for my pilots. The reason they did it is that they never thought I was going to write a pilot. So they’d give me US$70,000 to write a two-hour pilot and a US$100,000 production bonus if it ever got made. Then I became the hottest pilot writer at Universal. I was writing two or three pilots a season. I was making US$400,000 a year in pilot fees.” 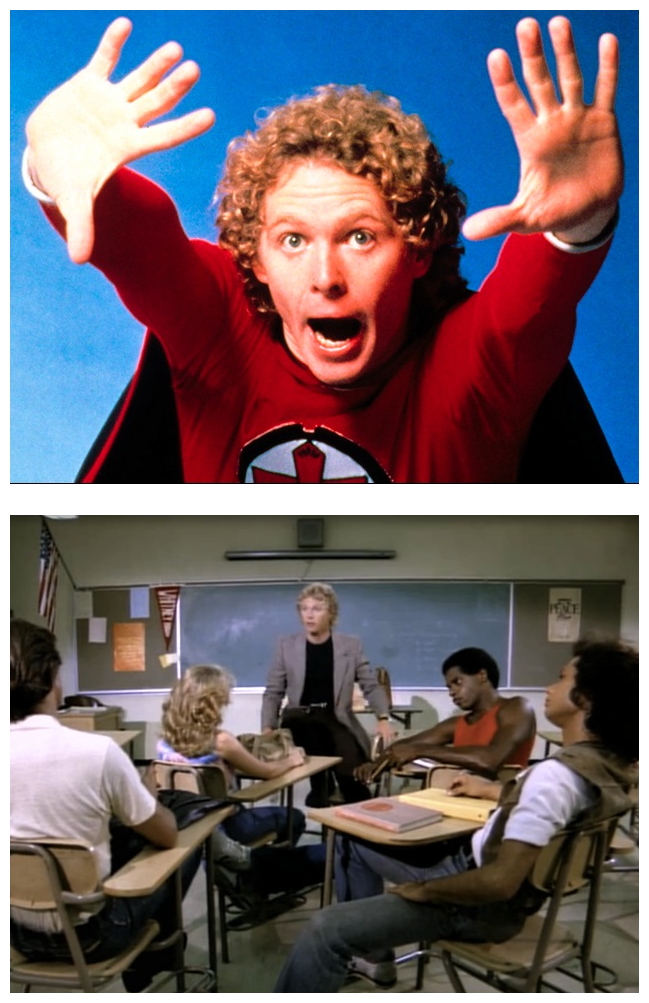 In the process, he scripted more than 450 episodes, and produced over 1,500 episodes. The Greatest American Hero was launched by a feature-length pilot in March of 1981, followed by three seasons (44 episodes) on the American ABC network. The show was billed as a superhero comedy-drama, and introduced the world to the greatest American hero, or so the title would suggest. The two-hour pilot told the origin story and set the tone for the rest of the series. Curly-haired high school teacher Ralph Hinkley (William Katt) is taking his students on a field trip when suddenly the bus he’s driving mysteriously drives itself out into the desert. Meanwhile, FBI agent Bill Maxwell (Robert Culp) swerves to miss the bus and ends up in the same place. Out in the Southern Californian desert at night, they are visited by extraterrestrials who give them a special red suit that was designed specifically for Ralph. 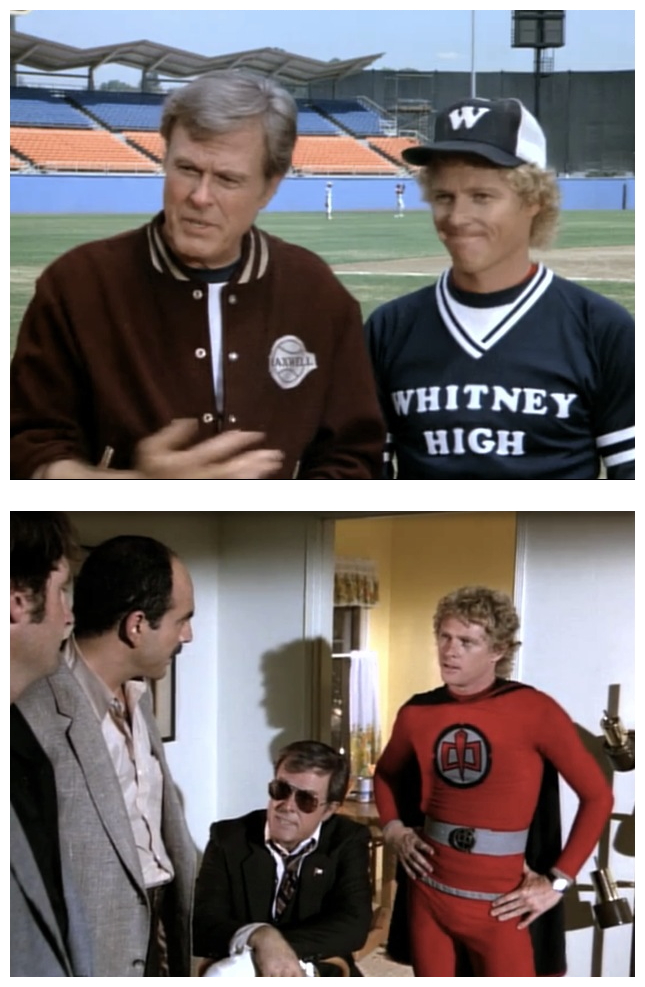 Maxwell goads him into using the superhero costume, and Ralph becomes a reluctant hero for good against the evil forces of the world – if only they hadn’t lost the instruction manual! The following series focused on the misadventures of Ralph as he tries to master the superhero suit left to him by the aliens. The bright red ‘jammies’ endowed him with superhuman abilities like flight, super-strength, invulnerability, invisibility, precognition, telekinesis, super-speed and X-ray vision but, unfortunately, without the instruction manual, it’s all a matter of hit-and-miss. Together with his divorce-lawyer girlfriend Pam Davidson (Connie Selleca) and agent Maxwell, Ralph fumbled and bumbled his way through one crisis after another, all the time trying to make the world a safer place. The extremely popular theme song Believe It Or Not (written by Mike Post and Stephen Gever, performed by Joey Scarbury) pretty much summed up the improbability of an average man that is suddenly endowed with superpowers then asked to save the world. 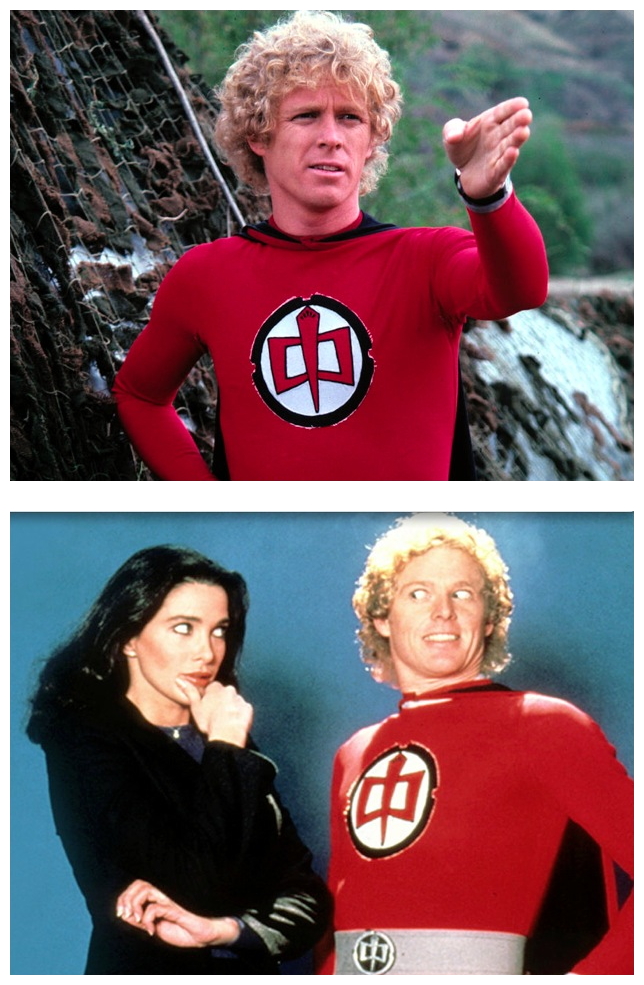 Sadly, this superhero parody was beset by trouble practically from the time it premiered. First, the owners of the Superman copyright threatened to sue, charging that the program had stolen their character, but the lawsuit was eventually dismissed. If anything, the show had borrowed several key elements from DC Comics‘ Green Lantern (whose powers are given to him by aliens in order to fight evil), but certainly not Superman. Superman fans may have cried ‘Thief!’ but others suggested that the program borrowed more from Mister Terrific and Captain Nice, two bumbling superhero situation comedies of the late sixties. Then, during the first season, Ralph’s surname was changed from Hinkley to Hanley, because of would-be Ronald Reagan assassin John Hinckley, and studio executives demanded the name-change to avoid any negative connections. Fans objected to the change, of course, and Ralph’s name was changed back to Hinkley in the second season, but it was too little too late. 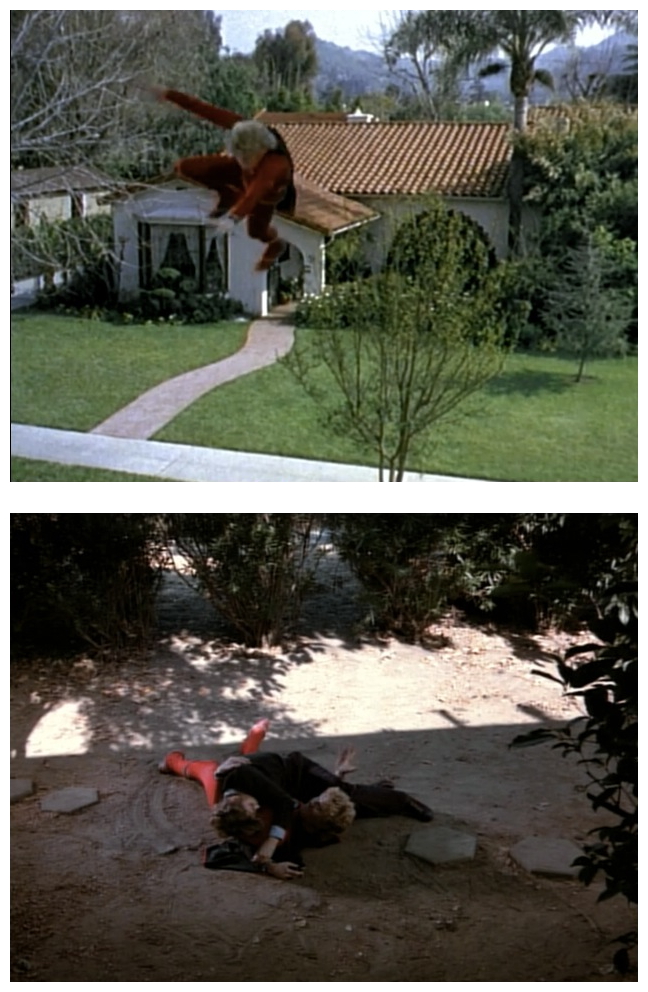 Cannell had initially wanted the show to be about how Ralph dealt with typical human flaws like envy and hypochondria, but the network pushed for more kiddie-friendly stories, with Ralph saving the world from some sort of calamity every week. The quality of the series degenerated fast and quickly became more of a comedy show for children rather than a dramatic show for adults, and the ratings dropped. The first season also introduced us to Kevin Hinkley (Brandon Williams), Ralph’s young son by a former marriage, and Tony Villicana (Michael Pare, future sex symbol), Rhonda Blake (Faye Grant, future rebel leader in the alien invasion series ‘V’), Cyler Johnson (Jesse D. Goins) and Rodriguez (Don Cervantes) were streetwise students in Ralph’s remedial education class. The students shared many of Ralph’s adventures during the 1981-1982 season, but were phased out in the following season, as Ralph and Pam are finally married. The basic setup of every episode would have neurotic government agent Maxwell show up with the problem of the week, Ralph struggles with the suit to solve the problem…and that’s about it, really. 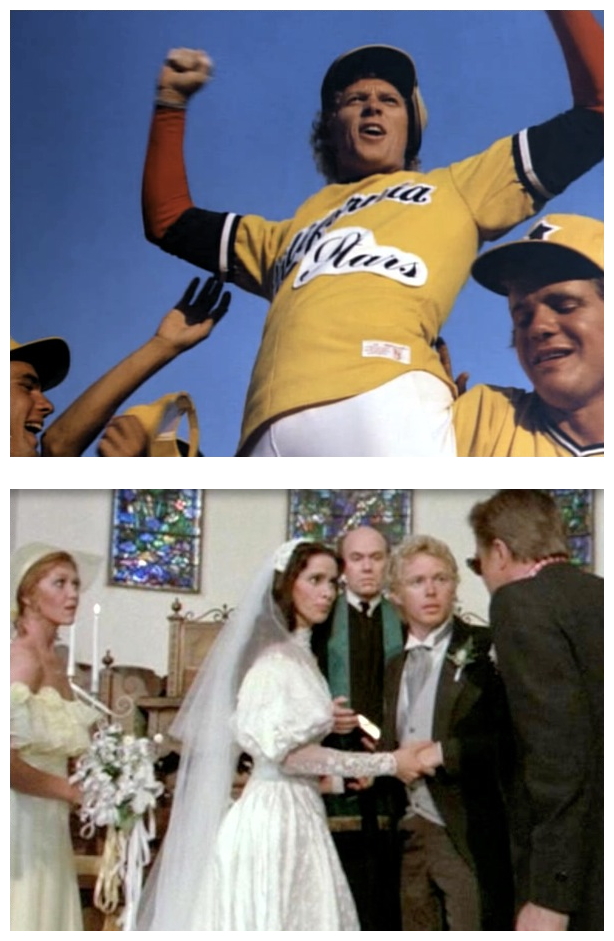 It was occasionally entertaining but, on average, it was about ten minutes of bungling superhero stuff plus forty minutes of filler, accompanied by some of the worst blue-screen chromakey effects I’ve ever seen (Doctor Who season 15 was worse). William Katt – who turned down the role of Luke Skywalker to get spattered with pig’s blood in Carrie (1976) – is mediocre at the best of times, but he does have a goofy kind of charisma. Undoubtedly the show’s best asset is Robert Culp as Bill Maxwell, who makes the show watchable and worth returning to, as he chews up the scenery and delivers the best lines. Ralph and Maxwell were depicted as politically left and right, respectively. Given the radical difference and animosity between those sides in today’s political climate, perhaps we should reconsider their conflict. Ralph is a liberal peace-loving teacher who loves his job, takes time to give his fellow humans a chance, and recognises the inherent good in people. He’s a little naive at times, but he can also think on his feet, so to speak. 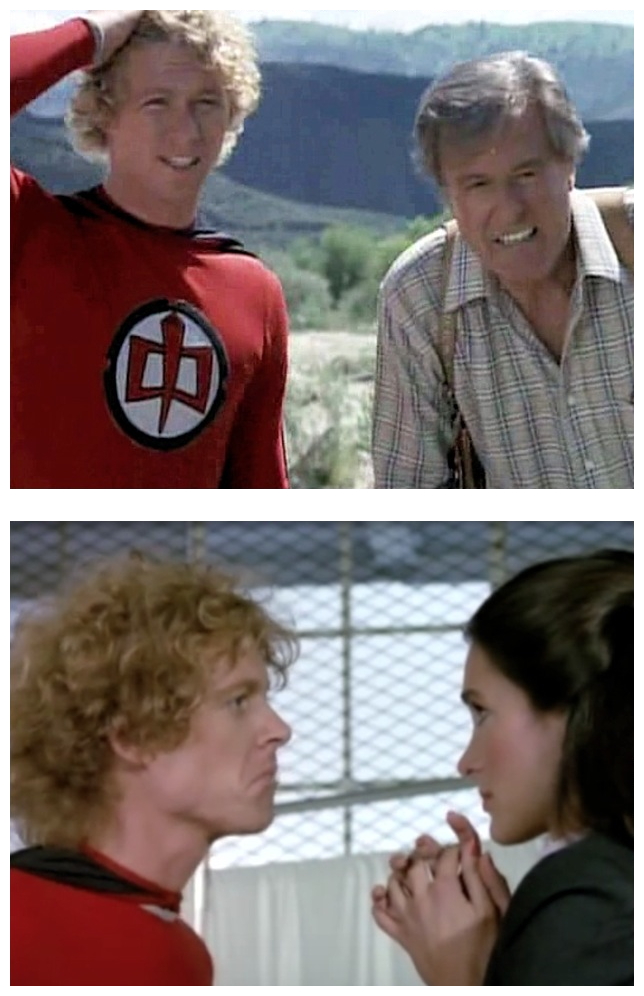 He has relatable problems too, like his supermodel ex-wife fighting for custody of their son Kevin, because she’s rich and famous, and can actually afford to take care of him. On the other hand, Maxwell is a cynical and egotistical misogynist, but he’s also a world-weary FBI agent who has lost his partner, and knows first-hand that the gears of government move slowly because half of them are broken. His mouth writes cheques his body can’t cash, but that’s because he sees himself as a tough guy who despises chaos. He’s far more aggressive than Ralph, and originally planned on using the super-suit to defeat Russia and win the Cold War. Each episode depended on Ralph and Maxwell getting past their differences and work together. Like many science fiction series that flop in the ratings, a core group of fans had developed during its syndication and, in 1986, the principal cast reunited for a feature-length pilot movie commissioned by NBC entitled The Greatest American Heroine. 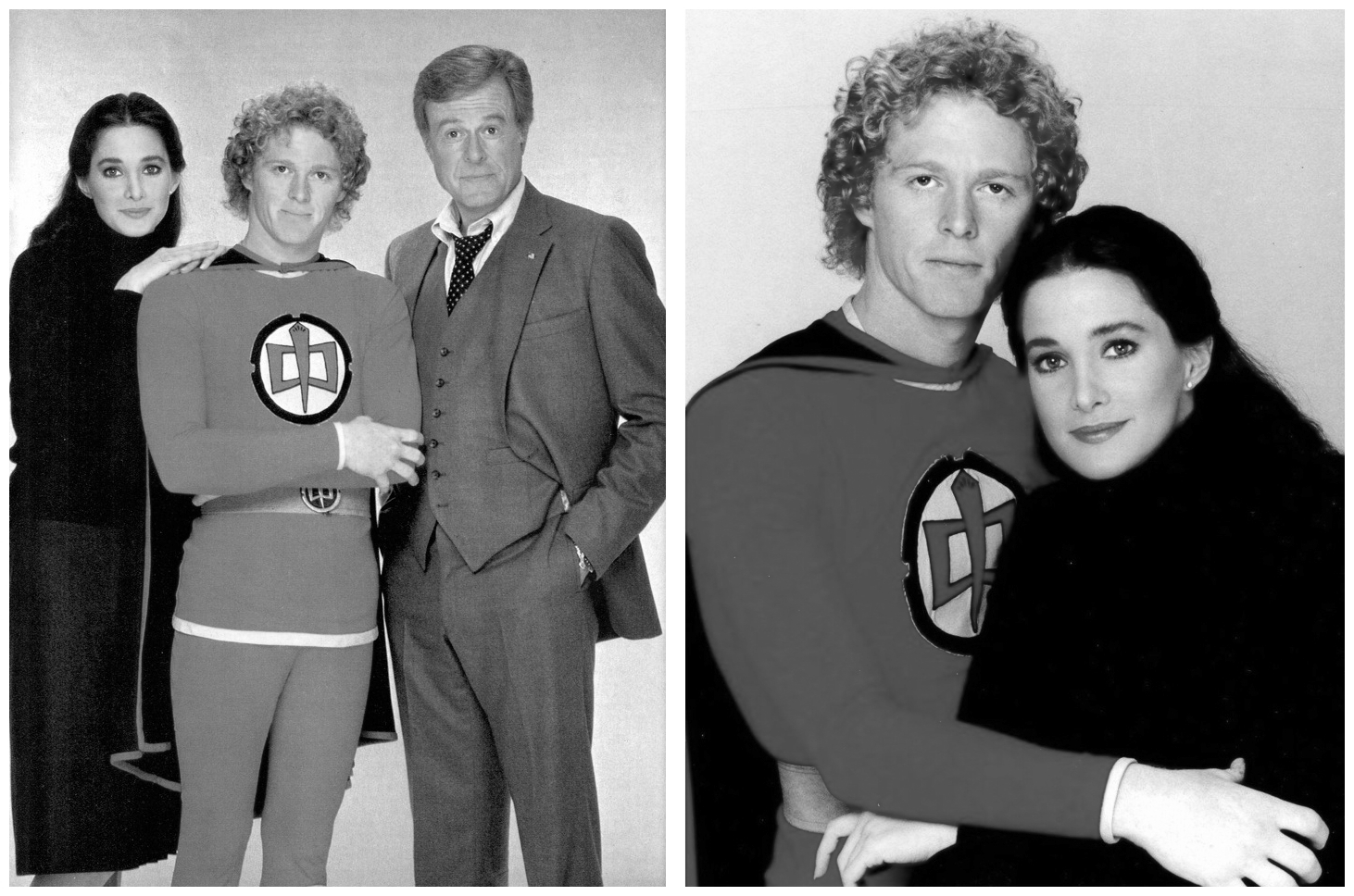 Taking place several years after the final episode, Ralph is now a celebrity after revealing his secret identity, which displeases the extraterrestrials who gave him the super-suit. The aliens order Ralph to find a new hero and, once the transfer is made, all memory of Ralph’s exploits will be forgotten. Agent Maxwell begins researching people with desired hero qualities, while Ralph meets a young lady named Holly Hathaway (Mary Ellen Stuart), a school teacher and foster mother with a passion for the environment and lost kittens. Later Maxwell, Pam and Ralph meet in the desert, where Ralph informs his friends about Holly. Maxwell reacts crudely to having work with a ‘skirt’ just as Holly flies in wearing a new version of the suit especially made for her, and she promises to assist Maxwell any way she can. The original trio say their final farewells, and Holly accidentally pulls the door off Maxwell’s car. Holly learns how to use the suit with Maxwell’s guidance, while the pair try to develop a working relationship. 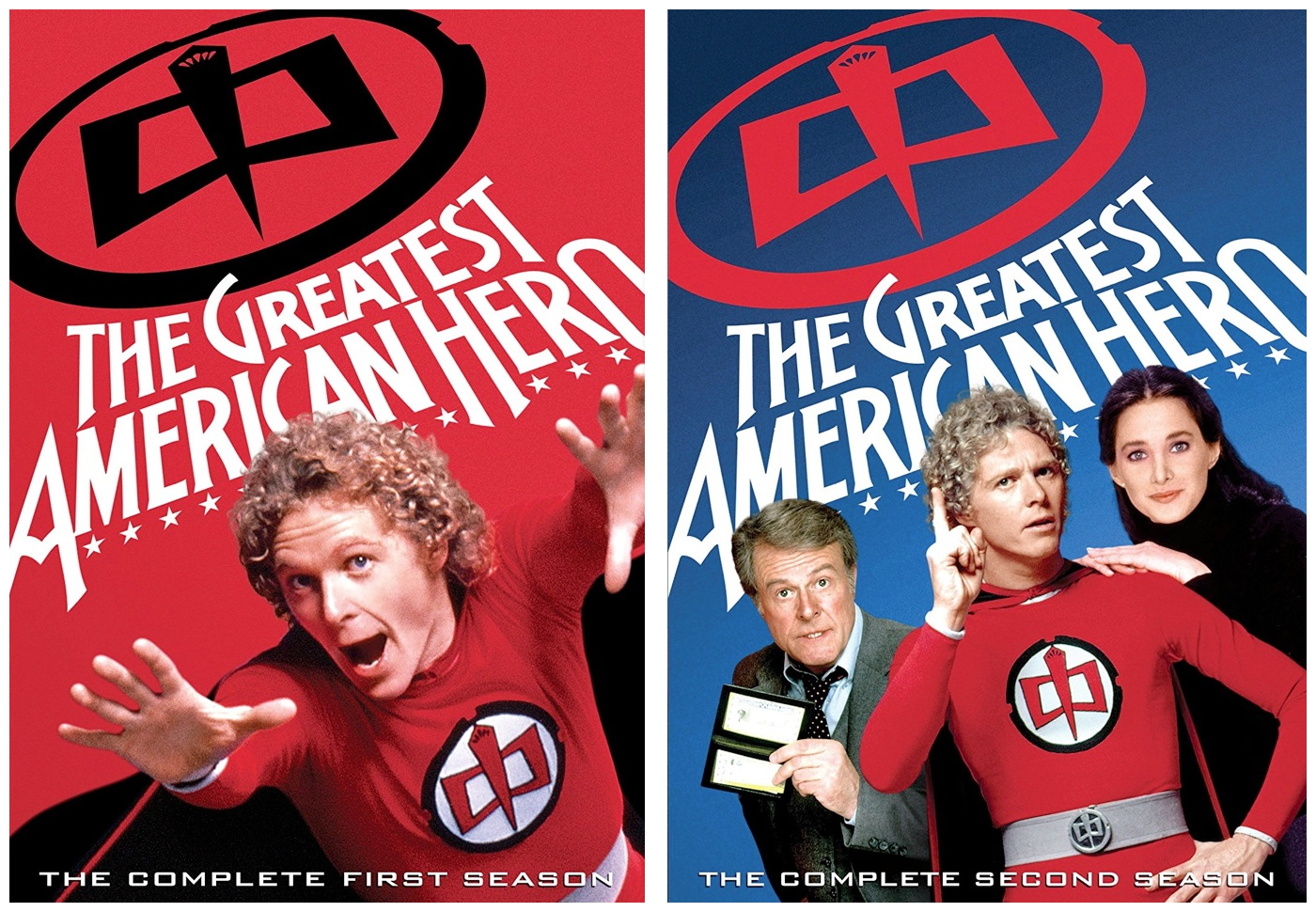 This pilot was so poorly received NBC refused to screen it and the series was stopped before starting, so it was re-edited as the final episode of the original series and added to the syndicated set. Since the series wrapped in the eighties, several attempts have been made to make a feature film reboot, with names like Adam Sandler, Jim Carrey and Jack Black being bandied about as the titular hero. In 2014 the Fox network announced they had ordered a pilot for a new version of the show to be made by Phil Lord and Christopher Miller, famous for creating The Lego Movie (2014). This particular project was shelved and, late 2017, Fox announced a totally new female-led reboot to be written and directed by Rachna Fruchbom and Nahnatchka Khan, focusing on a young Indian-American woman named Meera who loves to sing karaoke. Like all reboots, remakes, re-imaginings, sequels and prequels, I’ll hope for the best but also expect the worst. Now, having demonstrated to you the perils of revisiting the dark depths of eighties television, I’ll vanish into the night, after first inviting you to rendezvous with me at the same time next week when I’ll discuss another dubious treasure for…Horror News! Toodles! 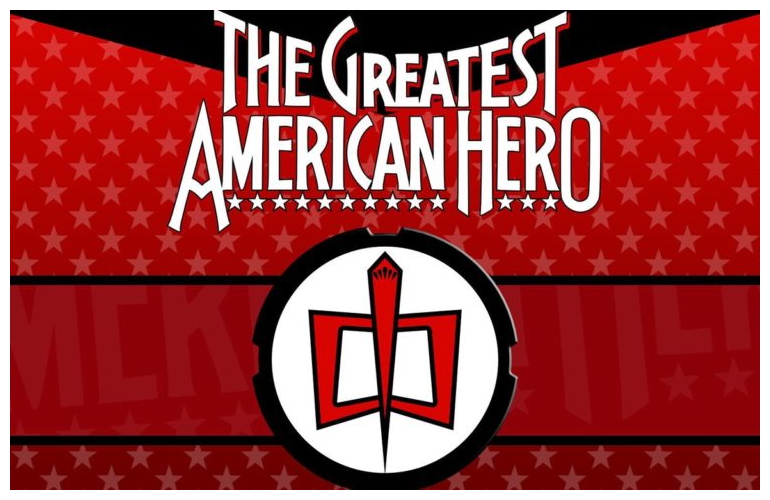