Home | 13 Sprinkles for the Salacious, with a Dash of Distribution is a Recipe for Spellbound

13 Sprinkles for the Salacious, with a Dash of Distribution is a Recipe for Spellbound

Sprinkles, the short thriller that was been billed as film that refuses to die, has at last secured public distribution. Reaping countless awards on the festival circuit, 25 wins in addition to 15 best actress wins for lead Brooke Lewis, the natural harvest would be to secure a viable outlet for public consumption. 13horror.com proudly unleashes Sprinkles as of January 13.

Viewers have the option of enrolling a membership onsite for less than $7/month, renting the little thriller that never dies for $2.99 or purchase for $4.99 in downloadable streaming format.

“We have been blessed to be a part of the film festival and awards circuit for 7 years and we are so grateful to have found the right home for online genre distribution!”

Sprinkles is a short psychological drama/thriller written and directed by Roger A. Scheck (NOBODY LOVES ALICE) and stars Brooke Lewis (iMURDERS) and Don Danielson (BOXES). High-priced call girl, Maura (Brooke Lewis), has a seemingly chance encounter with a client, Gary (Don Danielson), while on a business trip. When Gary turns violent in the midst of their exchange, Maura’s fear slips away as she realizes that Gary has a dirty little secret fetish. Maura, with a secret of her own, reveals that this encounter may not be a random occurrence, but a calculated attempt to avenge a man from sprinkles of her past. Gary learns that he is getting a lot more than he paid for. 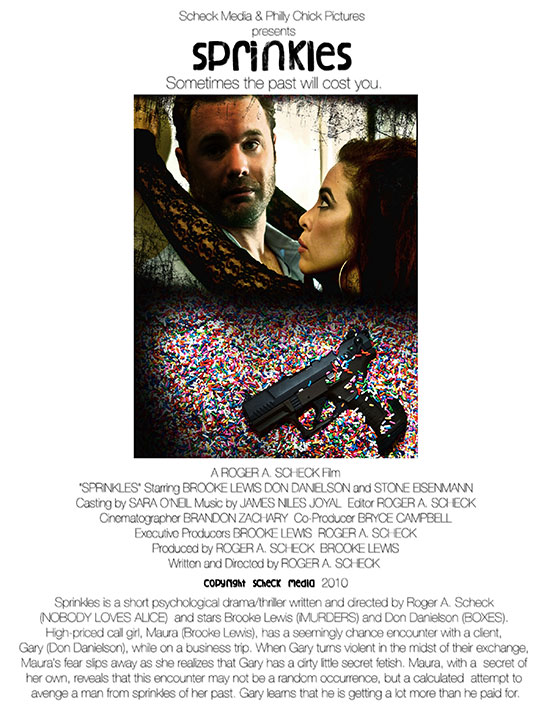 Tags 13 Sprinkles for the Salacious Sprinkles