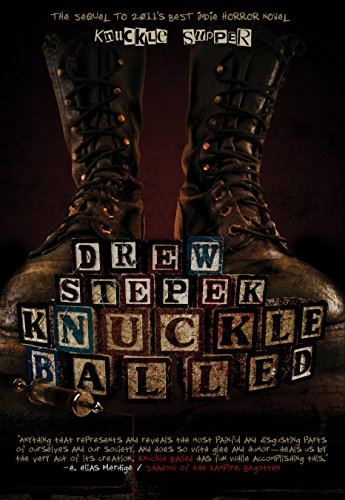 When an unsavory vampire by the name of RJ Reynolds is chosen to ensure the haven of a child cancer survivor named Paulina, he grapples with his own sense of morals. Riddled with tons of twists, turns and the gutter dwellers of society, Knuckle Balled is an expose of the extreme that will render even the most jaded of readers infested with unease.

Knuckle Balled is the first novel I’ve read from Drew Stepek, but far from the first release I’m chartered upon under the Blood Bound Books vein. The publishing house’s modis operandi seems to be an intent for getting under your skin, gnaw at your nerves and unsettle your psyche at whatever costs. Drew Stepek’s novel is no exception and in all my years as a novel critic and many more as a fan, I can honestly state I’ve never chartered anything quite as disturbing as this.

With a special forward penned by none other than April Snellings of Rue Morgue magazine, her introduction provides an almost warning unto the reader for what they are about to encounter. As the plot escalates from RJ’s first-person point of view, the unnerving meter intensifies paragraph by paragraph. With a sardonic, embittered type prose we get to know RJ slowly but surely. At first readers will find his personality off putting which is unusual from a protagonist perspective. Yet as the pages peel back much like layers the lead character begins to redeem himself. As the reader we cannot help but find charismatic and admirable traits about his plight. This is most profound story telling with or without the components of unease.

With a narrative that can often be best described as brutally honest, the vampire’s point of view becomes oddly infectious. His lack of filter about a world spiralling in the abyss is somewhat refreshing aside from the cookie cutter views of rosy red glasses that saturate the eternal optimists. As the action scenes begin to unveil we get not only a glimpse of just how visceral and gory RJ can be but the readership is virtually bludgeoned over the head with the level of gut wrenching, Splatterpunk type grandiose. A scene in the opening pages involving a hapless rat is the stuff inspired of nightmares. Readers are best advised to avoid snacks or meals of any nature at least 30 minutes prior to reading.

Of course, there is some much-needed comedic interlude to provide levity. A fair number of the audience will enjoy the pseudo rock culture references and how RJ’s views are presented about Hollywood. The TJ Hooker, Fletch references may fall dead upon some eyes and are somewhat limiting in terms of market but those who are privy will certainly have a descent knee slapping laugh out of the ordeal.

As the vampire begins to grow on us, we find ourselves finding a certain level of empathy without even knowing it. An odd, endearing interaction with a possum accentuates the likability of the lead character. Collectively we continue to delve on in with less morbid than curiosity to see what possible fate awaits Reynolds.

Some most memorable dialogue volleys back and forth between Cody, a drug dealing jet ski mogul and that of the protagonist. Their rapport and persistent bickering over RJ’s status in the undead is comical and a most welcome break from the level of disturbance in the pages. A laugh among the dread lightens the readers mood, only to be placed in a state of vulnerability for the next onslaught of horror.

In addition, there is some extraordinary inner monologue expose from a character known as The Gooch. This voice is incidentally RJ’s ID to his ego and superego. The addict grapples with succumbing to his demons. On a metaphorical and quite figurative level we witness the vampire come unravelled psychologically. His impulses seem to be the death of him. Suffice to say much of the plot revolves around a drug saturated society. Much of the imagery that encompasses these circumstances are enough to make anyone swear off anything remotely more potent than aspirin ever again.

I could see Knuckle Balled as an effective film adaptation one day. There may need to be a new ratings system developed in this instance. And who would star? Produce? Direct? The works of Drew Stepek is enough to make even Quentin Tarantino cringe and that’s stating it mildly.

Knuckle Balled is most impressive as it serves as a loose sequel of sorts and leaves in cliff hanger fashion that hints upon a possible sequel. Whether following in sequence or as stand-alone endeavors, enjoy. For best results, on an empty stomach.