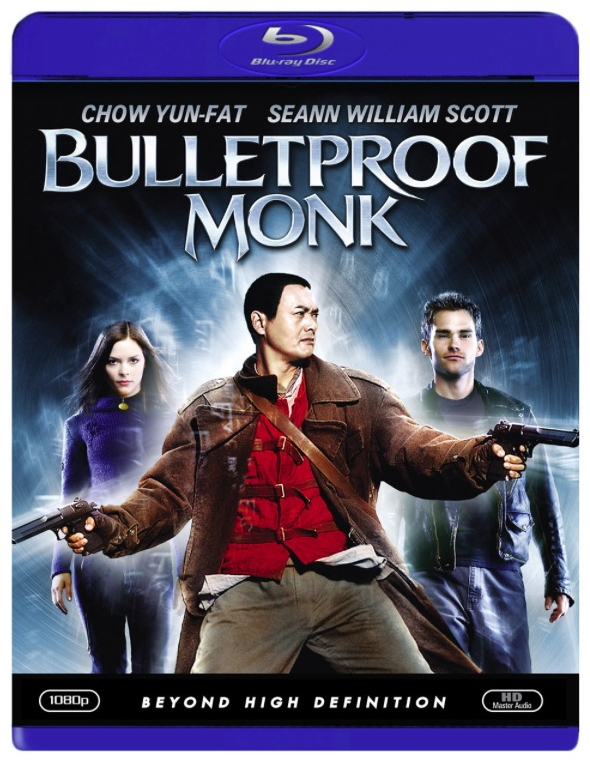 “An ancient scroll that, when recited out loud, grants whoever reads it the power to turn the world into whatever they want it to be. A person deemed worthy to protect the scroll is chosen and that person is granted invincibility which only lasts for sixty years, so another guardian is chosen. During World War Two, in a monastery, the new guardian is chosen. Just as he is given the scroll by the previous protector the monastery is suddenly under attack by some Nazis, the leader wants the scroll for obvious reasons. So the guardian escapes by jumping off a cliff. For sixty years, the Nazi would chase him all over the world. And just as his time is ending he searches for his successor and the one he thinks it is, is a tough street kid named Kar. But Kar is not exactly a righteous person.” (courtesy IMDB)

Comic writer and artist Michael Avon Oeming created a most unusual kind of superhero for Flypaper Press in 1999, and saw his Bulletproof Monk debut in a three-part miniseries that was released by Image Comics. Tim Sale (famous for the artwork seen in the television series Heroes) drew the covers, and Dave Johnson provided some of the interior art. A flip-book entitled Tales Of The Bulletproof Monk, which included two prequel stories with the original material, was released to coincide with the film version in 2003. In the first of the two prequels, we learn that the Bulletproof Monk was an ordinary man who sought the peace and solace of a Tibetan monastery. He journeyed through the war-torn landscape of the Japanese-Chinese war and World War Two to reach the Himalayas. Once there, he studies with a martial arts and spiritual master, and learns to channel his inner ‘chi’ for nearly superhuman powers. When Nazis invade the sacred monastery and gun down the master, the Bulletproof Monk becomes the protector of the Tibetan monks. 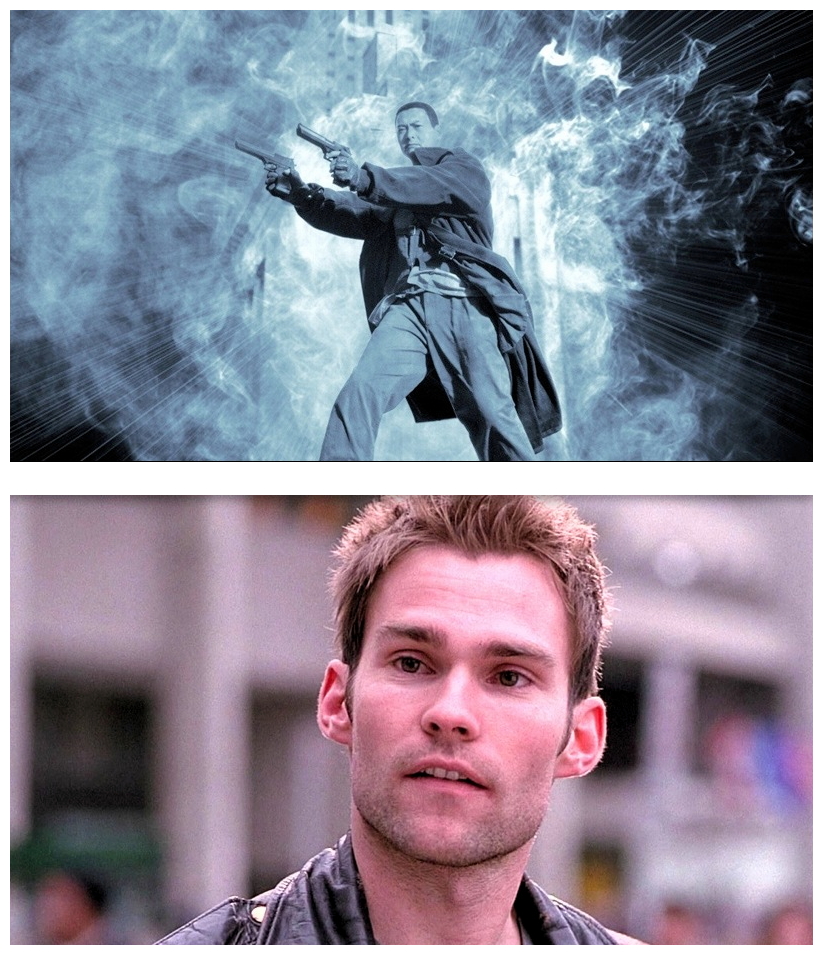 In the second of the two prequels, readers are taken all the way back to the beginning, before the modern-day monk, to the Buddhist monasteries of sixteenth-century Tibet. Here we learn of the first Bulletproof Monk and how he saved the Dalai Lama from the descendants of Genghis Khan. The lead story, from the original miniseries, told of how the Bulletproof Monk came to the United States in search of a replacement, and found a youthful pickpocket named Kar to take his place. Screenwriting duo Ethan Reiff and Cyrus Voris, famous for creating exciting television shows like Brimstone and Sleeper Cell, were called upon to write a feature script. They must have done something right, because they were later hired to write more martial arts films such as Kung Fu Panda (2008) and The Karate Kid II (currently in preproduction). Whiz-kid filmmaker Paul Hunter (I say ‘kid’ but he actually keeps his birthdate a secret) who became famous in the late nineties for directing dozens of award-winning music videos (Justin Timberlake, Lenny Kravitz, Michael Jackson, Aaliyah, Pharrell, Beyonce, etc.) and television commercials, was hired to direct Bulletproof Monk (2003), his one-and-only outing as a feature-film director. 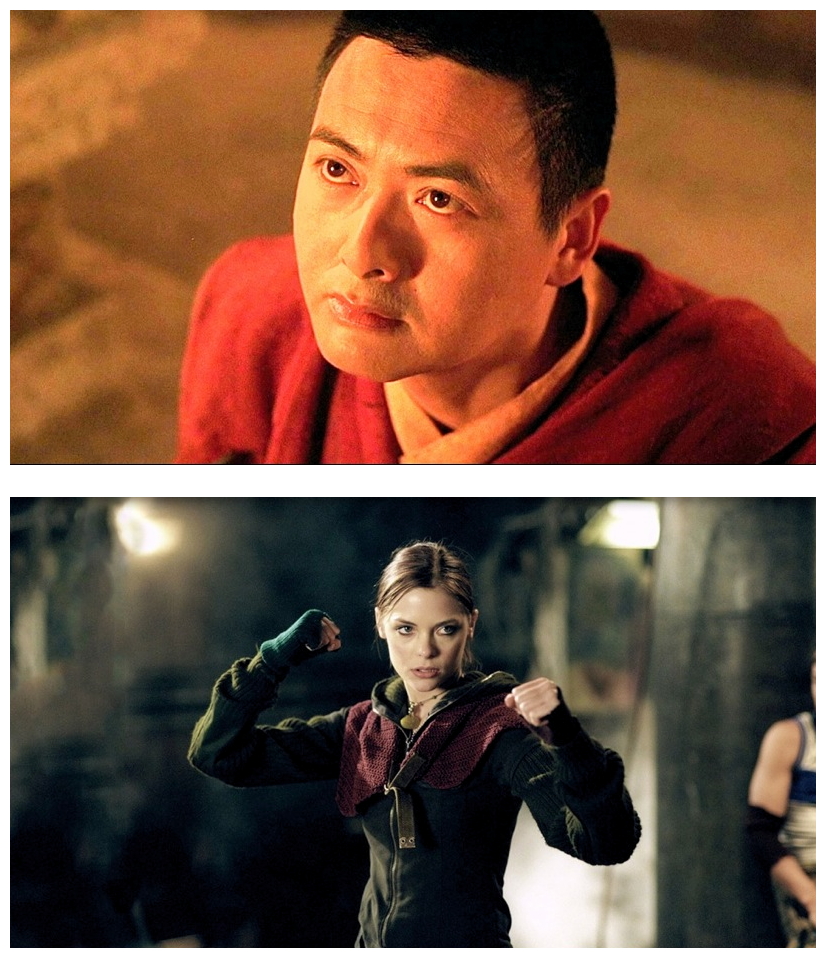 The film begins in 1943 Tibet, where a nameless monk (Chow Yun-fat) is informed that he has fulfilled the prophecies made of him, and he is ordered to protect a scroll which contains knowledge by which the reader becomes the most powerful of all living things. As its protector, the scroll keeps him youthful and impervious to harm until the age of sixty, at which point he needs to locate an heir. His master, the former guardian of the scroll, is killed by German soldiers shortly after the transfer, but the nameless monk manages to escape. We are also informed of an evil Nazi commander by the name of Strucker (Karel Roden) who wants the scroll in order to rule the world. Six decades later in New York City (actually filmed in Toronto, Canada), the nameless monk witnesses a young pickpocket named Kar (Seann William Scott, because Heath Ledger declined) rob a cop, get arrested and quickly escape into the subway. He and Kar literally run into each other, causing a young girl to fall into the path of an oncoming train. 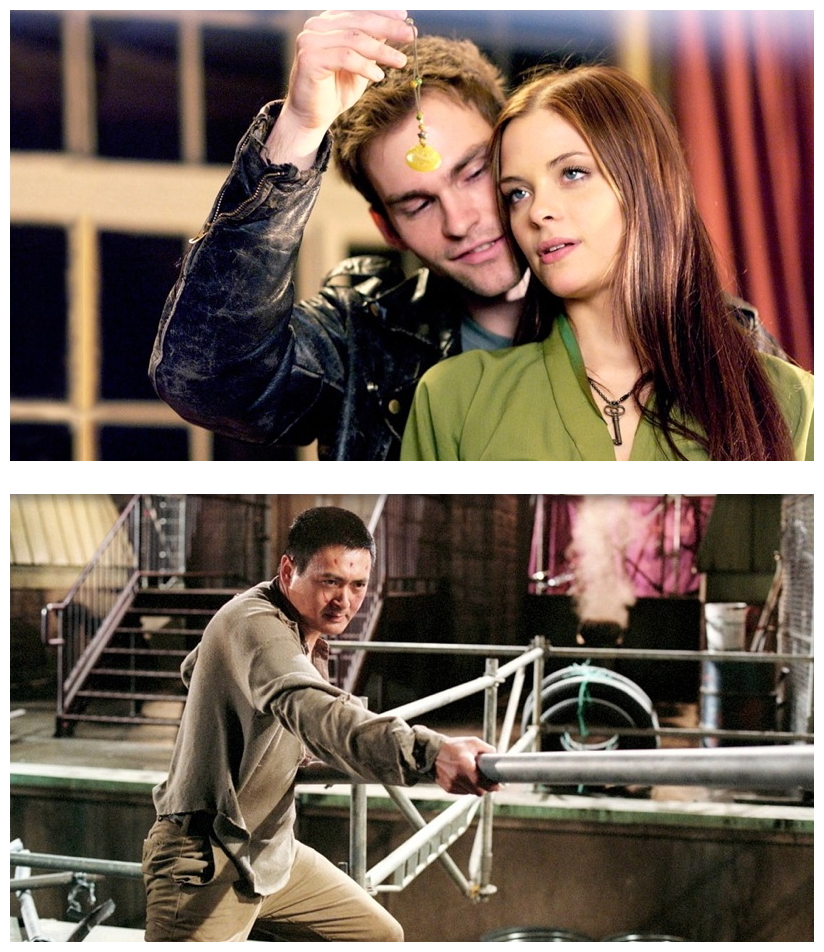 Kar and the monk rescue the girl, and the three escape together. After introducing themselves, Kar steals the scroll from the monk and runs away. The monk believes Kar will be his successor – he inadvertently saves the monk from capture, and he continues to fulfil the prophecies of the scroll-keepers. Later, Kar becomes romantically involved with a sexy and elusive young woman named Jade (Jaime King), and the monk follows Kar home to find him mimicking martial arts movies. Eventually, the three are attacked and the scroll is taken to the leader of the mercenaries, a crime lord named Strucker who is, of course, the Nazi commander that killed the monk’s master sixty years before. When he reads the scroll, Strucker discovers it’s a fake, and the true secret is actually tattooed on the monk’s torso. The hunt is on for the seemingly bulletproof monk and his young friends! 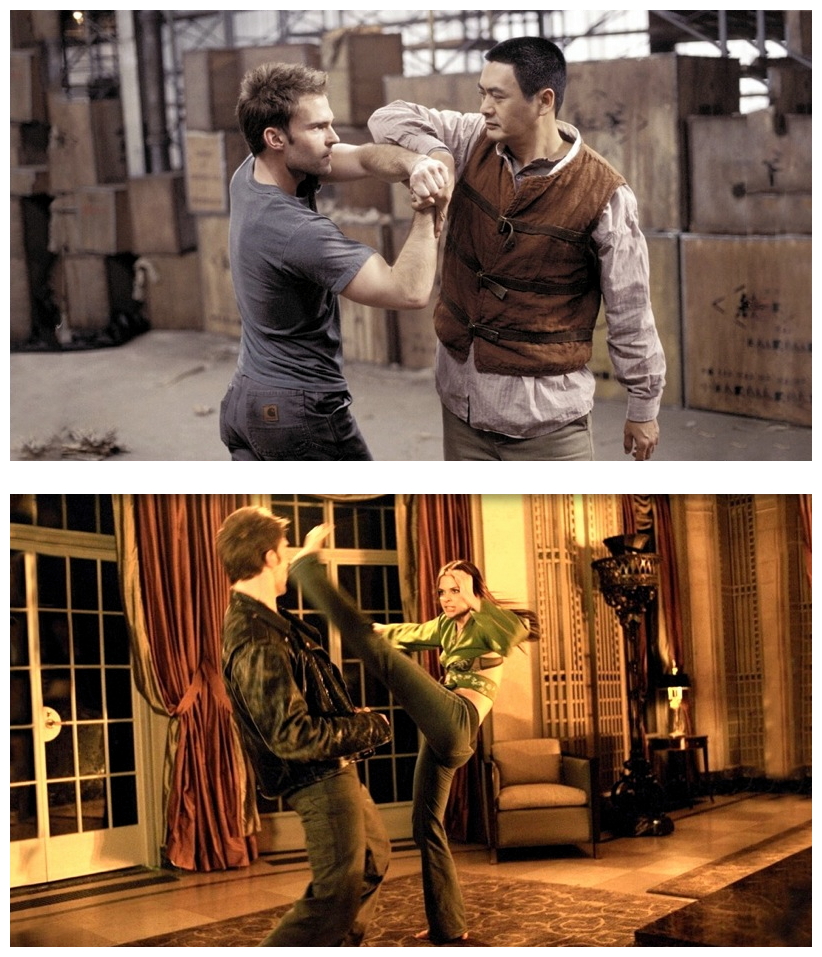 The film version of Michael Avon Oeming‘s popular underground comic book was not well received by critics and fans alike, taking only US$38 million at the box-office, no where near covering its US$52 million budget. Bill Stamets: “The film plays off Chow’s imperturbable persona, but the Tibetan philosophy boils down to the paradox of hot dogs coming ten to a package while buns are sold in sets of eight.” David Edelstein: “Crouching Tiger Hidden Dragon (2000) for the American Pie (1999) audience. They made a ton of junky movies in Hong Kong, but those were dazzlingly fluid and high-flying junky movies. This American retread has the same sort of hack plot but none of the bravura. It makes them look like monkeys, and not bulletproof ones.” Needless to say, there are no plans for a sequel at the present time. It’s difficult not to compare the action-packed fight scenes with those of The Matrix (1999) or its over-marketed sequels at that time. 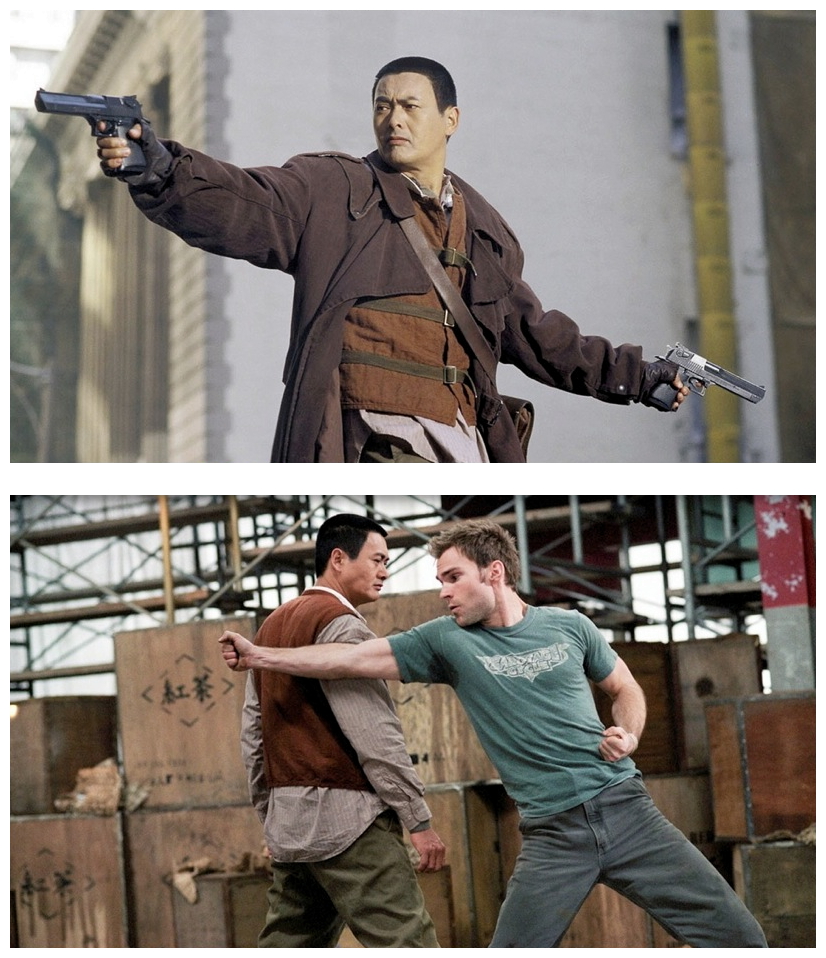 While such scenes in Bulletproof Monk (Burt Ward‘s company Boy Wonder Visual Effects supervised the special effects) are not as polished as those in The Matrix, they’re nevertheless entertaining, with choreography and use of props showing much more promise and imagination than those in the Wachowski trilogy. Bulletproof Monk didn’t get the huge publicity push that The Matrix films got and, consequently, I viewed the film without expectations. As a result, I was not disappointed. It’s silly stuff, of course, but at least it has the humour to go along with that silliness. It doesn’t take itself too seriously, and neither should you. I’ll now take my leave of you with that positive thought in mind, trusting to see you next week after I have scraped the bottom of the Public Domain to find another rotten apple to throw at you from…Horror News! Toodles! 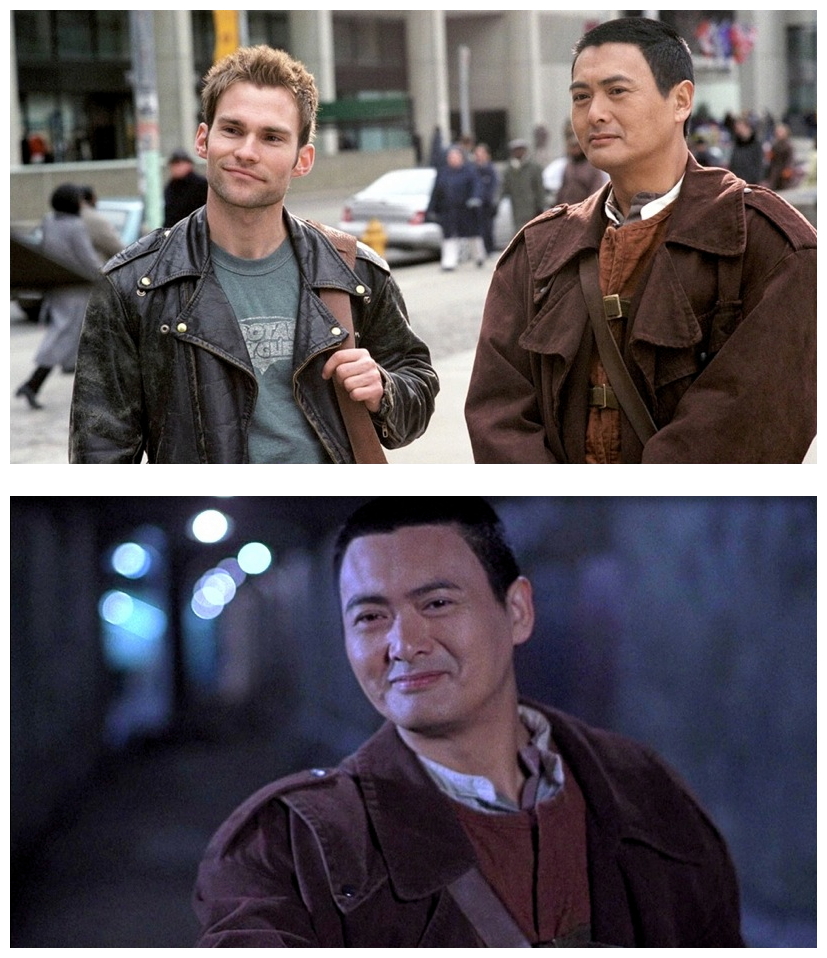