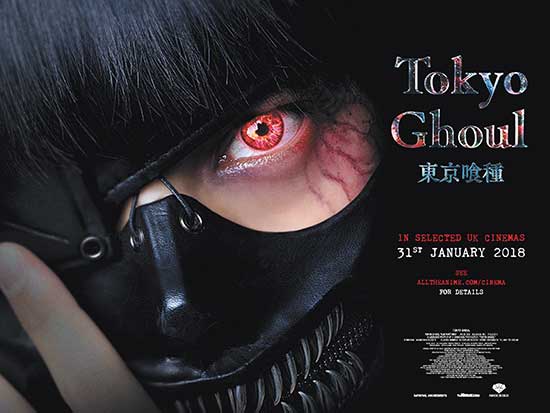 Discover a terrifying new world on our doorstep with a gripping, gory horror based on the best-selling manga. Anime fans and scream junkies alike will savour a twisted dish where the line between good and evil isn’t just blurred, but smeared in blood.

Quiet and bookish, Ken Kaneki (Masataka Kubota) was all but dead to a world living in fear of “Ghouls”: creatures who not only share our skin, but crave its taste. When a nightmarish encounter leaves him a human-ghoul hybrid however, Ken finds himself taken under the wing of those he once considered monsters and fighting to protect them from a vengeful hunger that will leave him asking what it truly means to be inhuman.

A thrilling reimagining of the breakout hit manga, “Tokyo Ghoul” is a gruesome delicacy that not only opens up the original’s captivating world to whole new audiences, but provides a gourmet feast for existing fans – earning deserved praise for its faithfulness to the source material in a climate where fans feel justified in hesitation towards live-action adaptations.

Similar films may be content with positioning the monstrous ghouls as unsympathetic foes of a vulnerable humanity. “Tokyo Ghoul” however, expertly paints its picture a striking moral grey, with examples like Tōka (portrayed by Fumika Shimizu) and her frustrated struggles to live in both worlds, giving us a wonderfully nuanced view of the humanity inmonsters and the savagery in humanity.

Kentarô Hagiwara shines in his feature film debut, harmonising each ingredient on his plate into a unified flavour led by Masataka Kubota and supported by powerful spices like a deliciously creepy performance by Yū Aoi. With clever framing against the narrative’s brutal turns, even the costume choices are at times given an expressiveness that makes them feel like worthy additions to the cast!