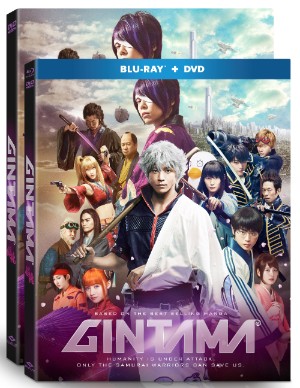 On Saturday, January 20 and Monday, January 22, GINTAMA will be on big screens nationwide in a special two-night presentation in movie theaters across the country through Azoland Pictures. Visit www.azolandpictures.com/gintama/ for the nearest theater and ticket information.

Synopsis:
Based on the best-selling action comedy manga by Hideaki Sorachi, GINTAMA takes place in an alternate Edo-period Japan, where an Alien race has taken control, forcing Samurai to lay down their swords. Once feared as the “White Demon,” former samurai Gintoki Sakata now works as an everyday handyman–until a master swordsman tasks Gintoki and his friends with finding the cursed sword Benizakura to keep it from falling into the wrong hands. Packed with the sword-swinging sci-fi action and offbeat humor that have made the manga a classic, GINTAMA is bound to delight both fans and anyone looking for a journey to a visually-stunning universe where fantastical action lurks just around every corner.

GINTAMA has a runtime of approximately 132 minutes and is not rated.