If you’re a horror fan and do any kind of online social networking, chances are you’ve crossed paths with ZOMBIE! on Facebook, Twitter and/or Myspace. Or maybe you’ve seen the ZOMBIE! logo on t-shirts, or the Youtube videos. You might even play the late-nite horror movie trivia games on Facebook. What’s the deal with ZOMBIE!, anyway? Having followed the Delaware-based entity for years, but never really knowing the whole deal (even though we live just a town apart in the real world), I decided to get some answers. 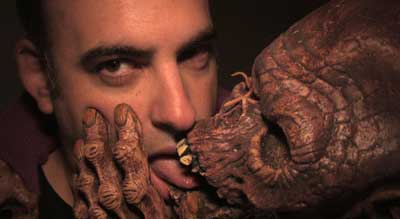 ZOMBIE! (Z): ZOMBIE! is a solo, multimedia project created by me, Eric Weiss – which has actually become an international network of the undead!

HN: ZOMBIE! Is very interactive, with the trivia games and informal polls and things. What role do you see online social networking play in what you’re doing?

Z: Social networking is a huge part of ZOMBIE! Sites such as Facebook, MySpace, and Twitter have given me the opportunity to entertain and globally connect with all of my fans daily.
But, equally important; they are able to connect and network with each other. ZOMBIE! has become a true community of ghoulish friends, fans, and real horror enthusiasts.

HN: How’s the new CD, “The Outbreak” coming along? When can fans expect to get their hands on it?

Z: It’s going well. I’m recording the last batch of songs right now and hope to have it complete in a few months.

HN: The Italian artist Corefolio did the CD artwork (which is amazing). How did that come about?

Z: I found some of his incredible zombie work online and reached out. He has the same twisted sense of humor and passion for horror as I. Without question, I knew he would be able to bring the concepts that I had for the CD to life. Together, we worked on 3 full designs that will be included in the ZOMBIE! album. They are some of the most insane, over the top pieces of horror artwork I’ve ever seen. I can’t wait to share it with the fans.

HN: I read somewhere that Rob Zombie’s lawyers went after you for the ZOMBIE! name, but Mr. Zombie himself called off the dogs. Truth, or urban legend?

Z: Yeah, unfortunately that happened. As soon as he found out that his lawyers sent the letter, he called me to work it out. Rob’s a good guy and made sure they wouldn’t cause me problems in the future. It’s all in the past.

HN: Murder Gear (ZOMBIE!’s line of apparel and accessories) almost seems like its own entity, but at the same time, ZOMBIE! appears to encompass more than a typical horror rock project.

Z: ZOMBIE! was conceived as being much more than a music project, but as a complete multimedia source for horror entertainment – featuring video, art, humor, gaming, clothing, and more. Music has the awesome power to bring a lot of like-minded people together, so it’s great that the ZOMBIE! songs get the most fan attention.

MurderGear.com is the ZOMBIE! online store where fans can devour the clothing, and upcoming CD. I will be expanding it into a lot more ghoulish items in the near future.

HN: The Facebook (ZOMBIE! REAL HORROR ROCK!) and Twitter (ZombieRiot) also run a lot of extreme jokes/one-liners. I know that James Gunn, for example, has gotten flamed on Twitter for posting funny lines that some of his followers felt crossed the line. Has that ever happened to you?

Z: It happens daily, especially on Twitter. But, my humor is actually focused on crossing the line and pushing the boundaries of what’s funny. I really enjoy taking topics such as murder, torture, and necrophilia and turning them into something that others can truly laugh about. My goal isn’t to offend anyone, but to actually relieve the fear and anxiety of these topics in the real world, if only for a moment. It helps people vent. I personally can’t even turn on the news without getting physically sick at what people do to each other, or children and animals. So, even for me, ZOMBIE! is all very therapeutic.

HN: I can totally relate to that. Anyway — I live in Delaware, and have followed ZOMBIE! for a couple of years, first on Myspace, and now on Facebook. Somehow, I’ve never managed to see you live. Do you do live shows around here? Have I just missed them?

Z: ZOMBIE! hasn’t rampaged Delaware yet. I have live performances and events planned for the future, but right now I’m still concentrating on building my audience. Soon!

Z: Not at the moment. I will most likely plan something when I have a definitive release date.

HN: Which do you identify with more: the zombies, or the survivors?

Z: Both equally. The zombies were the survivors at one point.
Depending on the day I’m having, I’ve felt like both.

Visit Eric online and get all the links and goodies at: www.ZombieRocks.com.