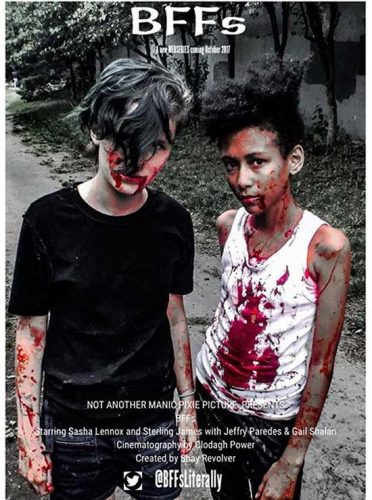 BFFs, a new horror web series.
BFFs follow Wren Starr and Celeste Michaels , two tweenage girls , who become friends after Wren moves in with her Uncle Nick next door to Celeste. The girls bond over Wren’s mothers recent arrest and Celeste’s single moms  recent cancer diagnosis. After months of growing close the girls sneak out to go Trick or Treating, a decision that will change both of the girls lives forever.
BFFs is a horror thriller , season one is told in three chapters each with eight 10 minute episodes. Chapter one is currently shooting in Boston, MA and is scheduled to be released this fall after its web series festival run.

The show is filmed using an all female crew, with 75% of the cast being female. It showcases two strong teenage girls who don’t talk about boys and are strong, fiery young ladies who fight the monsters in their lives together. They’re more damn hell in a dress than damsels in distress, a refreshing take on the final girl/ female savior trope in horror films.

The shows website will launch on Friday, July 7th with a trailer release scheduled for July 14th. The cast , crew and creator are available for interviews, features and profiles on set starting July 24th. To request a full press kit , promotional photos or more information email bffwebseries@gmail.com . The show is produced by Not Another Manic Pixie Picture Productions.